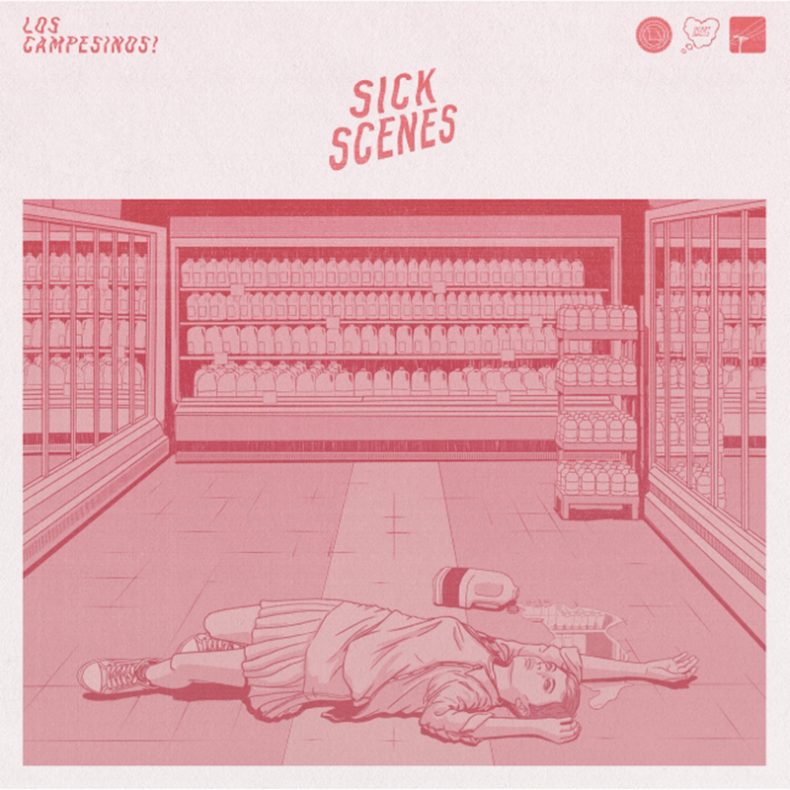 We, the band Los Campesinos!, today announce our new album Sick Scenes, to be released worldwide via Wichita Recordings on February 24th, 2017. It is our great pleasure that to celebrate the release of our 6th album we will also be undertaking a three week tour of North America, including our first West Coast shows in over five years.

We recorded the album, co-produced by long-time collaborator John Goodmanson and band member Tom Bromley, during Euro 2016 in Fridao, Portugal. The album exists as an expression of the pent-up aggression we felt due to being inactive for so long, but it’s also a celebration of just getting to be a band, of getting to play music with our friends. Thematically the record is concerned with fumbling for personal relevance while trying to be a better person. Repressing anxiety and attempting to function while constantly maintaining the perfect two-beer buzz. It is set upon a backdrop of non-league football, prescribed medication, and crumbling hometowns. These truly are the Sickest Scenes.”

On the writing of the follow up to the band’s 2013 album No Blues, lead guitarist Tom said: “This was the longest the band had gone without releasing any music.  That was for a whole bunch of reasons, but I also deliberately tried to resist putting ideas together for as long as possible so I could feel excited about writing again.  I was touring with Perfume Genius in 2015 and I think a combination of long van rides listening to music with too much time to (over)think, as well as getting to play guitar on PG’s beautiful and weird, affecting songs every night got me all excited about working on song ideas again.  So halfway through the tour we had a fortnight off in Seattle where I put together all the ideas I’d been collecting and started the process of a new album.”

The first song to be taken from the album is entitled “I Broke Up In Amarante,”. Of it, the band says:

Tom: ‘In March 2016 I went to Melbourne to produce a record for a band called Ceres.  We went super deep on the details and textures for their album, but it was the songs themselves that left me with a hunger to do something with a similar energy.  I’d had the chorus sitting around for years, but it was only when I had the idea to use it as a major-key payoff to a minor verse that it made sense, and played over a loop of a distorted bowed saw, it all came together really quickly.”

Gareth: “The song’s about battling with bad mental health, trying to comfort and reason with yourself over something you can’t control. Specifically it’s about how my main coping mechanism was to keep myself constantly drunk in the blistering heat of Amarante while being failed by a largely terrible international football tournament.”

Los Campesinos! will travel stateside early next year for a lengthy run of tour dates; please see the below itinerary.  All tickets are on sale as of 9am local time, Friday November 11th.

*with special guests Crying
All gigs are all-ages unless otherwise noted.