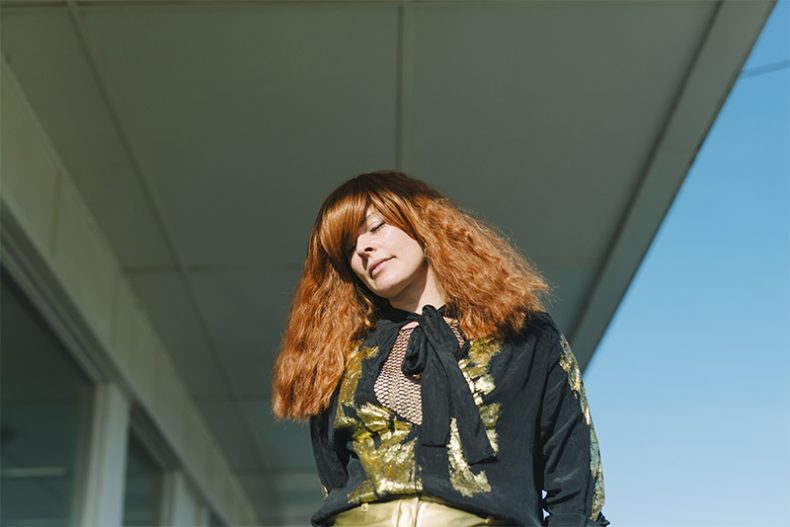 Little Scream’s forthcoming record Speed Queen began as bits of prose written while touring Cult Following across North America—observing the slow entropy of the US, ruminating on her own low-income upbringing in a flyover state, and, as Laurel Sprenglemeyer (Little Scream) says, “taking it all in from the privileged position of being a new Canadian.”

Ahead of that record’s October 25 arrival via Dine Alone Records, Little Scream now shares “One Lost Time”, accompanied by some words about why listeners will find the names of indigenous territories in Speed Queen’s credits.

“On Columbus Day and Canadian Thanksgiving, I wanted to explain why I chose to mention the indigenous territories that Speed Queen was recorded on. I am fortunate enough to live in a community where land acknowledgements have become so common that there is skepticism about their value. Many indigenous people point out that they let settler culture off the hook by offering a means of lip service without action. I take this to heart. There is a difference between truth and reconciliation. And mentioning a truth is far from reconciling it.

I acknowledge this, and yet I still included mention of these places by name in my album credits. It’s a small and imperfect gesture towards truth.

I know that my record is going to go to many different places. Places like my hometown in the American Midwest where acknowledging the indigenous history of the land isn’t commonplace. Places in Europe that don’t have the same history of settler culture, and who might not think about the implications of it in North America. Even the act of writing the acknowledgement forced me to sit down and educate myself about the most basic histories of Montreal, the Ottawa region, and Vancouver Island. It got me closer to thinking about the privileges I’ve had living and working on this land. It didn’t get me closer to figuring out what reconciliation might look like. But it did get me closer to knowing I will support it however I can.”

Speed Queen was recorded on unceded Algonquin, Anishinabek territory in Studio Quyon, on land of the K’ómoks and Tla’amin Nation in Studio Hidden Well, and in studios Skybarn, Mixart, and The Bridge on traditional territory of the Kanien’kehá:ka.

On her third album, Little Scream offers us a reflection on class and poverty in America. Speed Queen began as bits of prose written while touring her last album across North America. The title, which alludes to the opiate crisis, actually refers to a washing machine. Little Scream says, “When you’re struggling, nothing says you’ve made it more than getting your own washing machine. Speed Queen is about the dream of making it, and feeling desperately close but missing it.”

The album is gently accusatory. She doesn’t let herself or any of her listeners off the hook. In “Privileged Child”, she reminds wealthy people who like to adopt the style of the poor and working class that “poverty’s a feeling money just can’t buy.” On “Dear Leader,” she reminds those opposing migration that “when the waters rise, it’s gonna be you, Miami,” warning them that when they’re needing help, “…you will ask your God, but he’ll be busy getting risen, and the rich will be too busy buying stock in private prisons—that’s where they’ll send you for talking about socialism.” The biting commentary served with a sense of humor softens its presentation but doesn’t detract from its power. This is a theme throughout Speed Queen, where humor and warm heartedness prevail despite some of the darker subjects touched upon.

Montreal-based songwriter and guitarist Laurel Sprengelmeyer has been playing music under the moniker Little Scream since 2008. In 2011, she released The Golden Record, which Pitchfork dubbed “a stellar debut” and NPR called “an absolutely captivating record.” It was included in NPR’s Best Albums of 2011 list, and the New York Times evoked its “hints of the divine,” including Little Scream as one of the best new acts to follow at SXSW. Her second album Cult Following, which features guests including Sufjan Stevens, Mary Margaret O’Hara, and Sharon Van Etten, earned Little Scream new band of the week status from The Guardian and received five stars from Bust Magazine. Cult Following included the catchy Prince-inspired single “Love As A Weapon” which, according to the liner notes, she and her sister hoped would buy their mom, a cleaning woman in Illinois, “unlimited gift certificates to the Red Lobster.”

Since the release of Cult Following, Little Scream has stayed busy as a member of Richard Reed Parry’s Quiet River of Dust, touring with and co-writing songs from the albums Vol. 1: This Side of the River and Vol. 2: That Side of the River. A natural collaborator, she has appeared as a vocalist and/or guitarist on recordings for The National, The Barr Brothers, Will Butler, and Saltland, among others. She has appeared on two Red Hot compilations as well as charity singles to benefit the ACLU, Planned Parenthood, and Standing Rock.