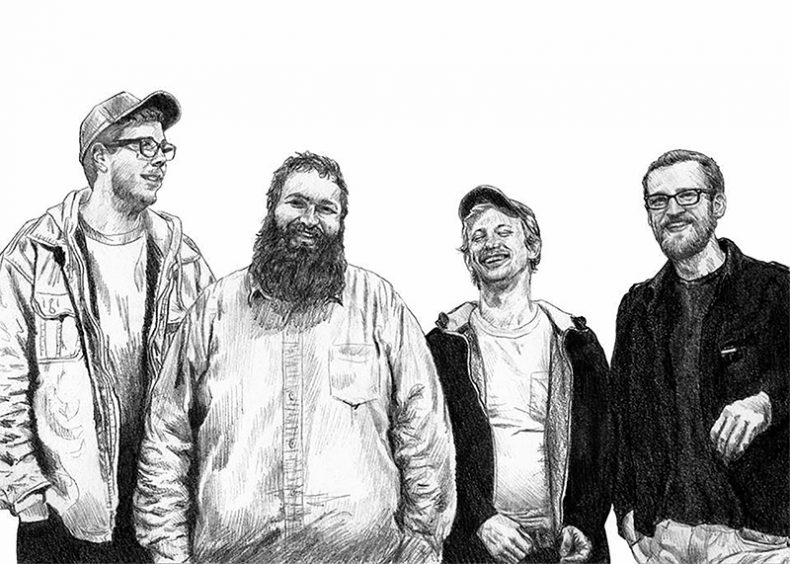 Left & Right have got The Yips, and we’re all excited about it. In anticipation of the album, the Philadelphia based quartet are sharing “Sleep Show,” the clever and crushing first single. The Yips, the band’s third full length album will be released on September 16th viaWarHen Records. Following the release of their recent surprise Pivot Foot EP and their last full length Five Year Plan back in 2014 (Infinity Cat/WarHen), the band spent nearly the entirety of last year on the road, taking only a short break to record The Yips together with in demand producer Justin Pizzoferrato (Krill, Dinosaur Jr, Speedy Ortiz), a bleak album that feels very much world weary as a year spent touring can do.

The Yips is a giant leap forward for Left & Right in both execution and subtle maturation. Focusing on dynamic songwriting, the record takes the loud-quiet-loud formula and turns it on its head, roaring between hushed “college rock” and crushing sludge pop with a snide charm of everyday relatability. First single “Sleep Show” is a surreal song about the idea of an audience coming to watch you sleep and the sensibility (or lack thereof) of performing shows night after night. Opening with a lumbering low end dirge, the song is heavy and hooky, full of brilliantly sleepy vocal melodies, wry lyrics, and slow crawling riffs that break like tidal waves. It’s a clever song with big guitar hooks at every twist and turn.

Speaking about the single’s lyrics, Left & Right’s Daniel Merchant shared, “I wrote “Sleep Show” in the middle of the night on Sean from Rozwell Kids’ parents’ couch on some tour last year. It is about a reoccurring dream I have where I wake up to find remnants of an audience scattered around as if I had been the attraction. Popcorn on the floor, folding chairs in the closet, etc. I think it concerns my feelings about the relationship between the audience and the artist and which is ultimately driving the other. Unfortunately I missed Sleep when they came to Philly but I heard it was a great show.”