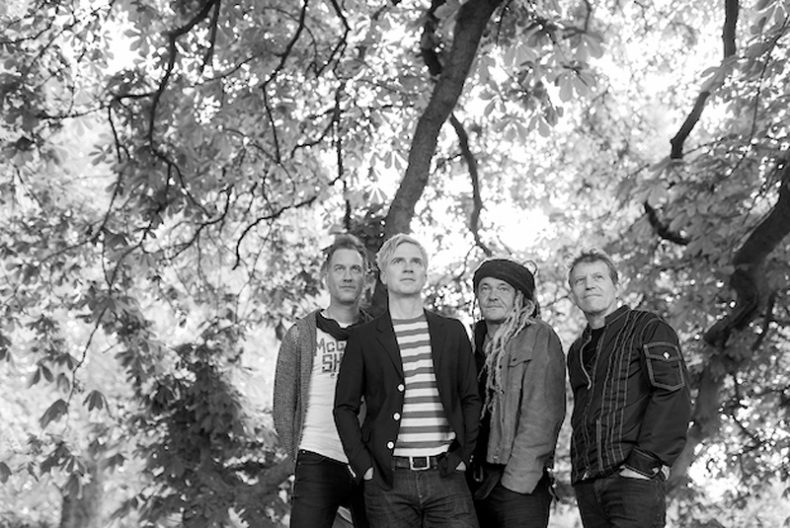 Nada Surf has announced today’s premiere of “So Much Love,” the latest iconic single from their long-awaited new LP, Never Not Together. The song is available for streaming and download now. Nada Surf’s ninth studio recording and first in almost four years, Never Not Together arrives via Barsuk on February 7.

“So Much Love’ is a song that celebrates good will between people,” says Nada Surf’s Matthew Caws. “Sometimes it can be hard to remember that it’s there. But it’s all around us. A little tolerance and acceptance can be built on. Small gestures add up. We’re good at love and being kind. It comes naturally to us, but so do other things. You just have to keep looking for the right way to lean.”

Never Not Together was heralded last November by the crashing new single, “Something I Should Do,” now available via streaming and download and accompanied by an official video streaming now at the official Nada Surf YouTube channel. “As you’d probably expect from this consistently reliable band, [“Something I Should Do” is] catchy and instantly likable,” BrooklynVegan enthused.

“Looking For You” – available now at all DSPs and streaming services – followed in December, joined by a unique animated video filmed by the members of Nada Surf and streaming now via YouTube.

Never Not Together sees Nada Surf – Matthew Caws, Daniel Lorca, Ira Elliot, and their longtime friend and collaborator, Louie Lino – continuing to pursue their humanistic vision of the world through hooky, catchy rock songs with sharply drawn, yet tenderly felt, lyrics. Recorded earlier this year at the legendary Rockfield Studios in Monmouthshire, Wales, the wide-ranging collection revels in the group’s ability to evoke and reflect grand and intricately wrought emotions, whether through sweeping guitar solos or hushed-whisper vocals. Songs like the spectacular “Looking For You” and the shimmering mid-tempo “Just Wait” are empathetic, warm, and powerfully urgent, marked by Caws’ ongoing lyrical quest for 21st century love and connection.

“We’re all together, and that’s just the way it is, and the way it always will be,” says Caws. “That’s the sacred truth of it.”

Long hailed for their unique ability to create deep emotional bonds with their live audience, Nada Surf will celebrate Never Not Together with a major world tour. U.S. headline dates begin January 14 at Seattle, WA’s Neptune Theatre and then travel through early February. The band will be joined throughout the tour by an array of special guests, including Apex Manor, John Vanderslice, Aaron Lee Tasjan, Why Bonnie, and The Lees of Memory.

From there, Nada Surf will cross the Atlantic for an eagerly awaited European tour, resuming in Cambridge, England’s J2 on February 25. The tour includes stops in the United Kingdom, Germany, Spain, Ireland, the Netherlands, Belgium, Austria, Italy, Switzerland, Sweden, Norway, and Denmark and two Canadian dates in Montreal and Toronto this May. Additional dates – including top-billed festival appearances – will be announced soon. For complete tour details and ticket information, please visit www.nadasurf.com.

by Claudia Minardi on October 26, 2018
Laura Gibson Goners Barsuk Records Goners, the sixth studio album by Laura Gibson, is unlike anything she’s ever released before. Gibson explains that her newest record is, “about [...]
6.0