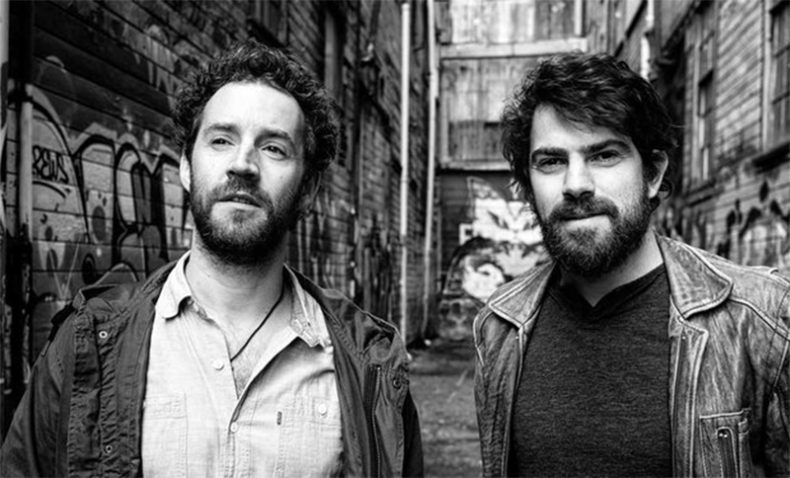 With a new album, Apocalipstick, and run of Canadian tour dates on the horizon, The Harpoonist & The Axe Murderer, aka Shawn Hall and Matt Rogers, are sharing the new video for album cut “Forever Fool” courtesy of Indie 88.

“Forever Fool” is “a story of revenge, transition, and thrills- this one told against a glamorous backdrop of sexy dancers, neon lights, and dark shadows,” says director Stefan Berrill. “The story follows the takeover of a 1970s nightclub from a set of backroom greasy gangsters by two badass babes who carry with them an air of vengeance and authority.” The video “exemplifies the power of the get back, take back, want back, demand for equalization,” claims Hall. “This one just so happens to be wearing stilettos.”

Due out March 24, Apocalipstick came together from the desire for companionship, the endless pursuit of tone, the strength and glue of family, and above all, the love and admiration for each other’s skills. Whether it was operating a tape machine with Jedi precision, creating meals that fuelled us, or belting out glass shattering ‘ohs’ and ‘ahs’, it was the elbow grease of many individuals that brought this project to life.

Framed by psychedelic landscapes and world-ending jam-outs, The Harpoonist & The Axe Murderer ignite the gritty, blues-rock grooves they have been recognized for by adding drummer John Raham (The Be Good Tanyas) and keyboardist Geoff Hilhorst (The Deep Dark Woods) into the melting pot as well as the golden sounds of Dawn Pemberton, Andrina Turenne, Alexa Dirks (Begonia), Ben Rogers, Khari Wendell McClelland, Erik Nielsen, and Ricardo Khayatte. Add equal parts soulful, sweaty vocals, and biting nasty guitar and you have an album perfect for any doomsday date-night.

On March 29 The Harpoonist & The Axe Murderer will continue their cross Canada tour, taking Apocalipstick on the road with Ryan McNally, and Leeroy Stagger And The Rebeltone Sound. Full tour dates can be found below.

Hall and Rogers have received considerable recognition in the last few years. Their previous album, A Real Fine Mess, was nominated for a JUNO Award as Blues Album Of The Year, Video of the Year and Best Blues Album at the Western Canadian Music Awards, and the duo were also nominated for four Maple Blues Awards and won ‘Blues Act of the Year’ at the SiriusXM Indies in 2013. They’ve also had songs featured on television shows such as the ‘The Good Wife’, ‘Blue Bloods’, and the aptly named TV movie ‘Lizzie Borden Took An Axe’.