SPILL NEW MUSIC: THE SO SO GLOS ANNOUNCE NEW FULL-LENGTH ALBUM, KAMIKAZE, VIA VOTIV MUSIC ON FRIDAY, MAY 20 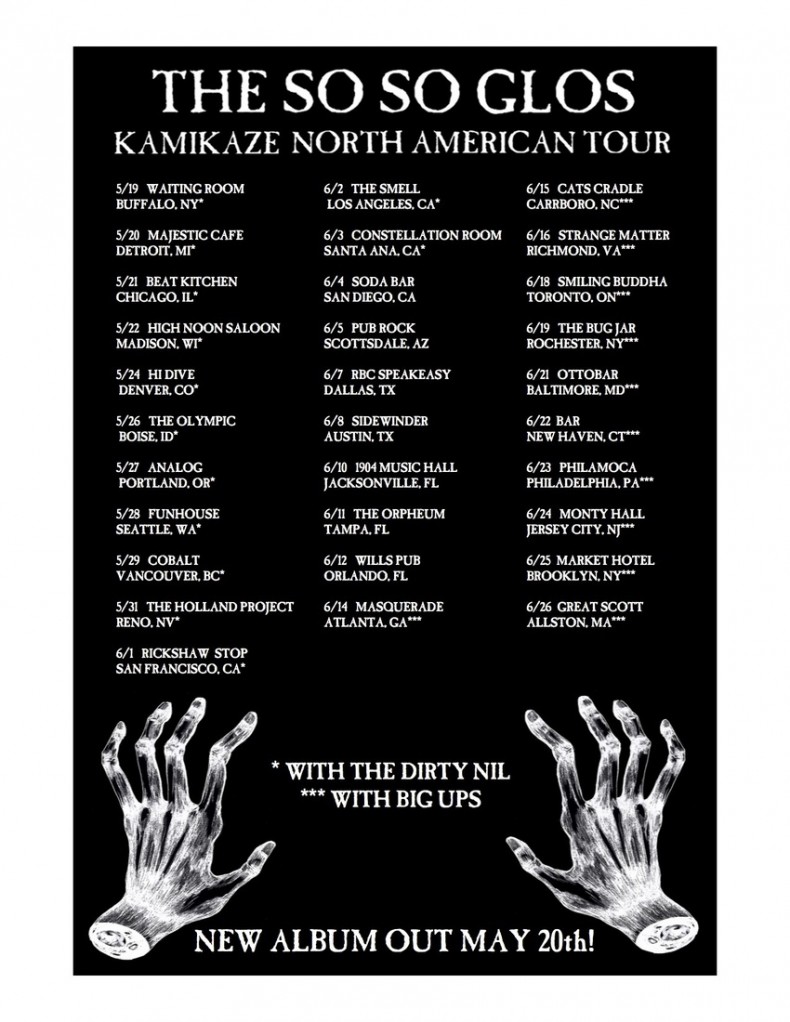 New York City-based rock band The So So Glos have announced a full North American tour with The Dirty Nil and Big Ups. Beginning on May 19 in Buffalo, NY at Waiting Room, the tour will take in over a month of dates, visiting markets such as Detroit, MI on May 20, Chicago, IL on May 21, Denver, CO on May 24, Seattle, WA on May 28, Los Angeles, CA on June 2, Austin, TX on June 8, Toronto, ON on June 18, Philadelphia, PA on June 23, Brooklyn, NY on June 25, and culminate in a performance at Great Scott in Boston, MA on June 26. Tickets for the upcoming tour go on sale at Noon EST tomorrow, Friday, April 1, and more information can be found via The So So Glos’ official website, http://www.thesosoglos.nyc.

Recorded with John Reis (Rocket From The Crypt, Drive Like Jehu) and mixed by Mike Mogis (Bright Eyes, Rilo Kiley, Cursive), Kamikaze features some of the Glos’s rawest songwriting yet that includes themes surrounding heartbreak, hurricanes, feminism, climate change, nervous breakdowns and more. There’s a glimpse into one band member’s stay at an inpatient mental rehabilitation center (“Inpatient”), songs about feeling disillusioned by the concept of moral compromise, the dungeon that is the music business (“Fool On the Street”), and songs about sticking to your ideologies (“Missionary”).

On the forthcoming album, the follow-up to The So So Glos’ critically acclaimed Blowout from 2013, the darks are darker and the lights are lighter, the loud louder and the quiet quieter. Kamikaze is an album that finds the band narrowing its focus, kicking harder and faster, all serving to punctuate their subversive merging of sarcasm with sincerity, spirituality with social awareness. “Kamikaze is about using our self-imposed weapon,” says So So Glos frontman Levi Zaru (Aleksander). “Which is music, which is art, which is freedom of expression, which is respect for the individual … all that is a weapon.”

Being surrounded by the apathetic, plastic, too-cool attitude that permeated New York City’s underground of the early-‘00s changed the Glos bros’ approach to punk rock forever—inspiring them not only to dive head-first into Brooklyn’s ethos-first scene of DIY all-ages spaces but to write charged-up fight songs prying open big questions about the society around them, to write anti-establishment calls-to-action.

“That concept of self-awareness, acknowledging it in order to combat the problems you see in yourself and the world, is a theme that runs through a lot of our music and our message,” Aleksander continues, reflecting on the path to Kamikaze — a path that has made it all the more embedded with meaning.

As always, though, the members of The So So Glos – Levi Zaru (Aleksander) (lead vocals, bass), Ryan Zaru Levi (guitar, backing vocals), Matt Lasser-Elkin (guitar), Zach Assa-el Staggers (drums) – have made a perfect party soundtrack, if your idea of partying involves screaming against the world of distractions and psychic destruction that surrounds us.

The So So Glos will be touring North America extensively in 2016 in support of Kamikaze. Dates below.