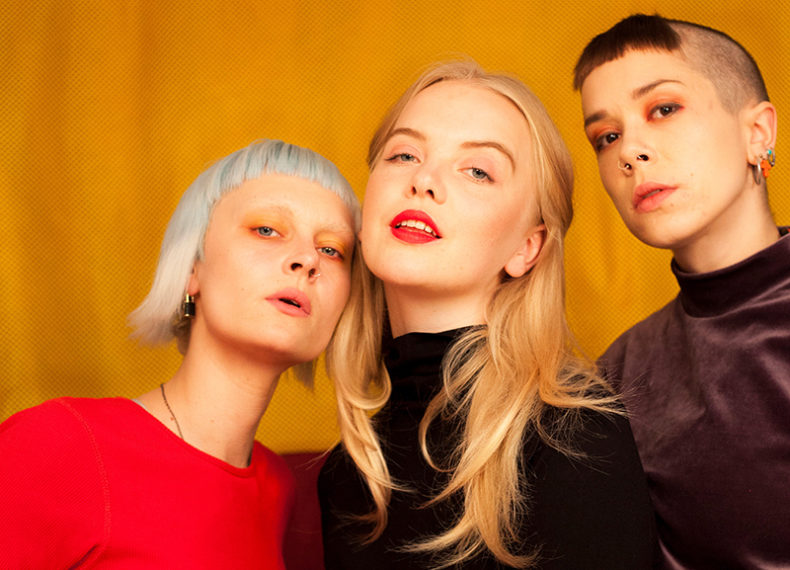 London-based and British/Icelandic born punk rock trio Dream Wife are gearing up to release their long-awaited self-titled debut album later this month. Today they share a new single “Hey Heartbreaker” alongside an incredible video animated and directed by Joe Prytherch, more widely known by his moniker Mason London and his role as the former art director of Boiler Room. Envisioning a dystopian near-future depicting the band as robot performers held in a sleazy bar against their will, Prytherch’s imaginative direction and distinct art style in “Hey Heartbreaker” is stunning. Taking loose inspiration from Anime, and the acclaimed Akira, the Robo-Dream Wife’s performance and breakneck escape offers a substantive and cinematic music video.

Dream Wife On The New Video

“We were super excited to work with Mason London to bring the world of ‘Hey! Heartbreaker’ to life. Collaboration is integral in our approach to Dream Wife, and we encourage different creative ideas and paths to mix with our own vision.”

“It’s uncanny to watch these mechanical, parallel versions of ourselves rock out and then break out. We like to think that in another reality our robot versions are continuing their adventures; perhaps in the forest, perhaps plotting for a robot revolution, perhaps playing wild, secret rock shows to other robots.”

Since forming in 2015 as a college art school project, Dream Wife – a name chosen as commentary on society’s objectification of women – have become one of the foremost up-and-coming bands out of the U.K. They have garnered praise for their early releases and their ferocious live shows, which saw them sell out venues across U.K. and Europe, tour the U.S. with the Kills, and play festival stages all over the world. Now the band are gearing up to release Dream Wife on January 26th, 2018 via Lucky Number. Pre-order Dream Wife physically here or digitally here.

Dream Wife are known for their ferocious live shows, and will play two Brooklyn gigs later this month that are not to be missed. They will also tour throughout UK, Europe, and Australia over the next few months. See below to find a show near you, and get your tickets HERE.