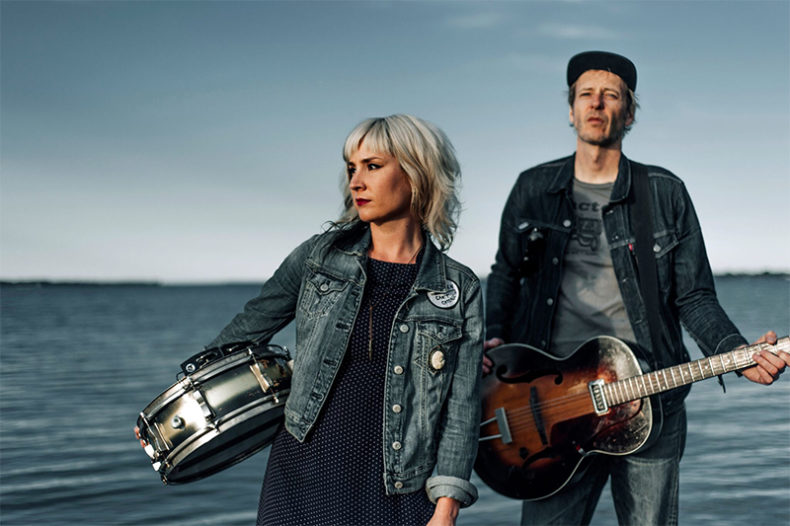 Toronto’s catl. recently released their 5th LP Bide my time until I die…’ in France this past May on Beast Records and in September on Romanus Records in North America. They have been incessantly touring Europe and the U.S. in support of the record and have just released a video for their single ‘I’m On’. The song is a reminiscence of lost youth that’s been twisted and distorted by various drug dalliances. The video by filmmaker Sally Cinnamon, shot in glorious Super-8, definitely touches on those sentiments. The recording shows the band in all their stripped down 2-piece glory with Jamie Fleming on the ’48 Gretsch and Sarah Kirkpatrick singing and slamming the stand-up drum kit.

The duo will be joining All Seeing Eyes from Dayton, KY on Dec. 21st right here in Toronto at the Monarch tavern for a little pre-yuletide rock ‘n’ roll throwdown. All Seeing Eyes features Johnny Walker of the Soledad Brothers, who along with a little band called The White Stripes, helped to define the new wave of garage-rock spilling out of the Detroit area in the late 90’s early 00’s. They just released their killer debut album called In Us We Trust on Mauvaise Foi Records out of France. This show will be their first performance in Canada and is not to be missed!

catl.’s have a few more tour dates before the year is out, so check them out and enjoy their brand spankin’ new video for ‘I’m On’.

SPILL TRACK OF THE DAY: CATL – “BABY, YOU ALL WRONG”