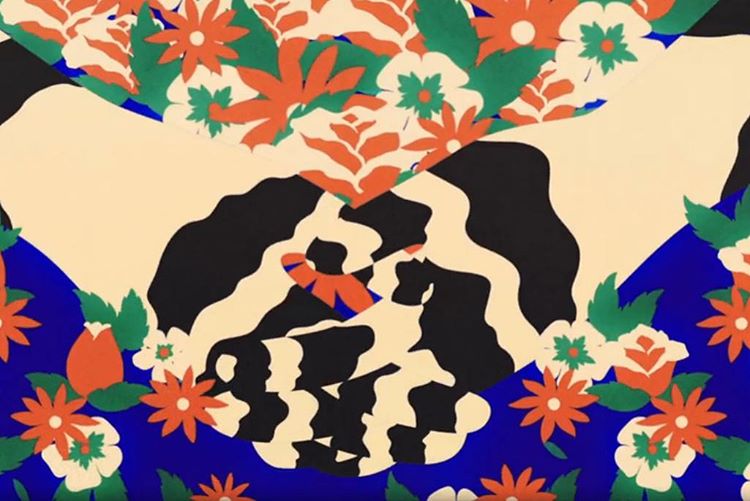 Philadelphia by way of Minneapolis four-piece Carroll has just released a psychedelic video accompaniment for track “Bad Water”. Directed by Lila Burns, the video creates a uniquely colorful and trippy universe that serves as a visual complement to the song. Weaving shapes and images perfectly match the track’s jangly guitars and woozy laid-back sound.

“Bad Water” comes off of Carroll’s self-titled debut. Released last year via Entertainment One Music, the hypnotic LP is a fusion of many influences: dream-psych, surfy reverb, post-punk echoes, and piercing vocals that meld to create Carroll’s distinct sound. This album refuses to be defined. The band delivers a magnetic exploration that is directed by musicianship and style, making Carroll as thoughtful as it is fun.

When rock bands break up, the last straw is always the same. Love, drugs, busses, airports, euphemistic “creative differences.” Clashing egos. It’s dull, it’s repetitious. The difference is what holds them together, be it for long, fruitful careers or for brief flashes of brilliance. Minneapolis-based Carroll, one of the most colorful, carefully honed acts in indie rock, are many things: young, vibrant, contemplative. But perhaps most interestingly, they’re a case study in how four distinct creative voices can coalesce into one balanced, relentlessly engaging sound.

The mechanics were simple enough: Near the end of 2011, Brian Hurlow’s demos (think melancholic, synth-based pop) caught the ear of his college classmate, Charlie Rudoy. The latter was a drummer who could bring to the songs a live, artful element. The pair quickly moved in together on St. Paul’s Carroll Avenue, tucked neatly in between Summit Hill and the Mississippi River. After some experimenting and tip-toeing through early gigs, Hurlow and Rudoy brought on board two more musicians to flesh out the live show. Max Kulicke and Charles McClung, talented artists in their own right, slid seamlessly into the line-up on guitar and bass, respectively. From there, Carroll—two Rs, two Ls, and now two Charlies—was set in motion.

An EP, Needs, was followed in quick succession by a host of accolades. The biggest radio stations and music publications in the Twin Cities lavished the band with praise; The Current, the market’s triple-A NPR affiliate, has kept them in constant rotation. Though none of the band’s four members are natives (roots sprawl to New York, Washington, Nebraska, Pennsylvania), in 2013 Carroll won the hotly contested Best New Band award from City Pages and Vita.MN, two of the region’s biggest media outlets.

Though their buzz was reaching a fever pitch, Carroll escaped to a cabin in the remote Northern wilderness. There, they recorded a handful of demos that ended up—by chance, by fate—on the desk of the renowned producer Jon Low (The War on Drugs, The National, more). Low summoned the band to Philadelphia, where they cut and mixed their self-titled debut LP in 18 marathon days. The sound could be best described as closing your eyes and submerging yourself into a bathtub of your ideal warmth–only to open your eyes and discover you’re bathing in a hazardous green liquid. Even knowing this, you can’t deny that you feel warm and coddled.

Despite the pace at which it was made, Carroll (out last September 18th via Entertainment One) is thoughtful, pointed, dense, fun, hypnotic. As for that coalescence, the band refuses to get in its own way. Carroll’s exercise in writing perfectly fucked up pop gems  yielded an LP that sounds like a pop approach to writing heady, woozy, psychedelic rock. With singles (“Bad Water,” “Alligator”) already dominating radio markets, Carroll should soon test its thesis from a much wider platform. Having opened for such disparate acts as Le1f and Dr. Dog, the four components to a singular vision are sure to find a home on dials and stages near you very soon.