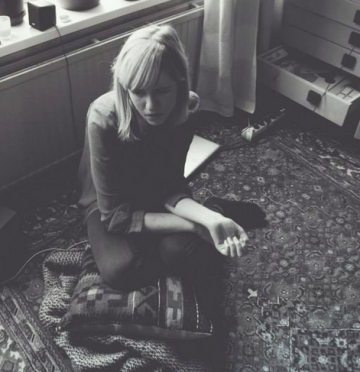 Following the announcement of her signing to Heavenly Recordings and the recent debuting of track ‘Turning Light’, Dutch Musician Amber Arcades (nee Annelotte de Graaf) has premiered another stunning track, ‘Right Now’.  The hazy, Broadcast-invoking cut is off of her upcoming debut LP, out this spring. It was recorded in New York with producer Ben Greenberg (The Men, Beach Fossils, Destruction Unit) and—along with ‘Turning Light’— is the first music shared since the release of her debut EP, Patiently, last Autumn.

Annelotte says of the new song: “The words for the chorus in ‘Right Now’ popped up in my head almost immediately and I built the rest around it associatively. Even now the precise meaning is hard for me to pin down and can shift over time, but generally I’d say it’s about the billions of different views there are to this life and whatever we’re doing here with our time and how all these differing views are probably equally true and false. I guess that’s kind of everything and nothing. And I think that might be the point.”

Amber Arcades will appear at this year’s SXSW in Austin, Texas in addition to UK dates with Palehound in March and Nada Surf in April. Details of her debut album are to be revealed soon.

* with Palehound
^ with Nada Surf