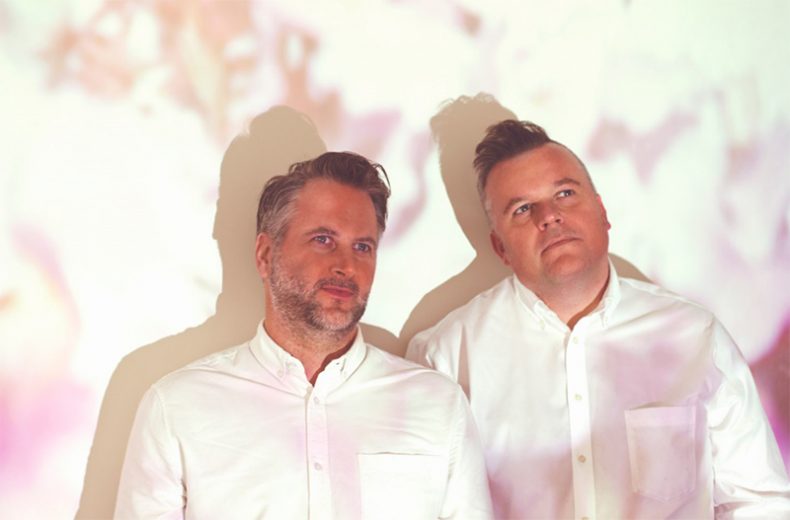 Today we have the pleasure of presenting our readers with some homegrown talent from Toronto. Laced with fantastic melodies and dreamery, indie rock duo Soft Set will be releasing their debut 7” vinyl on August 14, with A-side ‘Never Die’ and b-side ‘7 on Up’. Today we present the world premiere of the latter track.

Mixed in Oxford, UK by Ride frontman and celebrated producer Mark Gardener in his recently-launched world-class OX4 Sound Studio, These two tracks can be found on Soft Set’s forthcoming debut EP ‘Love and Dancing’. This is highly recommended material for fans of Ride, Slowdive, Pia Fraus and Dead Leaf Echo.

“Like our debut single ‘Never Die’, which was released last month, we really wanted this album to have a theme that’s relatable to everyone and we feel that our second single titled “7 on Up” does just that. We wanted the audience to think about adolescent summer nights and that longing for a first kiss, dance, or letter from their crush saying that they feel the same way as you do about them. It’s what eveyone wanted back then right? Both James and I are really proud of this track and it’s actually the first track of the album as we felt that the song really sets the tone for the rest of the EP,” says Nathan Athay.

Soft Set is a songwriting and music collaboration between James Gray and Nathan Athay, two life-long friends who became musical collaborators years after growing up together in Barrie and then Toronto, Ontario.

“Before we started this project, we agreed to never intentionally try to sound like anyone but ourselves. We really wanted to take an honest approach in the process and never discounted any ideas that we presented to each other. We gave everything a chance to see what worked and what didn’t and took it from there,” says James Gray.

“I think what makes this album so special is that it’s very relatable. The lyrics are about feelings and settings that everyone experienced in one form, or another and we feel each song is consistent with that”.

Not long after meeting during high school, they quickly realized that they had much in common, especially when it came to their taste in music. Nathan started playing drums in a local shoegaze, space rock band and James wasn’t far behind, learning guitar and writing songs of his own. Soon after, James became the band’s backup guitar player, filling in whenever the main guitar player couldn’t make a show.

Although that band lasted only a few years, James and Nathan continued to work separately on other projects, as well as working together whenever they could. Things really amped up in 2006 when James and Nathan were part of a Toronto indie rock band, recording their debut album at E5 Studios Downtown. James and Nathan learned a lot about recording and production through this process, inspiring them to continue to push themselves musically, eventually creating what is now Soft Set.

Guided by Mark Gardener / OX4 Sound and drawing on influences from iconic artists that have inspired them on their musical path – The Stone Roses, Smiths, My Bloody Valentine, RIDE, Slowdive, Happy Mondays, Boo Radleys, Mercury Rev – it’s no surprise that Soft Set’s debut EP is a body of work that is sure to appeal to a broad audience.

“This debut is incredibly special for both of us as we’re showcasing everything we’ve learned from the other projects we’ve been in in the last 20 years. We’re extremely proud of this body of work and we hope people enjoy the music as much as we did making it,” says Nathan Athay.

The limited edition 7″ vinyl run of the ‘Never Die / 7 On Up’ is out on August 14 and can be pre-ordered directly from the artist at https://softset.bandcamp.com/album/never-die-single. The full ‘Love and Dancing’ EP will be released on September 4.

Also check out the video for the band’s debut single ‘Never Die’, created and edited by Heidi Athay.