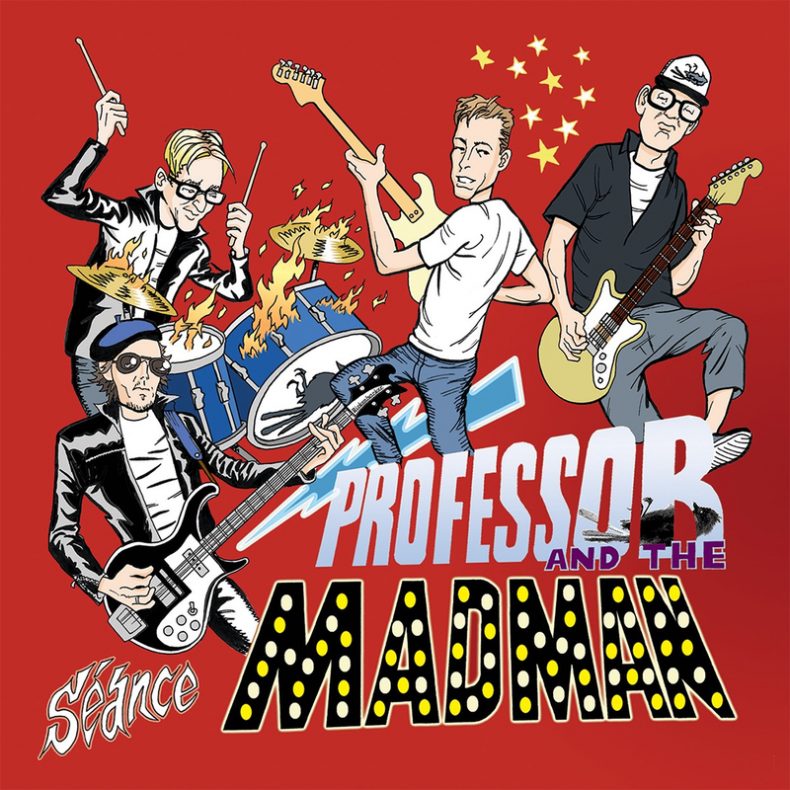 PROFESSOR AND THE MADMAN – “REAL ME”

In existence since 2015, Professor and the Madman is a rock quartet with deep roots in punk rock. The band’s lineup features co-singers/songwriters Alfie Agnew (Adolescents, D.I.) and Sean Elliott (D.I., Mind Over Four) alongside the stellar rhythm section of bassist Paul Gray (The Damned, Eddie & the Hot Rods, UFO) and drummer Rat Scabies (The Damned, The Sinclairs). PATM allows the musicians to expand outside the boundaries of punk rock, and the group’s new Séance is actually a musically diverse ‘concept album’ which takes in indie pop, hard rock, power pop, and even prog. Séance is released on yellow vinyl, CD and download on November 13 via Fullertone Records.

This song is about the duality of human nature. There is the persona that we show the outside world, as well as the person we are at home or to our close friends. “Real Me” contrasts these two sides of ourselves. Alfie and I put on many faces, and this isn’t to say that we’re insincere, it’s just a reflection of the many different roles we play at this point in our lives: entertainer, businessman, professor, husband, father, son, etc. As wonderful as it all is, when you’re that busy, you really look forward to those moments when you can completely relax and be your innermost self. Where can you do that? HOME. Home should be your sanctuary.

I came up with the lyrics while sitting on a 747 flight home after playing Professor and the Madman’s UK live debut at the 100 Club in August 2018. It was a great trip, a great show, a personal milestone. But it was also a hell of a lot of work to plan it all out and pull it off. It was months of planning, and many times it seemed as though it would get derailed — up until the last minute! Our bass player, Paul Gray from The Damned, had fallen ill, and many companies we had arrangements with had fallen through late in the game. But in the end, it happened and it was glorious!

The recording sessions for “Real Me” went without a hitch. Paul and our drummer, Rat Scabies, captured the vibe instantly. For the guitars, we were hoping to capture style tones similar to the Kinks’ Dave Davies with clean amps cranked high to get a bit of grit. We then pushed the reverb hard on the rhythm tracks, while going for some crisp, jangly tones on the main melodic theme. We grew up listening to quite a bit to these kinds of tones and tunes. It took some effort to get that authentic retro sound, but I think we succeeded.

Our new album Séance is a ‘concept album’ in the grand rock tradition of the 1970s. Believe it or not, there is a storyline that threads through and links each song. For “Real Me,” we imagined Ray Davies attending the séance at the center of the story. This is Ray’s song. If you are a Kinks fan, you know that Ray is very sentimental and reflective. That resonates greatly with us. He sung about his lost older sister multiple times. He and the boys dedicated an entire album, The Kinks Are the Village Green Preservation Society, to honoring a way of life in England that he saw quickly fading.

by SPILL NEW MUSIC on February 2, 2021
MENSA DEATHSQUAD – “FAMOUS” A SPILL EXCLUSIVE MUSIC PREMIERE “Don’t get me wrong; I don’t have some weird chip on my shoulder about famous people. I [...]