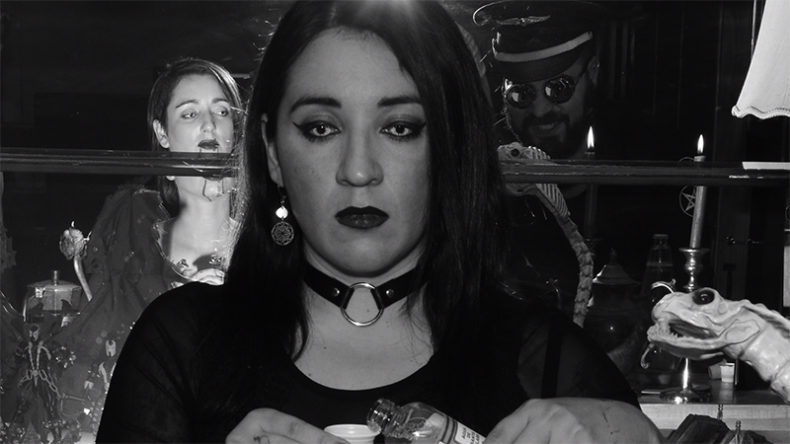 While Florida is rife and full of talent, nothing readies one for Laboratory and the almost multi-sensory experience that is listening to their music. Today at Spill we premiere their debut video for their single “Diviner,” a perfect treat for this Friday the 13th.

“Diviner” is slow, threatening, heavy and in many ways bizarre like a dream. Synths, bass, and drum machines snake around each other, while light guitar notes, theremin and vocals float over the music. Laboratory’s sound is one defined by darkness, and their performances are ominous, mysterious acts.

The video for the single was filmed at Apparatus Studios, recorded with the support of Edgar Allan Swole and directed by Eric Bandin. The videos colors reflect the mood of the music, using reds and purples aplenty.  Featuring band members Didi and Ryan in white lab coats and heavy duty rubber gloves, flames and closeups of Moog and Elektron synthesizers, the film gives the impression of being in some demented scientists lair.

Laboratory has been compared sonically to a cyber-punk soundtrack charged with Doomy, Sci-Fi, Industrial, EBM, Post-Punk, and Goth vibes. It is a visceral, pulsating motor; filled with antennas of detuned drones, tendrils of groove, all grounded by a bass drowning in melancholy. The band members regularly refer to Laboratory in a third person context, as if slaves to some electronic monster than makes them create music.

The Laboratory is currently controlling Didi Aragon, Alexandra Cordovi and Ryan Carmody as its tools to manifest its will.

The band was forced into creation in 2016, following the purchase of a “broken” theremin at a local Miami thrift store. Ryan Carmody was compelled to solder the alluring device back to life and in doing so set off a chain of events that would soon form Laboratory. Initially comprised by Didi and Ryan, Laboratory was propelled to perform at the 2016 International Noise Conference in Miami. This set was the kick off to greater things, especially with the encouragement of Rat Bastard (Godfather of INC), whom during the show famously told them: “Keep playing motherf****s, just pour something over that f*ckin flaming heart, the fire dept. is gonna come shut this shit down!”.

Having tasted life, Laboratory surged forward. The band started collecting Elektron sequencers and other equipment, gathering energy and momentum. A scattering of performances throughout 2017 served for the bands reputation to soar in South Florida, with performances known to be dark, theatrical and riveting. In late 2017 Laboratory performed with acts such as dark pop band Vowws (LA/Australia) and industrial rising stars 3Teeth (LA).

In 2018 Laboratory finally captured the intricately powerful vocal energy of Alexandra Cordovi, including her as an official member in their performances. Her addition as front person completes the trinity the Laboratory machines so greatly desired.

This latest formation has led Laboratory in a new sonic direction, still maintaining its dark industrial soundscapes, yet with more danceable rhythmic energy, attracting a new group of nihilistic revelers ready to give their souls energy in exchange for a night of revelry and dark worship.

Laboratory has an upcoming show with Soft Moon & Boy Harsher in Miami on April 25th.