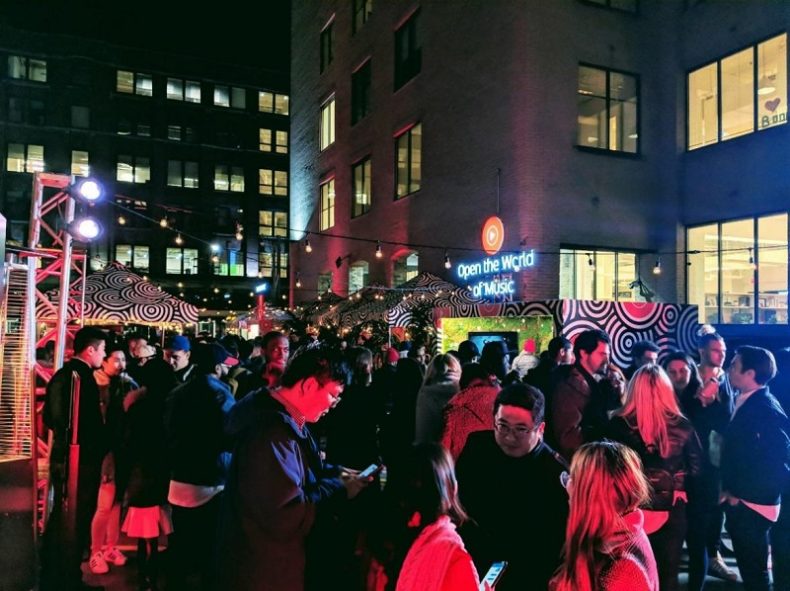 It was a cold night.

Friday nights at King & Spadina see it all. It’s the beginning of our newest narrative — every weekend we write our thesis and let the city take us in. The YouTube Music Night Market set the stage for those whose stories were well on their way, united by the music they create and the passion for their craft. Everyone was accounted for in the open-air market, as artists merged with the fans. All of us as one, staying warm (or at least trying to) under the pretense that It’s All Here. It was, it definitely was, tucked between Quantum Coffee and the Indigo Books Corporate Office. YouTube Music Night Market successfully transformed a parking lot into a festival ground.

Local vendors such as Maker Pizza, Burdock Brewery, Short and Sweet Bakeshop, and Grape Witches did an amazing job of handling the crowds, keeping everyone well fed and full of booze (speaking of my first-hand experience), while Siberia Vintage gave you the option of slipping into a costume of any character you wanted to be. Everyone was fantastic; happy to be associated with such a fun and creative event.

As the event was split into two nights, the schedules were pretty impressive considering the time frame and collective effort from the MC and the artists. Personally, I enjoyed the perspective. I spoke to a few different people from different backgrounds as this event brought people together who may never have met but have a common interest — a common bond. Perfect strangers united by the music we love. J-RICH, Money Jane, Killa Kels were expertly spinning hot tracks for friends and family, for passersby, patrons of King Street West, anyone. An outstanding performance from LU (@igobylu) split the schedule between the DJs, making for a captivating set that brought together the thinning crowd. At its peak, YouTube Music Night Market was a gathering of the masses.

Around 10:00 pm, the event climaxed, packed to the gills with listeners, curious of the lights and sounds, trading stories and plans as the weekend began. This event was for everyone. While I commend YouTube Music Night Market for the efforts of the night, the timing was a little ambitious and the advertising fell short. Besides a post from Blog TO, information regarding the night market was hidden to the general public. If this was the idea, the organizers were successful in creating an innocuous party in one of the liveliest areas of the city, however based on the thesis of discovering new artists, I would assume YouTube Music would want people to be in attendance. But who knows, it could have been less than ideal weather and the seemingly, purely aesthetic heat lamps that could only keep the crowds for so long. YouTube Music Night Market made the best out of a bad situation.

There’s no doubt in my mind that if this event was held two months earlier, there would be no complaints and a line down Spadina. Beyond the weather, the market was perfect. The sound was executed to indoor calibre, the staff was helpful, the vendors were cheerful, the crowd was excitable, and the artists were committed. From the standpoint of a fan, that’s all you can really ask for. Here’s hoping YouTube Music Night Market returns to Toronto sometime next Summer for a promising homecoming.

Originally from NJ, Nicholas is an architect residing in Toronto. His most memorable moments in music: Crying during Roger Waters set at Newport Folk Festival, Nas performing all of Illmatic at Governors Ball, and Manchester Orchestra performing Cope in a church in New Haven, Connecticut.
RELATED ARTICLES
live reviewtorontoyoutube