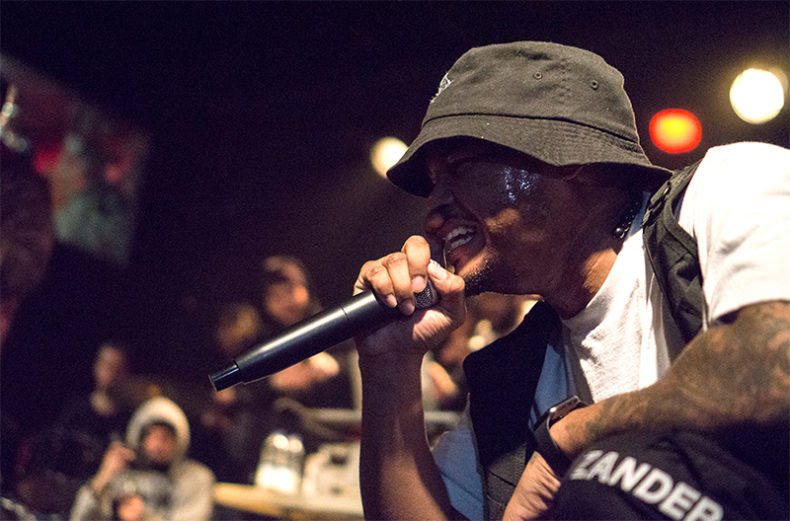 This was Xavier Wulf’s first Toronto concert in over three years. You could tell by the size of the audience and the level of energy that he needs to come a little more often. Wulf had Lee’s Palace rocking, and he looked at home up on the stage rapping to his loyal fans. From the opening song “Get High” with Idontknowjefferey to the last, “Thunder Man”, Xavier Wulf had the crowd singing along all night and was welcomed with open arms and ears by fans who have waited for what seems like an eternity to hear one of their favorite artists live. The venue was also fantastic; it was one of the best layouts I’ve ever seen, and though it was a bit grungy, the overall vibe was awesome. It has a definite underground feel, but also provides all the essentials of a great concert hall, and I will definitely look forward to seeing shows there in the future. Overall the entire night was great, from the openers all the way up to Idontknowjefferey and Xavier Wulf’s performances. Wulf made sure to keep the crowd included, even singing happy birthday to one fan at the end of the show. Throughout the show, fans were also constantly passing blunts to Wulf, who is known to enjoy them. He constantly had a huge crowd of people on stage, which looked a little chaotic at times, but he was still able to stand out. He is a great performer who looked like he loved being there, and his presence was felt by everyone. His Toronto fans could not have asked for a better reunion. Hopefully it doesn’t take him three years to come back for the next show!