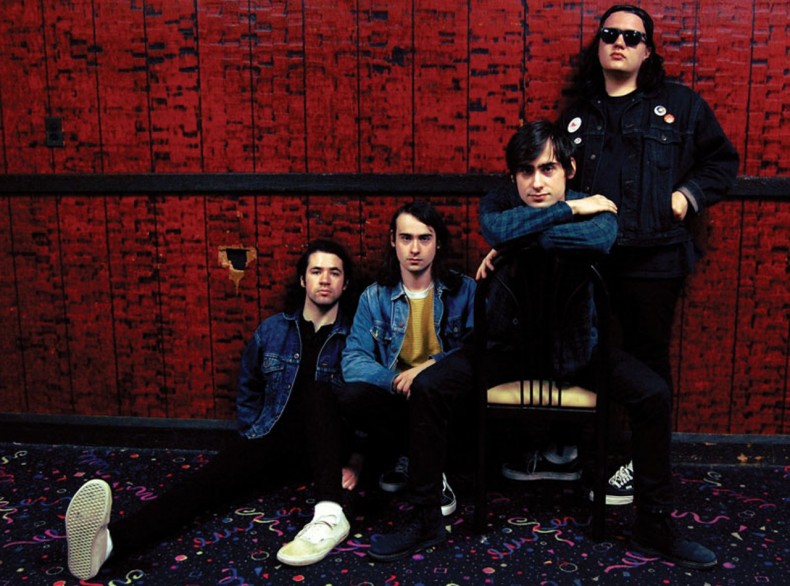 Fun Fun Fun!! That was all that was on the menu at The Smiling Buddha, when a tiny packed house had gathered to welcome White Reaper. Oh yes, and a whole bunch of poppy keyboard hooks, chainsaw guitar riffs, deafening bass and pounding drum beats. A simple recipe – punk and pop – but it offered up a delicious treat.

The four piece band, that hails from Louisville, Kentucky, are currently on a Canadian–UK tour opening for Pangea. Rhythm brothers Sam Wilkerson on bass and Nick Wilkerson on drums, Tony Esposito on lead vocals and guitar, and Ryan Hater on keyboard, will be returning in December as they have a few scheduled dates opening for Alvvays, before heading off to Europe.

With no introductions, the band hit the stage with the opening bars of “Running With The Devil”, from Van Halen’s 1978 debut album. “That wasn’t it!”, they declared, as they dove into their first song – then the roller coaster ride began. The keyboards hooks are sugary, one note tones as opposed to chords; heavy throbbing bass lines, pounding drum beats, guitar riffs that cut like a saw toothed blade. The recipe was simple, but it damn well worked.

The crowd was no stranger to the band – they knew who they had come to see, and were clearly fans. During “Last 4th Of July”, the crowd was ready after the chorus while everyone quickly clapped the beat in unison, without even a cue from the band. Later in the show, Hater toted his keyboard over to the edge of the stage, where his legs dangled amid the crowd to play, much to the audience’s delight.

Though the keyboard hooks are mere accents within the songs as opposed to weaving throughout the music, Hater keeps entertaining the audience with his antics throughout the performance, without overshadowing front man Esposito.

With no formal setlist, the band churned out tunes from their self titled debut EP, as well as their latest album, White Reaper Does It Again. “Pills” and “Last 4th Of July” were evening highlights. A sea of smiling faces, bopping heads, and dancing figures led the band through the set. No slowing down, no long dissertations between songs, they just kept on going. The show was one quick roller coaster ride, and the audience was a willing participant, hands up in the air.

Finally, by the end of the evening, the crowd had contained themselves enough and the moshing began!
Hater and Sam Wilkerson stood at the edge of the stage clapping, while the guitar ripped and the drums beats trampled.

The White Reaper came to call, and if you were an initiate, you soon discovered this was a good thing. Nothing grim, nothing sad, just a whole lot of raw fun, and catchy, rocking, badass tunes. I’ve got to admit, I for one can’t wait for The White Reaper to call again!

Trish Melanson lives in the Toronto area with her three boys, Nicholas, Justin, and Eric, her dog Jakkson, and her cats Max and Jagger. She is the former host and producer of Canadian Kickass, a weekly two hour radio show on New Jersey's Chestnut Radio, showcasing Canadian Music. She is also a former Web Content Manager of Indie Soundscapes, an online showcase for Independent Music Artists Worldwide, and was a regular music contributor to The Stroumboulopouli. She is a fervent supporter of the Toronto live music scene. In a past life she was a teacher and Vice Principal in Durham Region. She has many more new and exciting projects waiting in the wings. ;)
RELATED ARTICLES
live reviewssmiling buddhatoronto