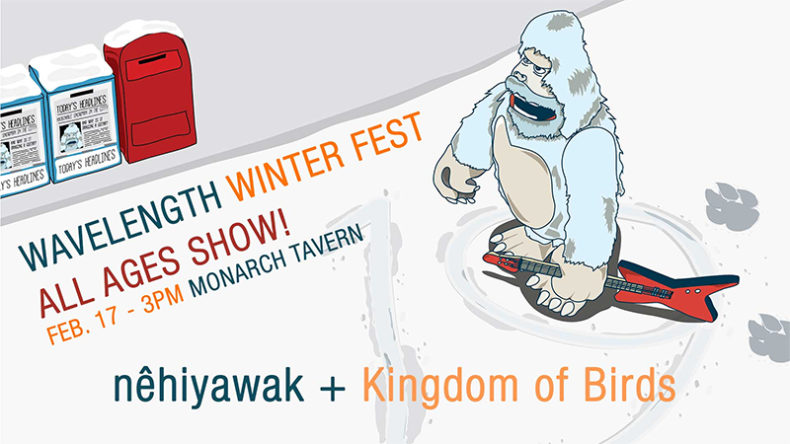 The Monarch Tavern has hosted some great independent rock bands. After braving the bitter cold, eager fans started piling into the dimly lit venue at around three o’clock in the afternoon this past Sunday.

Kingdom of Birds opened with a fast-paced indie performance. The group members’ appearances were striking; they were significantly younger than most people in the audience, which is surprising considering the sophisticated quality of their music. The lead singer’s outfit was covered in sequins and glitter, which was well-suited to their noisy and jangling sound. Kingdom of Birds wears its ‘90s and 2000s rock influences on its sleeve: “Can you see me and everything I’ve done/Rapidly strumming like I’m Broken Social Scene/But this is only a dream”, Ása Berezny sang melancholically, paying homage to the Canadian indie legends.

The indigenous space rock trio Nêhiyawak (actually a labelmate of Broken Social Scene), took the stage next. In a completely dark auditorium, they dove into some atmospheric jams, mixing the sound and culture of their Cree heritage with Western music, to create some truly unique melodies. The set often leaned toward drone, with its distorted guitars and layered synth. Although the music has a bit of a brooding aura, people in the audience were quick to start dancing, especially during songs with an exciting groove such as “Open Window”. The crowd of family, friends, and new fans could easily become a devoted cult following. Be prepared to hear more from this band.

Cory is a film maker and music lover raised in the GTA. Ever since a young age music has been a big part of Cory’s life and he often combined his love for music and film together, creating videos of him and his friends skateboarding to their favourite songs. This trend continues in his life as everything he surrounds himself with is always involved with or inspired by music.
RELATED ARTICLES
festivalfestival reviewkingdom of birds