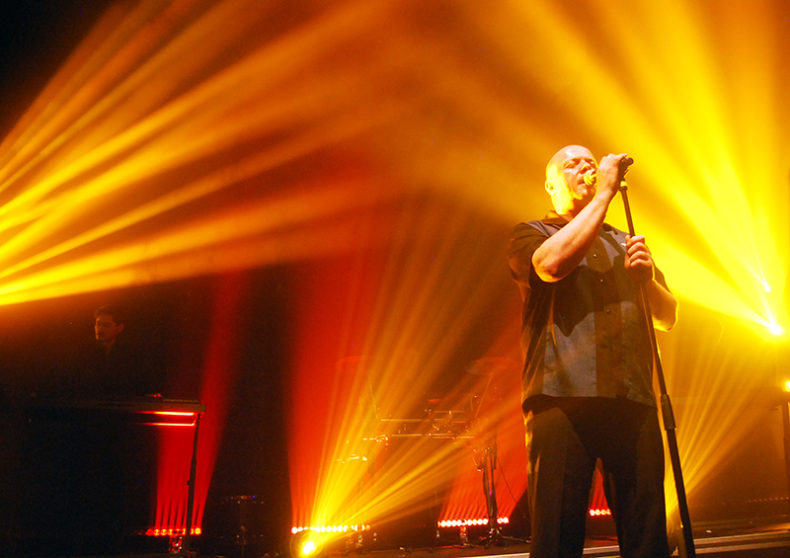 Following the release of their highly anticipated new album Noire, Hamburg, Germany-based industrial project VNV Nation fronted by Ronan Harris, took the album on the road with a brand new stage and light show as well as a new accompanying band. They made a stop at the Danforth Music Hall tonight to perform for a sold out crowd of long-term dedicated fans and brought along The Rain Within and Holygram along for the ride.

The Rain Within, fronted by Andy Deane, had the small but appreciative early crowd warm to him quickly. Deane was personable, friendly, and approachable and his quirky dance moves made him quite likable. Those who weren’t previously familiar with his work found their interests piqued for more, in particular when he performed the catchy and rather infectious “Like the Devil” and his very amusing rendition of Rhianna’s “Umbrella”. His stage antics, along with finger lasers, added to his performance value. 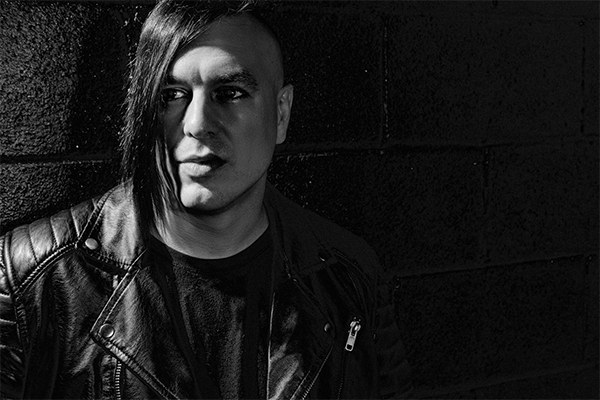 Fellow German natives Holygram delivered their brand of multilayered post-punk and new wave sounds to a modern, tech-driven live set that fans were happy to groove along to. Their dreamy and almost hypnotic music was a great lead up in anticipation of VNV Nation.

Fans who have seen VNV Nation live before know that each new stage show is a feat of light, projections, lasers, and music that create a sumptuous stage show that engages all senses, and that can only be described as truly euphoric. The stage show, paired with VNV’s signature lyrics that are often metaphorical and vaguely apocalyptic, make the whole experience rather spiritual and is often described as akin to going to church. Their latest Noire tour is a prime example. Church is now in session. 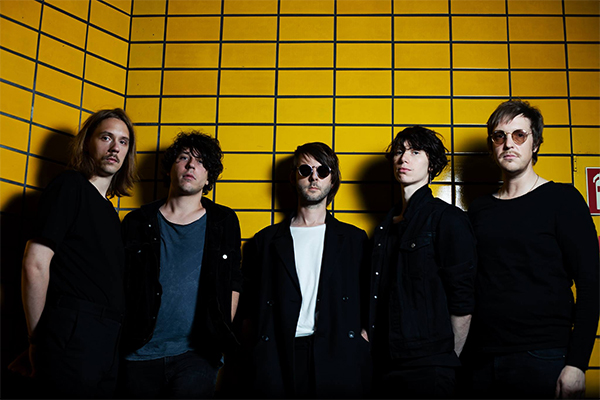 Opening the show with Harris taking center stage, arms outstretched to embrace his legion of fans before him, he launched into “A Million” off the new Noire album. Immediately, the crowd began to cheer and dance the night away.

Playing select highlights from the new album including “God of All”, “Armour”, and “When is the Future”, VNV threw in plenty of fan favourites that they’d be remiss not to play. Knowing exactly what the fans loved, they had to include “Epicentre”, “Honour”, “Sentinal”, and “Control” – one of the best call and response songs I’ve ever heard. Nothing feels more liberating than being one in a sea of people with fists in the air demanding control of the proverbial system.

At a VNV Nation show, Harris is the boss and he has a few rules for his congregation – no flash photography, and if you’re going to film, don’t block anyone else’s view. Seems simple enough but he did end up calling out members of the crowd either verbally or in gestures for breaking the rules. 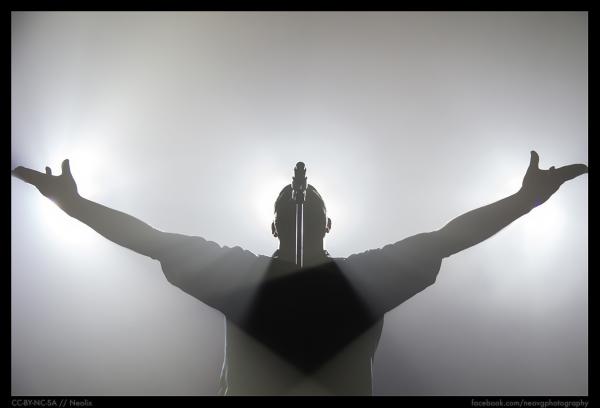 The hits kept coming paired with simply dazzling and mesmerizing stage projections. Tears were creeping out when they performed “Standing” and the crowd turned into a sea of cell phone lights during “Nova”.

The main highlight for the night was their performance of “All Our Sins” off the new album as part of their encore that featured their new stage drummer stepping out from behind his kit to accompany Harris while hammering out a powerful call-to-arms drum line.

Was VNV Nation’s show a spiritual experience? With high and intense energy throughout the night and the crowd of fans either dancing their hearts out or swaying with their arms in the air, it most certainly felt like it.

Samantha is both a writer and a fan of the arts and has been able to find numerous ways to pair the two. Eager to dive head first into writing for Spill, Samantha is an avid partaker and reviewer of live art in Toronto serving as an editor at Mooney on Theatre exploring live local theatre, she's a photojournalist for Go Globehopper, a travel, dining and tourism blog that focuses on Toronto and abroad and previously for Lithium Magazine. She's passionate about music, theatre, photography, and writing -- not necessarily in that order. She drinks tea more than coffee, prefers ciders over beers, and sings karaoke way too loudly. You can follow her on various social media including Facebook, Twitter, and Instagram.
RELATED ARTICLES
live reviewmetropolis recordsnoire