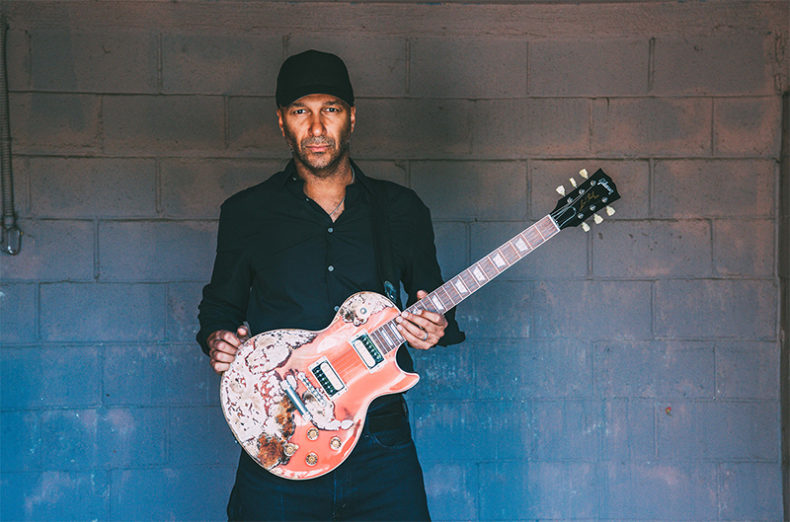 In what was perhaps the most surprisingly low key events in Toronto this weekend, Tom Morello of Rage Against The Machine, Audioslave, and Prophets Of Rage, took the stage at The Harbourfront Centre Theatre. I use the word “event” as this was not a concert. It was an evening of discussion and live music, starring Morello, and an early listen to his upcoming studio album The Atlas Underground, which drops on October 12 and features an array of guest artists including Big Boi, Killer Mike, GZA, RZA, and Gary Clark Jr. among many others.

Sporting a plain baseball hat, sharp aviators, and suspenders hanging from his jeans, Morello sat at a table, a glass of whiskey waiting for him, across from none other than Toronto’s George Stroumboulopoulos. The first half of the event consisted of a live interview between the two which saw Strombo flip through Morello’s life as if it were an biography that you just could not put down. His questions were not only entertaining, but carefully crafted to give the audience – a sold out crowd that could not have consisted of more than 300 people – an in-depth look at Morello’s life, often bringing to light stories to how some of the greatest achievements of his eclectic career came to be.

Starting from the beginning, Morello recounted his early encounter with politics – he was four years old and the only African American kid in his town – with his mother preaching the words of Malcolm X upon hearing he was being bullied at daycare. Strombo took him through how he was attracted to the guitar, his first influences being Led Zeppelin’s “Black Dog” and Kiss’ “Detroit Rock City”, his experience in bands prior to RATM, and how he introduced his friend Adam Jones to Maynard James Keenan – who would go on to form Tool. He spoke about how Michael Goldstone, head of Mom + Pop Music (the label that is releasing The Atlas Underground and who signed Mother Love Bone and RATM), suggested that Rage’s first single should be “Killing In The Name”, despite its exceeding amount of profanity, and stood by the band as they refused to be censored by MTV or the radio. He continued to discuss that in order to get the band running in America, their third single was “Freedom”, a song with zero cussing – aside from Zack de la Rocha’s off the cuff “bring that shit in” – which they snuck past the censors by saying that “shitine” was the Aztec word for freedom. He also remembered how he got director Michael Moore arrested on the set of the “Sleep Now In The Fire” music video after the band refused to stop playing on an unpermitted zone of a New York street before “taking the New York Stock Exchange” which “effectively brought capitalism to a halt on a Tuesday afternoon”. He also spoke of his time with Chris Cornell in Audioslave as he remembered his friend fondly and praised him for all that he was. 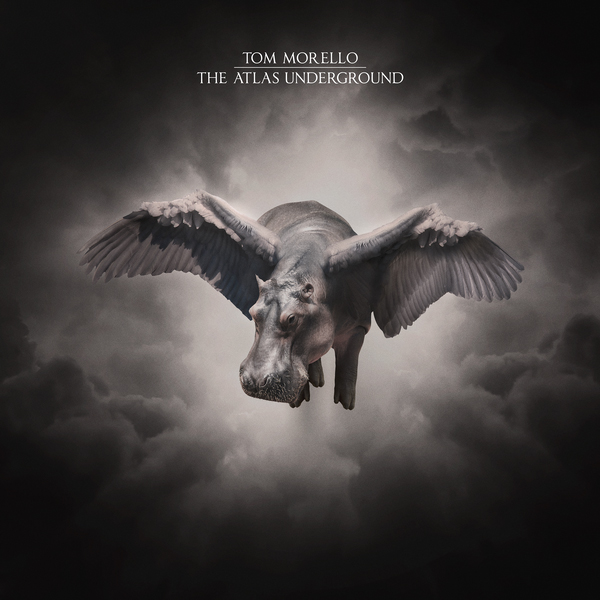 I could have listened to Morello speak all night; few artists are full of raw conviction that is backed up by knowledge, that being said, however, Morello also used this time to perform solo on the guitar. When speaking of his rigorous practice schedule, reaching a solid eight hours a day prior to forming RATM – Morello demonstrated how he used to improvise a solo over Ozzy Osbourne’s 1980 hit featuring Randy Rhodes on guitar, “Mr. Crowley”. Watching him rip a solo off the top of his head was truly an incredible experience all on his own with his performance teetering between his highly distinctive styles with that of Rhodes. He also demoed a handful of effects he used across each RATM record along with his solo from Audioslave’s “Like A Stone”. For his final performance at this time, he played an incredibly emotional “The Garden Of Gethsemane” in memory of Cornell.

The following portion of the night was a listening party for Morello’s upcoming solo album, The Atlas Underground, in full with commentary from Morello between tracks. While I won’t say much about the album here – you can read that in next week’s review – this is Morello hitting yet another creative peak as he fuses modern hip-hop, pop, and EDM elements with his signature guitar sound, with a killer cast of artists you’ve heard of and others you should have. At one point, he joked “I see the aging metalheads aren’t quite into it. It’s ok. Grow with me”. He’s right. While I truly enjoyed it, this is a record you’ll either love or hate. Regardless, you cannot deny the sonic innovation and prolific social context of Morello and The Atlas Underground.

“Now the album is done, but the party has just begun” Morello exclaimed as he picked up his notorious “Arm The Homeless” guitar. He dove straight into Bruce Springsteen’s “The Ghost Of Tom Joad”. Morello sang and played guitar whilst being backed by a remixed version of the song which sampled Springsteen’s vocals overtop electronic beats, furthermore concluded with yet another jaw dropping solo where he lifted his guitar to play with his teeth, revealing a “Fuck Kavanaugh” sign. For his final song, he invited everyone to the stage. With nearly the entire audience circled around him on stage and crowded within the first few rows, Morello exclaimed “this song doesn’t belong to me, it doesn’t belong to Rage Against The Machine, it belongs to you, it belongs to everybody” before diving into “Killing In The Name”. Morello played the track note for note while the auditorium exploded by the audience led vocals. Singing the infamous “fuck you I won’t do what you tell me” within reach of Morello in such an intimate setting is definitely among the most empowering and liberating experiences one can find.

While not the full concert experience I was expecting – honestly, I wasn’t sure what to expect when I eagerly bought my ticket – Morello delivered a night that no one in attendance will ever forget. This was an unprecedented night that surpassed any and every expectation that will long be remembered as the night Tom Morello quietly took over Toronto with a night of laughs, hard truths, and the kind of music that inspires you to kick down the doors of oppression and to take the power back.

A passion for music has always been a part of Gerrod’s life. As a young boy, he was raised on a steady diet of the music from The Chili Peppers, Aerosmith, The Stones, Prince, and others from his mum. Raised in the GTA, Gerrod continued to foster his love for music by attending a wide range of concerts and learning the drums. His unapologetic passion for music has no bounds and has spread to a wide variety of styles, whether it be the 90’s rock that sound tracked his teenage years, the jazz he studied in university, or his newfound love for hip-hop. He recently received his bachelors in music and education from York University and is passionate about writing and reviewing good (and less than good) music. Gerrod is also the drummer and songwriter for a Toronto based rock & roll band, One In The Chamber.
RELATED ARTICLES
live reviewtom morellotoronto