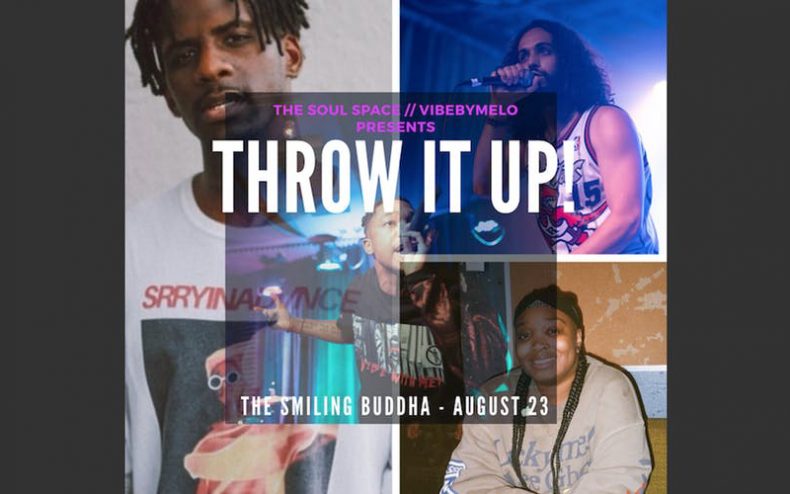 Toronto’s Smiling Buddha was overflowing with excitement tonight as it hosted Throw It Up, a nonprofit event created by The Soul Space and Vibebymelo in support of UPlayCanada Girls Basketball.The show is also an exhibition of some of the city’s rising talent.

DijahSB was the first to take the stage with her no-nonsense approach. She played some really catchy songs from her latest album, Rap Till I’m Rich, such as “Run My Money” and “No Smoke”. The Toronto native teased the crowd with “I Wonder”, a song that pays tribute to Kanye West’s track of the same name, and the audience broke out in a frenzy.

“I’m in the fast lane I got a different tank/
I’m on a different high I’m hitting different licks/
Ignore the bad vibes ignore the ignorance/
You need more drugs well I need less of it/
Trynapush my buttons while I get Benjamins.”

Rapping matter-of-factly, by the time she left the stage the room’s energy level had gone up ten notches. DijahSB is one of the most serious hip hop artists coming out of Toronto. Period.

Next was Haf n’ haf, a rapper from the west end  who stands out for his Golden age hip hop aesthetic and oddball lyrics. His smoked out, imaginative bars sound like they were cooked up late at night while watching cartoons.

he spits on the track “Super Mutable”. Halfway through his set he brought out rapper Lincoln Woods and they performed songs off of their collaborative album Haf Pack of Woods. The chemistry between the two rappers is unquestionable, you can tell they feed off of each other’s love of the boom bap sound. Any enthusiast of dusty underground hip hop will vibe instantly to these two.

The crowd summoned Vibebymelo to the stage by chanting his name. He was dressed in a vest designed by local designer Briq, and performed songs off his latest release Project: M. He jumped around the stage energetically, and had the crowd wrapped around his little finger. They loved every minute of it. His music mixes trap aesthetics with traditional hip hop.The rapper’s charismatic personality lets him rap over anything without losing the listener’s attention. A great example of this versatility is on the song “Ride” where the instrumental track changes from hazy trap to breakbeat inspired. Simply put, this guy’s really lit.

Patrik had only been in the city for five hours when he went onstage, and he would be headed back to Montreal soon afterwards. Raised in Toronto, the buzzing artist moved away, looking to differentiate himself and find inspiration in another place. His latest EP, Spadina, was born out of missing his hometown.

he reminisces comfortably on the song “Spadina Ave”. Whether he’s talking about criminal activity or the modern social media climate, you can always count on there being a conscious message to the rapper’s music.

he boasts on the song “Diamonds”. Patrik strays from the popular trap sound of today’s hip hop, and instead focuses on the sounds, places, and stories that shaped him into the artist he is today. He’s an authentic new voice to look out for.

If you’re a fan of underground hip hop or are looking to support new artists coming out of Toronto, stay tuned for more events promoted by The Soul Space and be sure to stream all of the artists mentioned above.

Cory is a film maker and music lover raised in the GTA. Ever since a young age music has been a big part of Cory’s life and he often combined his love for music and film together, creating videos of him and his friends skateboarding to their favourite songs. This trend continues in his life as everything he surrounds himself with is always involved with or inspired by music.
RELATED ARTICLES
live reviewpatriksmiling buddha