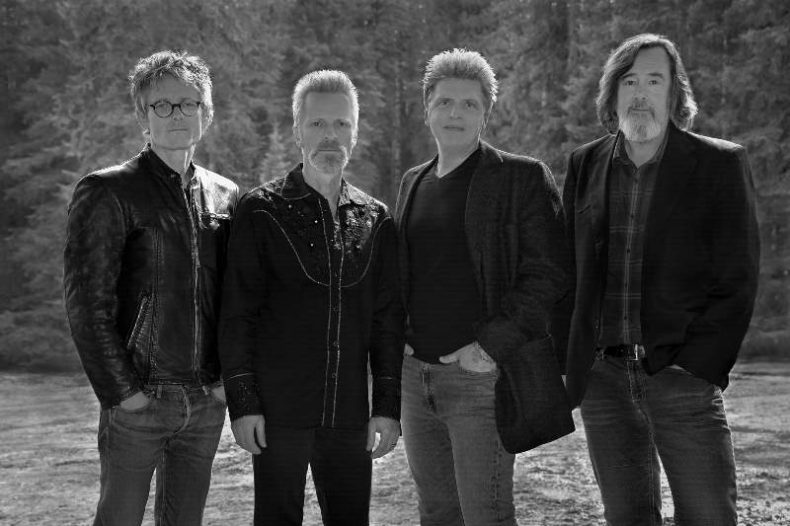 It was a very special evening with The Northern Pikes, playing their first gig with new material since 2003. 16 years have gone by and it seems like a day since their last album, It’s A Good Life. Much has changed since then, including the retirement of longtime member Merl Bryck, and the inclusion of Kevin Kane (also of The Grapes Of Wrath) as an official member of the band.

Excitement was in the air at White Rock’s intimate Blue Frog Studios, where Kane joined Jay Semko, Bryan Potvin and Don Schmid for the first of two shows on this night. The Northern Pikes chose Blue Frog Studios to be the release location for the very well-received new album, Forest Of Love. The seating was limited to 100 persons in this recording studio/live music venue which helped to make every seat a premium location, close to the action.

The members of The Northern Pikes are all veterans as live music performers, which brought upon a seemingly effortless air, as the foursome strolled onto the stage and immediately launched into the first new single, “King In His Castle”. Semko’s smooth vocals permeated the room with the familiar sweet baritone from the principal singer in the band. The live performance of this banging new tune was crafted in such perfect detail that the similarity between this and the recorded version were nearly identical, except with that special extra nuance that a live performance can give, when a band is on their game, as was the case throughout the night.

Next was the second track from Forest Of Love, titled “Canada Boy”, sung delightfully by newest member, Kane. An organic blend of The Northern Pikes and The Grapes Of Wrath was on display which added another special aspect to the live performance and to the new alum, Forest Of Love.

As one expects from a band with such a lengthy and desirable resume as The Northern Pikes, they began to dive into their playlist with “Hopes Go Astray” and “Wait For Me”, both from their excellent 1988 album, Secrets Of The Alibi. The sound of these classics was absolute perfection along with the great acoustics from Blue Frog Studios.

Semko recognized the audience’s keen appreciation to both the old and the new with a most Canadian “Thank you very kindly” in response to the adoration from the crowd. Throughout the night, all four members of the band interacted with the audience and helped to break down any walls that may exist between performer and audience.

Next, Potvin belted out the catchy “Faith Of A Fool”, another new offering from Forest Of Love. Potvin’s enthusiasm was contagious and made this upbeat song with a sobering message a lot of fun.

The Northern Pikes continued with a nicely delivered blend of their many hits, including “Kiss Me You Fool”, “Snow In June”, “Teenland”, “Things I Do For Money” (with Schmid breaking out the glowing green drum sticks), and “Girl With A Problem”. In addition, two hit singles from The Grapes Of Wrath were drawn from the deck by Kane with “All The Things I Wasn’t” and “Peace Of Mind”.

The band played two more new songs from Forest Of Love, the lovely, acoustic “Don’t You Give Up”, which was broken into three parts equally being sung by all three singers, which made the song extra special. Finally, the self-titled, groovy, “Forest Of Love”, sung by Semko, which was also mixed in nicely with the above well-known fan favourites.

The end of the night was capped off with the band’s biggest hit, “She Ain’t Pretty”, from 1990’s Snow In June. Midway, Potvin launched into an extended version, integrating Cheap Trick’s 1977 hit “I Want You To Want Me” into the song. It helped give the song an extra injection of rock ’n’ roll, but wasn’t necessarily needed as their classic stands well on its own.

The Northern Pikes truly had the crowd in the palm of their hands, playing 15 immaculate songs in their first concert promoting a new album in 16 years. It was a truly magical and memorable night, topped off by all four band-members hanging out in the lobby, ensuring nobody was left unhappy by signing autographs and chatting with fans, just before they prepared for their second show of the night, which was live-streamed world-wide by Blue Frog Studios.

John Graham is a Vancouver-area resident who typically spends most days admiring music of all genres. When not listening to music, John is usually at a live show, somewhere in the bowels of Vancouver.
RELATED ARTICLES
british columbialive reviewthe northern pikes

by SPILL NEWS on April 8, 2017
18th ANNUAL MOTION NOTION FESTIVAL UNVEILS DYNAMIC, FULL-LENGTH 2016 AFTER MOVIE For one weekend each year, the spellbinding forest surrounding the [...]