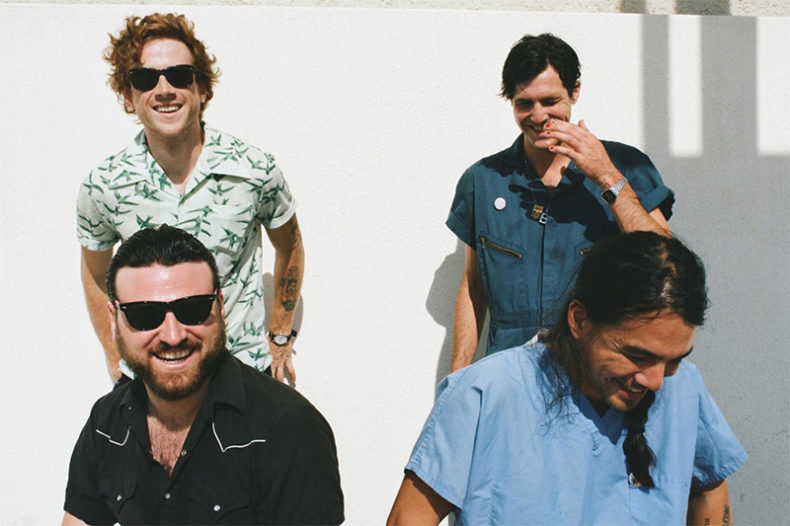 Dboy took the stage in bondage masks for a blistering, performative punk rock set, complete with fake Balkan accents and a glorious piece of band propaganda behind them. The band is very serious about being a trio, to the point where one of their songs features the refrain “three-piece band” in the chorus, but they inexplicably had two masked members stand on stage without instruments at all. Dboy is as kitschy as they are Khrushchev, but they are also damn fun.

Sam Coffey and the Iron Lungs came out as six rock ‘n’ roll Santas and unwrapped some raucous riffs. Members pulled off articles of the Santa suits with each song, revealing more traditional rock attire underneath. It turns out that Coffey himself was wearing another cape beneath his furry red one. This a deliberate and hardworking act onstage and off, the band even donated several hundred socks to the Socks4Souls charity which the show was supporting. 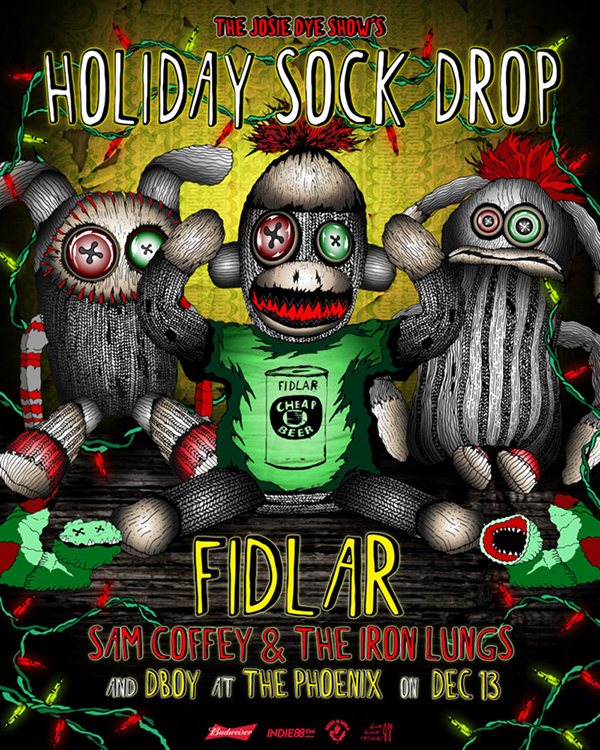 MAKE A DONATION TO SOCKS4SOULS TODAY

With their name scrawled in thin red letters behind them, FIDLAR took the stage without fanfare. Bassist Brandon Schwartzel was the only Santa of the set, and his energetic antics played well against vocalist Zac Carper’s more traditional punk Dune Rats t-shirt and half-braided hair. The set opened fast with new single ‘Alcohol’ and the surfy skate-punk favorite ‘No Waves.’ They played fast and loud with few breaks, plugging in some old favorites before previewing new tracks from the forthcoming Almost Free, which drops in early 2019. The band droned and swelled to build up the the sharply political new track ‘Too Real,’ after which Cooper broke up the set to address the audience and get them to open up a girls-only mosh pit, suggesting they “find the first fuckboy they see and fuck him up.” The eager pit was greeted with the swift new single ‘Can’t You See,’ the first FIDLAR track to see guitarist Evlis Kuehn and Zac Carper trading lead vocals atop a bold staccato guitar line. The band closed with the alcohol anthem ‘Cheap Bear’ before a rowdy encore of the loudly requested ‘Cocaine.’ It was a one-song encore, but it featured some of the most vigorous crowd surfing of the night, including someone singing and surfing from a wheelchair.

As a music industry professional, Liam has seen all sides of the industry. Working as a venue and operations manager for the Calgary Folk Music Festival, specifically their stunning black box concert hall Festival Hall, he has put on countless concerts and music events. In the evenings you'll find him writing bios and copy for artists as well as shooting promotional and live still photos for bands and presenters. You might even see him brewing up his own introspective and self conscious anti-folk in Calgary's DIY music seen as well. His palpable musical network and knowledge of every facet of live music production make him an invaluable resource. He is currently at the Canada's Music Incubator Artist Manager Program in Toronto. (Photo Credit: Michael Grondin Photography)
RELATED ARTICLES
almost freecan't you seefidlar
8.0