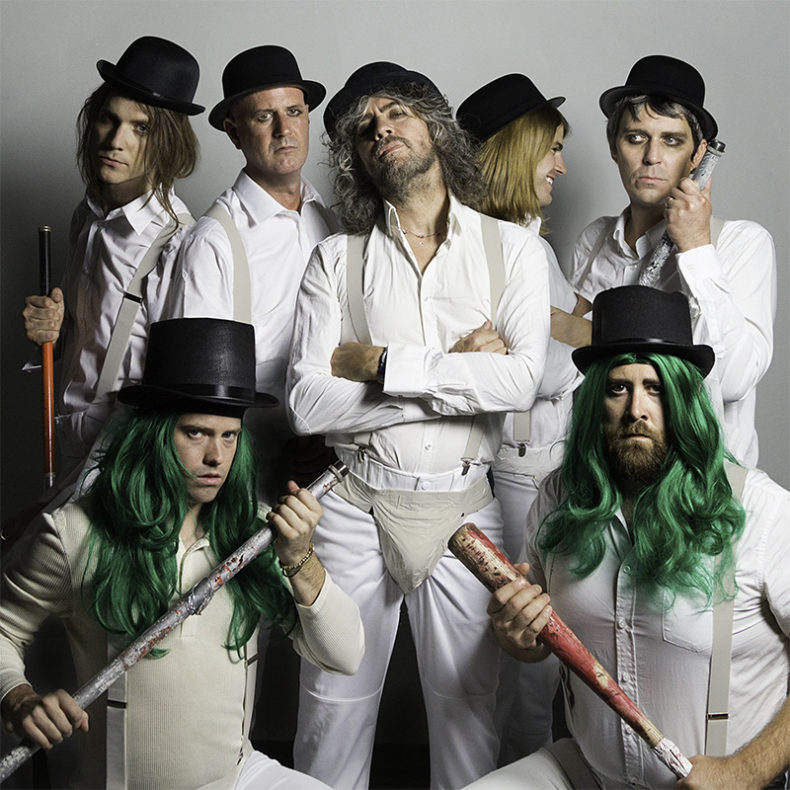 Fishnet stockings, ritualistic chanting, and the choreography of a possessed satanic worshipper are one way of capturing a crowd’s attention. With every eye in the theatre locked on their every movement, Le Butcherettes crafted a transcendental atmosphere that pushed the boundaries within their music, and in terms of the sheer eccentricity their audience could tolerate. Shifting through layered synth sections, David Gilmour-inspired guitar squeals and jarringly thick bass lines, this is how Le Butcherettes set the stage in Montreal this past Monday.

Only a band like the Flaming Lips could relegate such an experience to relative mundanity, though lead singer Wayne Coyne was thoroughly enjoying the opening act from the side of the stage himself. He and his team of musical cosmonauts have long established a reputation for their live performances, both in terms of their excellent musicianship and the overwhelming chaos that they so reliably conjure. If there was any concern in the crowd that the Flaming Lips had toned things down over the years, then the seemingly endless explosion of confetti, seizure-inducing visuals and giant ‘Fuck Yeah Montreal’ balloon that accompanied set opener “Race for the Prize” (after an electronica laced cover of Richard Strauss’ “Also Sprach Zarathustra, Op. 30”) would have assuaged those worries without much fuss.

Coming out with all guns blazing in such a fashion can often make it difficult to carry the momentum throughout the rest of the show. Fortunately for those lucky souls at Metropolis (the name of Montreal’s leading theatre for live shows before it was so tastelessly rechristened for sponsorship reasons), the show was just getting started.

Three layers of LED screens and veils on top, in front of, and behind the band blasted enough mind-melting visuals towards the crowd to induce at least a few LSD flashbacks. Those able to hold onto their mind were able to enjoy Coyne’s zany antics, which ranged from charging through the crowd on an illuminated unicorn and gleefully dancing with a giant inflatable pink robot, to being jettisoned around the venue in a giant bubble. All the while the band emanated an irresistibly contagious positivity, with rainbows, lollipops and (obviously) more unicorns fittingly appearing throughout the show.

The cherry on top of this surreal circus, despite being the foundation of the whole spectacle, was the excellence with which the Flaming Lips perform their music in a live setting. Older tracks like “A Spoonful Weighs a Ton” were played with as much enthusiasm as they were 20 years ago, while new additions to the band’s repertoire like “How??” felt like they’d been regular setlist staples for years. Lush ambient noises floated underneath Coyne’s caressing vocals while stringed instruments built a wall of sound on top of the grooves produced by the band’s two live drummers. The clarity with which the Flaming Lips served this delicious feast of sound meant that not a note was left unheard. So confident were the Oklahoma natives both in themselves and the energy they’d shared with the Montreal crowd (who had been doing their very best to deafen the band with their screaming) that they performed “Oczy Mlody” live for the first time.

After a 35-year career thus far, the Flaming Lips play like a band that has been guzzling from the fountain of youth. With their songwriting doing better with age than even the finest French wine, and a seemingly endless well of energy to tap into, these psychedelic craftsmen are as capable of spreading intoxicatingly good vibes and touching messages of love and reassurance as they ever were.

Based in Montreal but raised across Western Europe, Andrew feels at home both everywhere and nowhere. Having picked up the piano at age four, he has since gone on to add clarinet, saxophone and guitar to his musical arsenal. As well as crafting music, Andrew spends a lot of time listening both at home and in live contexts. Rather than focusing on a particular style or calibre of artist, he is keen to explore music of any shape or size. Outside music, Andrew's passions lie in philosophical writing, visual art and sharing positivity with the world around him.
RELATED ARTICLES
live reviewmetropolismontreal