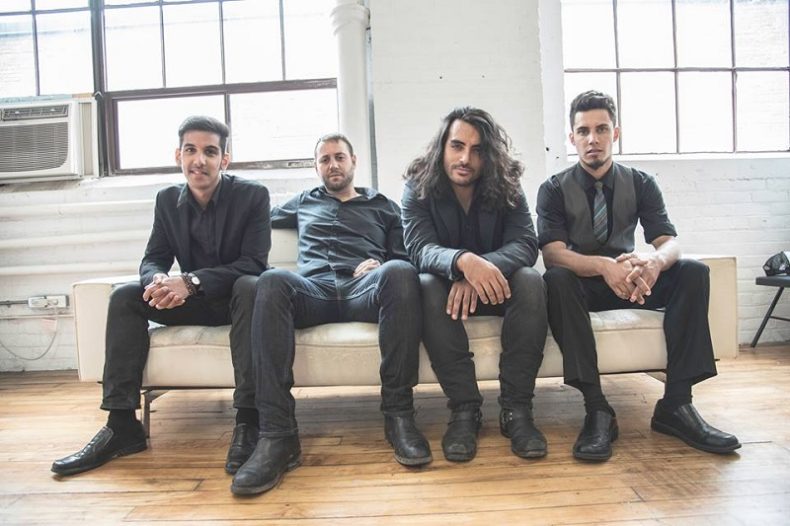 To mark the release of their brand new EP, First Place Silver, The Crooked put on a celebratory show tonight, almost a year and a half since playing their first gig together at Lee’s Palace. This time, the party was held at Toronto’s Legendary Horseshoe Tavern, “with its checkerboard floors”, and what a party it was.

The Crooked is J.C. Sandoval (Die Mannequin/Secret Broadcast/Savanah) on lead vocals and guitar, Anthony Dell’Orso (The Joy Arson) on drums, Neelesh V. on lead guitar, and Russ Shipman (The Darkstone Crows) on bass. The band is tight – a set of four highly skilled musicians, their energy and timing is impressive. Sandoval’s vocals are powerful and in key, the guitars are crisp, and the bass and drums are the perfect backdrop with sophisticated, hard-driving beats. The energy level was through the roof, and the spectators felt it too.

The band kicked off the night with “Empathy”, opening the tune with a variation from the recorded version, this time with a beautiful, melancholic guitar intro. They wasted no time turning up the heat however, and the song quickly turned into a fire-breathing dragon. The heat didn’t let up until the night was done. Blistering guitar solos and pounding drum beats abounded, as they followed up with “Glove” and “I Didn’t Know”. After a toast to the audience by Shipman, “Dog Days”, the lead single off of First Place Silver was introduced. Part way through the tune, the band jumped into a cover of “Black Sabbath”, eliciting cheers from the audience. “Luxury Prison” was up next, followed by “Watch Me Burn”, a blistering, high energy number that comes off as energetic live as it does on the album. Nirvana’s “Heart-Shaped Box” followed, once again causing loud cheers from the audience. Wrapping up the evening, the band burst into “Tarot Cards”, clearly a hit with the audience.

In spite of some early tech difficulties, The Crooked put on a exciting performance. “This is the first time we have played in a while”, declared Sandoval at the end of night. Being in the audience, one would never have guessed. It was great to see that the energy level present on the album is surpassed when the songs are performed live, which is not always the case. Tonight, the audience watched them burn, but luckily this flame that will only burn brighter. Tonight’s show was an exciting kick off to what is sure to be an exciting tour. This is a party you do not want to miss.

Trish Melanson lives in the Toronto area with her three boys, Nicholas, Justin, and Eric, her dog Jakkson, and her cats Max and Jagger. She is the former host and producer of Canadian Kickass, a weekly two hour radio show on New Jersey's Chestnut Radio, showcasing Canadian Music. She is also a former Web Content Manager of Indie Soundscapes, an online showcase for Independent Music Artists Worldwide, and was a regular music contributor to The Stroumboulopouli. She is a fervent supporter of the Toronto live music scene. In a past life she was a teacher and Vice Principal in Durham Region. She has many more new and exciting projects waiting in the wings. ;)
RELATED ARTICLES
first place silverlive reviewthe crooked
8.0