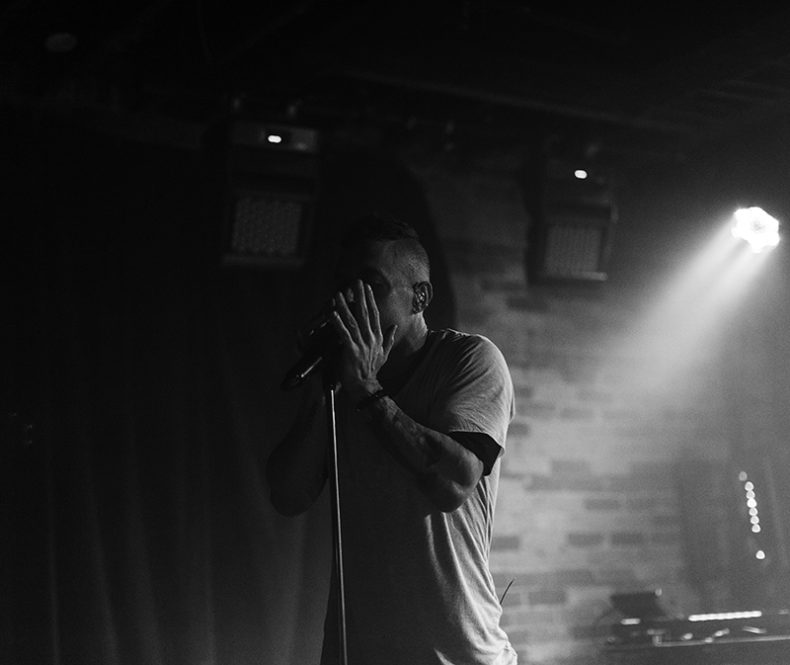 Frontman Greg Puciato has been keeping himself busy since The Dillinger Escape Plan decided to call it a day. Even though Dillinger fans will miss the chaos, there’s plenty to be excited about with The Black Queen especially after the release of “Infinite games” last year. The chemistry seems to really have improved and Puciato’s vocal melodies are catchier than ever.

The Black Queen are now touring in support of “Infinite Games” and tonight the band played at The Velvet Underground in Toronto and brought SRSQ and Uniform along with them. SRSQ opened up the show and warmed up the crowd with dreamy pop and hypnotizing vocals. Uniform brought their vicious industrial sound to the stage next and verbally assaulted the crowd for 45 minutes. Vocalist Michael Berden grips the microphone and squeezes the life out of it while he delivers his lyrics with a piercing yell. Guitarist Ben Greenberg and drummer Greg Fox play off each other so well and deliver such a huge sound for a 3 piece.

The Black Queen was up next and played their first song in dramatic fashion. The stage was lit just enough to make out the silhouettes of each member until they went into the first chorus. The lights then came up and the crowd went crazy. Everyone was immediately drawn to Puciato and his commanding stage presence. He has a way of really connecting with a crowd and you could really feel it throughout the show. They really bring new energy to these songs in a live setting especially on tracks like “Thrown Into The Dark.” Puciato would kneel down at the back of the stage and really let the intro build and just explode with energy on the chorus. He truly is one of the most energetic frontmen out there.

Justin McGrath is one of the most entertaining keyboard players I’ve ever seen. He was constantly tipping them over and manipulating them in ways I’ve never seen before. He would also stand on an amp and play them from above.

After a lengthy and satisfying set, Puciato proceeded to express his love and appreciation for Toronto and the support he’s gotten from the city over the years by going into the crowd and hugging a bunch of audience members. It was a gesture that I haven’t really seen before but just shows you how passionate he is.

Where would I be without music? Somewhere I don’t want to be. Loves photography, skateboarding, stand-up comedy and Gaspar Noe movies. Full time student.
RELATED ARTICLES
live reviewsrsqtoronto