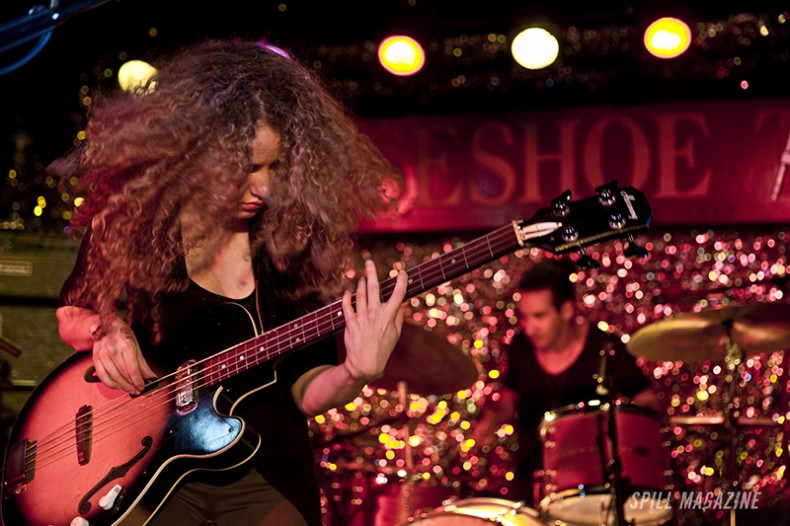 It’s a fucking cold night, and my eyebrows still hurt from waiting in line outside. I eavesdrop on conversations about boutique sound systems, bass playing techniques and gourmet cooking. This is a night for music nerds, no doubt about that.

The Horseshoe is one of the few clubs that truly deserves its “legendary” status. Always a great vibe, the doors are run well and the bartenders do their job efficiently. Sold out shows are packed, but you can almost always sneak up and get a good view of the stage. The sound system is loud and a little too muddy on the bass.

As the room fills up, Jerry Leger’s voice travels across the crowd inconspicuously. He is Wilkenfeld’s opener for the night, and at first has the impact equivalent to elevator music. As time plods along and the crowd gets thicker, Leger starts to draw more attention. With some nice hooky lyrics and crowd interaction Leger manages to win over a portion of the crowd. With a good foothold on the Toronto folk music scene and an impressive musical catalogue it’s not his fault he’s being partially ignored… Everyone is here to see Tal.

Wilkenfeld hits the stage dressed in black with her big blue bass swung over her shoulder, and the band immediately bursts in to the first song. The drum groove is potent, the guitar dirty and the bassline is all rock. Song one, “Killing me,” is decidedly post-grunge and a huge departure from her first album Serendipity, which was very much instrumental jazz-rock. For someone who has garnered accolades touring with Jeff Beck, Eric Clapton and Chick Corea, it might not be what the crowd was expecting but it certainly was a nice surprise for me.

Wilkenfeld’s voice is not what I expected to hear from a young jazz-bass prodigy; it’s really good. She has great projection and expression, endurance and vibrato. Not unlike her bass playing I suppose. Wilkenfeld really tells a story and engages her audience. Her songs are often about love, loss, and loneliness, something a longtime touring musician knows all about. The power of her songs were somewhat wasted on her audience, who stood listlessly and only applauded where they should. I kept waiting for the moshing to start… it never did. It will be interesting to see the reaction if/when she starts touring with more modern rock acts.

Now all this distorted rock business doesn’t mean the band didn’t have its wanking solo moments, and in those moments Wilkenfeld did not disappoint. That’s what the people were there to see: Tal playing the bass. Comically, she actually apologized for having to pick up guitar on a few songs, because “that’s the way she wrote them.” No apology necessary, the acoustic guitar work was percussive and melodic and decidedly Tal Wlkenfeld. It sounded great. She now has a catalogue of songs that are her own, brand new and currently unreleased. I am looking forward to hearing the record, and seeing if her new musical direction will propel her even further into the spotlight.
Wilkenfeld seems a very humble soul, and this really comes out in her cover of Leonard Cohen’s “Chelsea Hotel.” If you get the chance look it up on YouTube, do so. It’s a great emotional piece and her bass arrangement is spectacular. The band also did a great version of The Smiths’ “How Soon Is Now?” with a smoking bass and drum solo in the middle. Very satisfying.

New songs like “Hard to be Alone,” “Standing in the Rain” and “Painted Yourself in a Corner” are more aggressive than anything Wilkenfeld has done before, and her forlorn lost-at-sea voice juxtaposes nicely overtop the thick rock groove. She seems to have something to say, and I want to hear more. With her heart-melting smile and undeniable passion for groove she really deserves a wider audience. If you get the chance, go see her. Whether she’s chopping jazz heads with Herbie Hancock or dishing out her own brand of modern rock one thing is for sure: “Tal” must be short-form for “Talent.”

James Stefanuk has an unbridled passion for good original music. He has been involved in the Toronto Indie scene for over a decade, and currently fronts the Alt-Blues band 'Jim Dan Dee'. In his spare time James plays with his Australian Shepherd 'Indie', drinks bourbon on the rocks and writes about himself in the third person.
RELATED ARTICLES
jerry legerlive reviewthe horseshoe tavern

SPILL NEWS: JERRY LEGER BRINGS NEW ALBUM TO THE DAKOTA TAVERN FOR FINAL SHOW OF THE YEAR ON DECEMBER 22

by SPILL NEWS on November 27, 2017
JERRY LEGER BRINGS NEW ALBUM TO THE DAKOTA TAVERN FOR FINAL SHOW OF THE YEAR ON DECEMBER 22 DOUBLE-ALBUM NONSENSE AND HEARTACHE OUT NOW VIA LATENT [...]