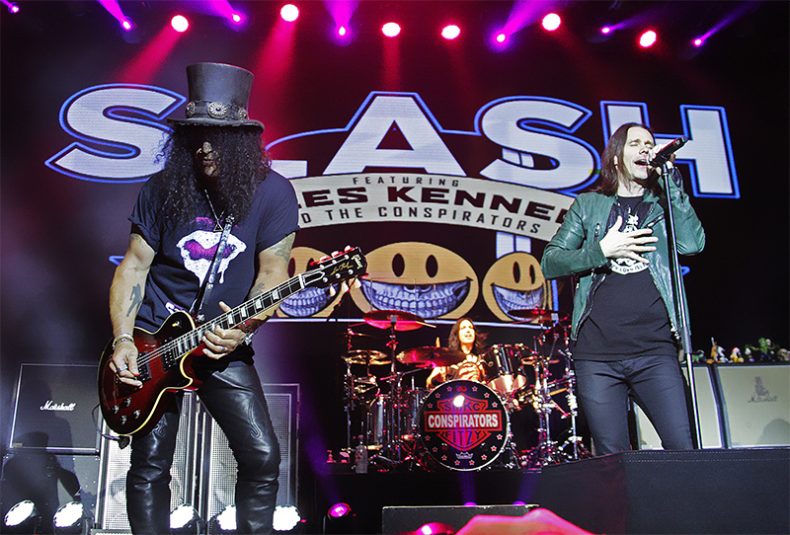 It’s not every day that a legendary guitar hero rolls into town on tour with a hot band, and when the word was out that Slash Featuring Myles Kennedy and the Conspirators was heading to Toronto, I felt it an absolute MUST to check it out.

When thinking back to the debauchery, fast living and sleazy lifestyle that Slash endured in the ‘80s and early ‘90s, you can visualise a larger than life rockstar who may have barely held himself together for a live set during the G N’R’ days. Things have clearly changed for the better over the past 30 years and as expected, this show was nothing less than perfection, executed by top notch pros at the height of their game. Slash Featuring Myles Kennedy and the Conspirators take their craft seriously and deliver two hours of some of the best unrelenting powerhouse rock’n’ roll in the business.

Kicking the set off with “Call Of The Wild”, Slash and the gang got the crowd at Rebel moving fast and hard. Myles Kennedy came out in perfect form making his job look easy and belting out pitch perfect vocals. Slash gave the crowd what they came for right off the hop with his stunning chops and larger than life stage persona. Following up with heavy hitting tunes like “Halo” and “Standing InThe Sun”, the band had the place on lockdown and were just getting warmed up. From song to song Myles had the crowd in the palm of his hands with a very laid-back technique of genuinely connecting with the crowd.

Slash absolutely delivered on his shredding promises and flew into a raging 10-minute guitar solo during the song “Wicked Stone”. The virtuoso L.A. guitarist blew the roof open showcasing what he’s made of using a slew of classic Slash guitar effects, wah pedal and blowing the crowd away with his giant wall of sound.

The two-hour set consisted predominantly of Slash’s repertoire mixed in with a few covers. A MAJOR highlight of the night was the cover of Guns N’ Roses’“Night Train” and as soon as the crowd heard the four cowbell strokes, they knew it was ON! The crowd absolutely flipped out and sang the iconic G N’R song word for word.  Myles Kennedy made the high notes sound easy and did a beautiful job. What a fantastic moment!

As the set wound to a close, the band let us have it with some of their bigger songs like “Starlight”, “You’re A Lie” and “World On Fire”. Finally, Slash and his boys gave the crowd one hell of an encore ripping straight into “Avalon” and “Anastasia”.

To say this concert was absolutely incredible would be understating it. This was one of the finest and most technically polished hard rock show’s I’ve ever seen and it will be hard to top.

Andre has been writing for The Spill Magazine for over 12 years, dating back to the print days. His passion for music goes far beyond writing reviews for new music and live concerts, he is also an active musician and producer on the Canadian music scene. Having toured North America and Europe with various acts, he is no stranger to dedication and work ethic new bands must endure to make the grade in today's market; Andre always delivers perspective writing that is authentic and to the point. Mr. Skinner typically covers indie rock, grass roots, electronica and is our resident hard rock and heavy metal specialist. He is extremely selective on what bands he covers for articles and you can rest assured they are ALWAYS band to watch with something left of centre to offer.
RELATED ARTICLES
guns n' roseslive reviewliving the dream
10

by Gerrod Harris on November 8, 2019
Taylor Hawkins & The Coattail Riders Get The Money RCA Records For their third record – and their first is nearly a decade – Taylor Hawkins, yes, of the Foo [...]
8.0

by Gerrod Harris on May 31, 2019
Duff McKagan Tenderness UMusic For his first solo album since his 1993 debut (Believe In Me), Duff McKagan has released the highly anticipated Tenderness. Produced by McKagan and Shooter [...]