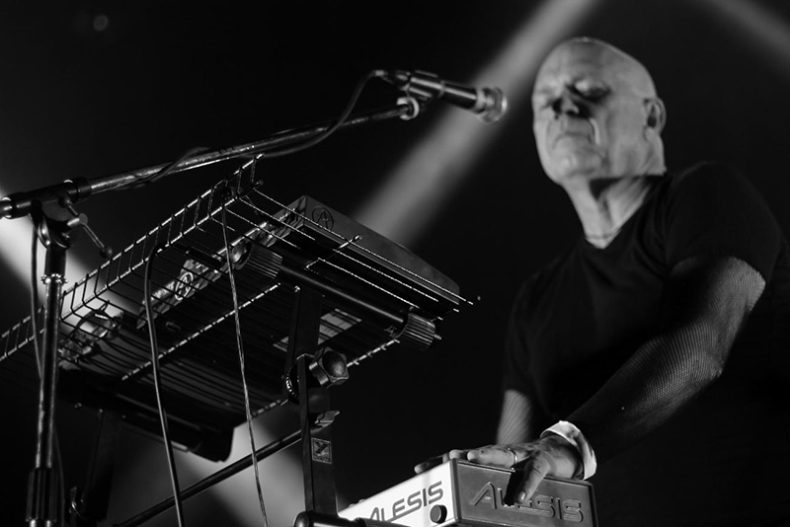 When a good friend casually mentioned that she was going to head down to Hamilton to see Rational Youth, I did not hesitate for a second, and asked if I could join her.  She said yes, and a week later, there I was, visiting Hamilton for the first time without any other mission than to hear one of my most beloved Canadian bands, synthpop legends and extraordinary human beings, Tracy and Gaenor Howe, together known as Rational Youth.

The GPS wasn’t very helpful, however we did make it early to This Ain’t Hollywood, a spacious, comfortable venue, with several tables, a generously stocked bar, high ceilings, an ample stage, and very friendly, helpful staff. People started coming in, mostly locals and a handful of fans that, just like us, had come from Toronto.

Hamilton based YlangYlang was the opening act. Their performance was dreamlike, and at times experimental, sometimes soft and mellow, and other times harsher and more droney.  I cannot wait to hear more of this artist in the future, and it was good to see people in the audience listening and enjoying it. My motto is: always support the opening bands.

Rational Youth came on stage next, this was my third time seeing them. Things started political right off the bat with “This Side of the Border”, from their latest album Future Past Tense, a song that could be considered an anthem of our current state of affairs. Two songs from their 1982 Cold War Night Life album followed — “I Want to See the Light” and “Close to Nature”. It’s a treat to listen to these tunes and find them still so fresh and alive.

“Here It Comes Again”, a powerful, very meaningful song from their new album was next.  Beloved classics kept on being played, such as “Holiday in Bangkok” and “Dancing on the Berlin Wall”, proving that Rational Youth being politically vocal is not something new. “Western Man” was dedicated to an orange character that remained nameless. “City of Night” and “Saturdays in Silesia” had us all dancing, and throughout the set you could feel the love in the atmosphere for Rational Youth.  In a crowd in which most hadn’t been born when the majority of the songs were written, hearing them sing and watching them dance was a treat and a testament of how timeless this band is.

No one wanted the night to end, and an encore was requested.  The last song was “Everything Is Vapour”. My friend and I had to run in order to head back to Toronto, but the band encouraged fans to stick around and I am certain a good time followed. This show was definitely worth the trip and hopefully they’ll be playing in Toronto soon.  It is a rare gift to be able to witness such a legendary band up close and I am sincerely thankful for it.