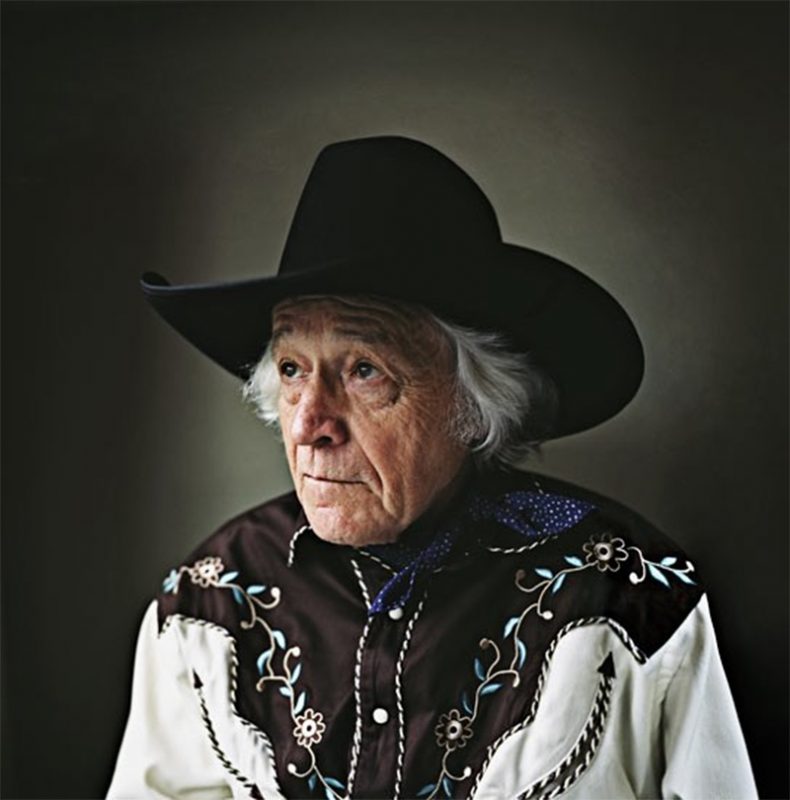 “This is my new favourite brand of whiskey,” mumbles Folk patriarch Ramblin’ Jack Elliott, brandishing a plastic water bottle underneath the green lights of the Hugh’s Room stage. He dresses like a rancher with a black cowboy hat over his white hair, a red knotted scarf around his neck, and a pair of blue jeans. He draws you in with the commanding presence of a veteran performer, even as he’s tuning, plucking at the strings of his guitar.

As part of a three-week tour of the East, Canada and Texas, Jack’s performance in Toronto marked his first since 2010. Friend of Woody Guthrie and mentor to Bob Dylan, the Grammy-award winner is revered in the musical community for some 60 years of service. At 85, the Brooklyn-born urban cowboy is Folk history incarnate, with meandering tales that preserve its stories as no one else can.

“I was trying to be Woody Guthrie,” Jack noted of his earlier years as a rambling troubadour. After falling into the influences of the rodeo, including a guitar-playing rodeo clown, he started playing music on his own and the two eventually got together. His renditions of Guthrie’s “Buffalo Skinners” and “Pastures of Plenty” paid tribute to the Folksinger. The set list went on to include other Folk and Country ballads, including a cover of Jimmie Rodger’s classic “Waitin’ for a Train”—yodels and all.

Of course, the Rambler’s songs were enlivened by his stories. Tales of ‘60s Greenwich Village and The Gaslight, where he played alongside Dave Van Ronk; Peter, Paul and Mary; and Bob Dylan. Other stories made slightly inexplicable reference to Gordon Lightfoot with a broken arm and ranchers chasing their cattle in four-wheelers.

A highlight of the evening was hearing Jack perform, “Don’t Think Twice, It’s Alright.” His interpretation reflected the knowing understanding that comes from a full and well-traveled life. The raw and honest acceptance in his rendition strained the bitter bite from the Dylan tune and left a hushed silence over the audience.

Elizabeth is a Toronto via Caledon writer whose rural upbringing left a lasting love of anything with a banjo and an upright bass. She scours Toronto venues for both the musical talent and the beers on tap.
RELATED ARTICLES
hugh's roomlive reviewtoronto