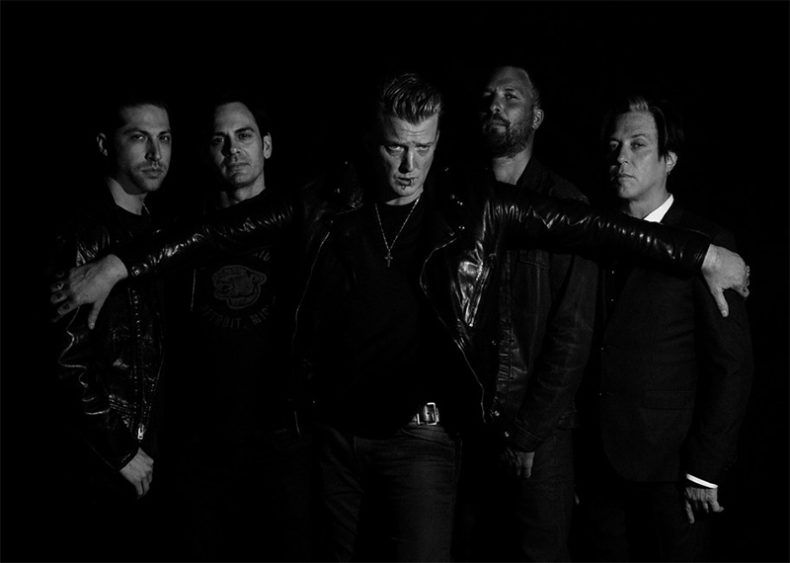 On August 25th, 2017, Queens Of The Stone Age released their newest record, Villains. Building on a similar direction that the band carved on their previous album, 2013’s Like Clockwork, and with Mark Ronson helming the project, the record is among some of the band’s strongest material and will certainly be a contender for album of the year. Following a string of European dates and festivals, Queens Of The Stone Age took kicked off their Villains tour in New York. On September 9th, the third stop of their tour, the band hit up Toronto’s Budweiser Stage along with show openers and alternative rock’s rising star, Royal Blood.

Royal blood kicked off the show at 8:00 with “I Only Lie When I Love You”, the lead single from their release from earlier this summer, How Did We Get So Dark?. Seeing as the band is in the midst of promoting that record, their set consisted of a solid mix of new material along with older tracks from their 2014 self-titled debut. Their forty minute set was fueled by an ambitious hunger to win over the crowd, resulting in a performance that didn’t let up as the band ditched their slower material in favour of their fast paced and heavier tracks. What I enjoy most about a Royal Blood concert is the amount of energy the duo – consisting of Mike Kerr on bass and lead vocals and Ben Thatcher on drums – can pack into their set. Furthermore, the band sounds just as powerful as some groups double their size. Their set included “How Did We Get So Dark”, “Little Monster”, “Loose Change”, and “Figure It Out” among others and ended with the heavy “Out Of The Black”. All in all, their set gave me a sense of solace that the future of rock is not all indie in tone. 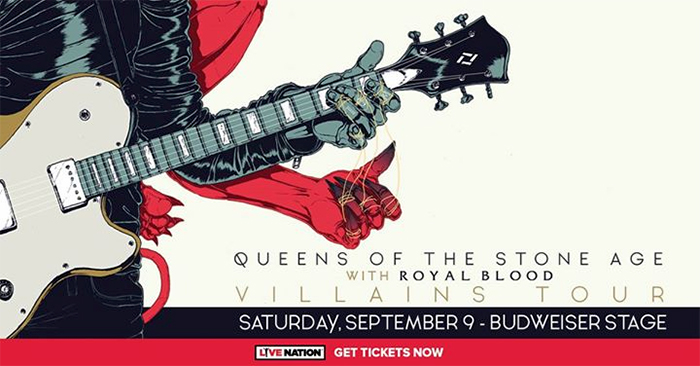 As the line goes from “Feet Don’t Fail Me Now”, “Me and my gang come to bust you loose”, Queens Of The Stone Age wasted no time in getting the near sold out audience on their feet and dancing. They opened their set with the aforementioned song, much like how Villains opens, immediately putting their funky step forward with a track that playing with bouncing rhythms, ambient textures, and sinister undertones. Their two hour set continued to include material from across their career while also playing through a fair amount of material from their most recent release. Homme’s vocals are as smooth as ever as he switches from his powerful tenor voice into a heady falsetto- resembling Bowie circa 1976- and his structured yet seemingly improvised guitar work is even slicker. Jon Theodor keeps a tight groove on the drums and laid out two impressive solos, one in the middle of “No One Knows” and the second in the shows closer, “A Song For The Dead”, while bassist Michael Shuman further held down the pulse while adding rougher screaming backing vocals. The group with rounded out with Dean Fertita who would jump between the keyboards and the guitar without missing a beat and guitarist Troy Van Leeuwen, modern rock’s most understated rhythm guitarist and a strong competitor to Homme’s own charisma as he shuffles across stage like a vampiric Elvis. Needless to say, the band was in top form and was beyond tight as they brought hard rockers like “My God Is The Sun”, the Villains six minute epic “The Evil Has Landed”, “Little Sister”, and the quintessential, “Go With The Flow” along with sexy and sleazy numbers of the likes of “Smooth Sailing”, “The Way You Used To Do”, and “Make It Wit Chu” to life. It is also important to note that they also performed “Avon” and “The Lost Art Of Keeping A Secret” for the first time on this tour at this show.

Quite impressively, the band played the quirky and punk fueled “Head Like A Haunted House” before moving into “I Appear Missing” and “Villains Of Circumstance”, two melancholic ballads. They were performed with a contrasting sense of emotion. There was no gradual shift in tone, the band just seamlessly did this. Furthermore, I don’t believe any rock band could truly take the ambient verses of “Villains Of Circumstance” and perform them with such a level of conviction and skill in a concert setting without deflating the energy from the show. Few bands could make such a switch sound so effortless, and even fewer could do so while still having one of the most energetic and explosive concerts of the summer. Following an incredibly impressive set, the band returned for a two song encore consisting of “You Think I Ain’t Worth A Dollar, But I Feel Like A Millionaire” and their classic track with the best drum intro since Zeppelin’s “Good Times And Bad Times”, “A Song For The Dead”. As mentioned, the band extended the song with a drum solo and also included an incendiary solo from Homme and a level on spontaneity from the band as they contributed an array of licks to give the song a truly epic performance.

As I have said in the past- and not that I needed any reminder- Queens Of The Stone Age is one of the best bands out there today. Their performance proved just that and more as they took the pop influence and turned it into a hard rock odyssey that took Toronto into the desert and left us dancing to Homme’s blues. There were no frills; neither visuals nor an intricate light show, rather the band only employed the use of a set of strobe lights with some light smoke, giving the show a bare to the bone rock & roll feel where it was entirely about the music. Few bands could hold that many people captive without the help of additional props but Queens Of The Stone Age did so with ease. Homme and his gang of misfits stand as the dirtiest and sleaziest band of rock & rollers who embody a sinister and villainous attitude while playing a collection of well written songs that run on infectious grooves with a rough edge while emphasizing the need to always push the boundaries of art. If you have yet to see Queens Of The Stone Age, you are truly missing out.

A passion for music has always been a part of Gerrod’s life. As a young boy, he was raised on a steady diet of the music from The Chili Peppers, Aerosmith, The Stones, Prince, and others from his mum. Raised in the GTA, Gerrod continued to foster his love for music by attending a wide range of concerts and learning the drums. His unapologetic passion for music has no bounds and has spread to a wide variety of styles, whether it be the 90’s rock that sound tracked his teenage years, the jazz he studied in university, or his newfound love for hip-hop. He recently received his bachelors in music and education from York University and is passionate about writing and reviewing good (and less than good) music. Gerrod is also the drummer and songwriter for a Toronto based rock & roll band, One In The Chamber.
RELATED ARTICLES
budweiser stagelive reviewmatador records