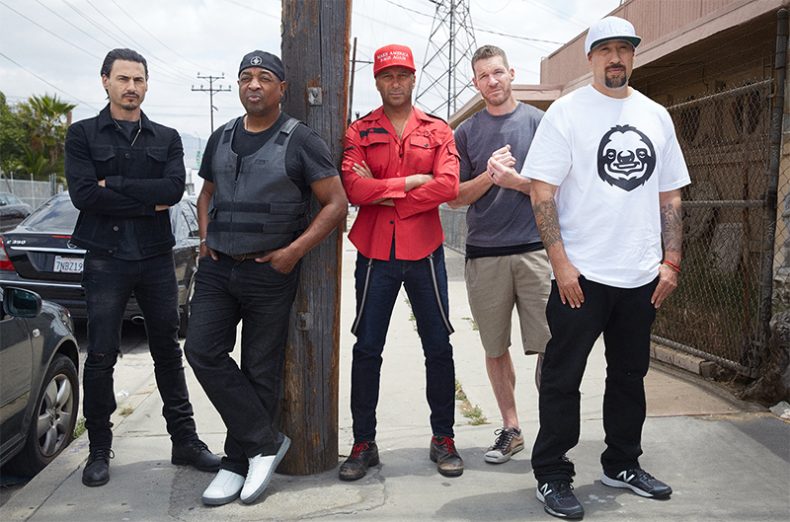 When the initial announcements came out about supergroup Prophets of Rage, with Rage Against The Machine members Tom Morello, Tim Commerford and Brad Wilk and replacement singers B-Real (Cypress Hill) and Chuck-D (Public Enemy), there was apprehension across the board from fans of all three bands. The thought process was that the band formed merely for a cash-grab when considering the megastar lineup; however, after putting the preconceptions aside and sitting through the show, I can confidently report that Prophets of Rage came out on a mission and put on one hell of a show, regardless of the band’s intentions.

The band kicked things off with its new single, “Prophets of Rage.” This was an ideal primer for the monster hits to come. When they dropped “Guerilla Radio,” a cool 16,000 people went absolutely insane and the concert was officially underway. It was surprising to see that B-Real sang 90% of the Rage Against the Machine songs, while Chuck-D was more of a backup vocalist, doubling up in choruses and singing the odd verse. There’s no question that B-Real is the man for the job; although less angry than Zack de la Rocha, he certainly brought the noise and his A-Game to the Molson Amphitheatre.

Ten songs into their set, the Rage Against the Machine members took an offstage break while Chuck-D and B-Real stepped into a medley of Cypress Hill and Public Enemy hits like “Hand on the Pump,” “Insane in the Brain,” “Bring the Noise,” and “Welcome to the Terrordome,” while DJ Lord ripped it up on the decks. B-Real actually crowd-surfed while singing “Insane In The Brain;” it was remarkable.

The Rage Against the Machine members once again graced the stage and kept the hits rolling when, OUT OF NOWHERE, comes Dave Grohl (Nirvana, Foo-Fighters) who ended up throwing down an incredible cover of MC5’s Kick Out The Jams. It was truly a surreal moment – it went from a Prophets of Rage concert to a Foo Fighters concert for all of five minutes, then Dave just vanished. The crowd obviously went nuts; however, everyone had a baffled look about them. Dave was by far the most energetic dude of the night.

Prophets of Rage then entered act three and closed out the set with “Bullet in the Head,” “Bulls On Parade,” and the MIGHTY “Killing In the Name.” Hearing 16,000 people screaming the words “FUCK YOU I WON’T DO WHATCHA TELL ME” is something I will NEVER forget.

Fans of Cypress Hill, Public Enemy and especially Rage Against The Machine MUST see this band live while they can.

Andre has been writing for The Spill Magazine for over 12 years, dating back to the print days. His passion for music goes far beyond writing reviews for new music and live concerts, he is also an active musician and producer on the Canadian music scene. Having toured North America and Europe with various acts, he is no stranger to dedication and work ethic new bands must endure to make the grade in today's market; Andre always delivers perspective writing that is authentic and to the point. Mr. Skinner typically covers indie rock, grass roots, electronica and is our resident hard rock and heavy metal specialist. He is extremely selective on what bands he covers for articles and you can rest assured they are ALWAYS band to watch with something left of centre to offer.
RELATED ARTICLES
cypress hilldave grohllive review