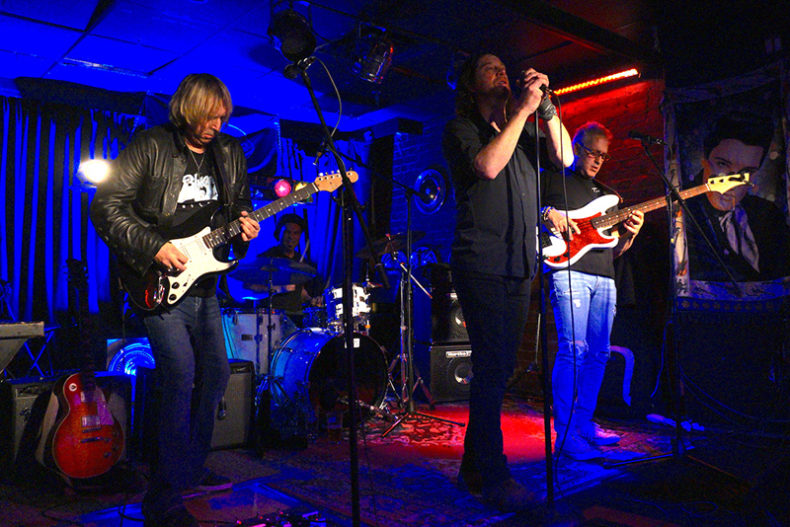 Paul Nelson has been performing for a lot of years, playing with Johnny Winter, Eric Clapton and Slash to name three. He even earned himself Grammy nominations and an award for producing Johnny WInter’s Step Back. He has a distinguished solo career in his own right. On April 6, 2018 he brought his band to The Cadillac Lounge in Toronto.

Nelson and his band play their own distinct take on blues and rock and roll, often combining the two genres with much success. Nelson opened both sets with instrumentals, which set the tone for both parts  of the show. From the beginning notes, Nelson promised and delivered two sets of gritty music and he had the band to do it. They performed as a tight unit and the three musicians (they also had a lead singer who did play some percussion),  were able to fill the stage with rocking sound.

Ethan Isaac provided the perfect vocals for the songs, while David Gross’s bass playing was a highlight of the evening. He provided solid backing, in conjunction with drummer, Go-Go Ray.  All the while, Nelson played his heart and soul out and his guitar work was dazzling. His slide solos were bang on and there was no question that Nelson was the star of the show. But to his credit, he was comfortable letting his band take the spotlight often for solos and their own moments.

The band played many cover versions. Amongst them, “Suzy Q”, “Born Under A Bad Sign”, and  “Jumping Jack Flash” were great, but it was when they did songs from their most recent album Badass Generation that the band was in their element.

This was good old fashion blues infused rock and roll. It was a night of blistering hot playing on a cold Friday night in April in Toronto. Great show!

Born and raised in Whitby, Aaron discovered music through his love of The Beatles. This led to a career in radio, writing for various publications, and ultimately a radio show about The Beatles (Beatles Universe), which ran for over four years. When not immersed in music, Aaron enjoys spending time with the loves of his life -- his wife Andrea, and daughters Emily and Linda (all of whom have an intense love of music too).
RELATED ARTICLES
live reviewtoronto