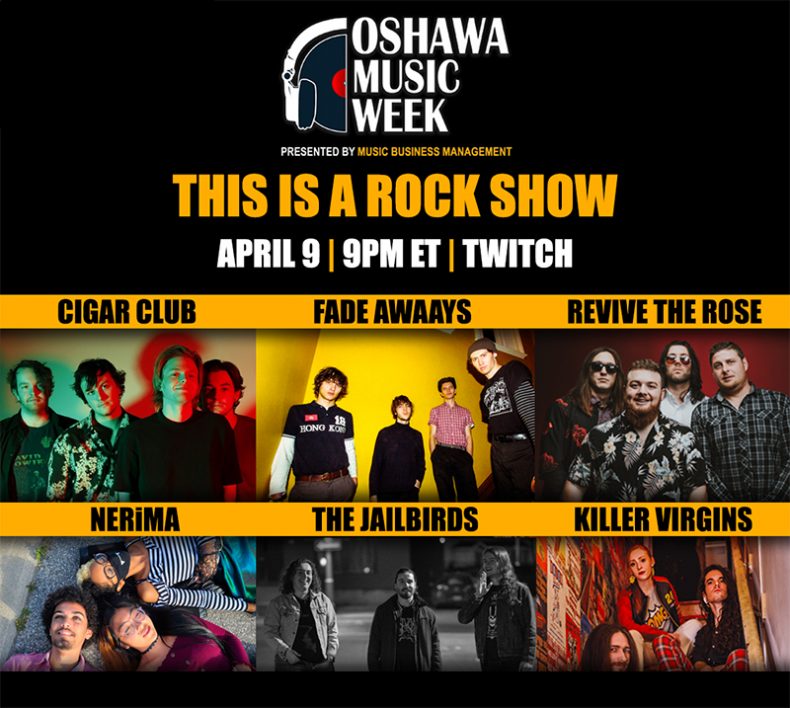 The annual Oshawa Music Week has gone virtual for 2021 and has filmed a series of performances out of The Oshawa Music Hall Concert Theater for their rock showcase. The concert features six different bands from all across Ontario, including Fade Awaays, Nerima, Cigar Club, The Jailbirds, Revive The Rose, and Killer Virgins, and was filmed and recorded professionally by Roaming Buffalo Productions to make an engaging showcase of some of the best rock the province has to offer.

Showcasing a new, four-piece lineup, The Jailbirds took the stage first to open the show. As one of Ontario’s most promising, up-and-coming bands, their performance set the bar high for the night with a barrage of classic hard rock driven music. Accented by Myke Penny’s vocals and killer guitar solos and lead lines, the tight performance sounded like a band hardened by years of touring, not a lineup formed within the last few months. Songs like “Black Madonna” and recent singles, “I Will Move On” and “Dull My Brain” made for a jaw dropping show that firmly established them as one of the best new rock bands Canada has to offer.  Finding a middle ground between Zeppelin and Alter Bridge firmly established them as a band you must watch out for with its thoroughly enjoyable performance.

Following was Durham Region’s Nerima, an indie rock band in tone with alternative rock radio of today. The band performed through a handful of songs ranging from pop-infused to atmospheric. Among their material, “Secret Love”, an arpeggiated pop rock ballad that was played with clean and distorted dynamics, was a definite highlight.

Toronto’s Cigar Club took the stage next. Opening their set with the dynamic “Like White Flats In Winter” – a single they dropped last week – Cigar Club ushered in a cinematic rock vibe reminiscent with the likes of Arctic Monkeys, Royal Blood, and Queens Of The Stone Age. Driven by a strong sense of modern alternative rock songwriting and fantastic guitar tones, Cigar Club set themselves apart from their contemporaries with an authentically cool vibe that lives up to their name.

Up next was Toronto’s Killer Virgins. Their high-octane brand of alternative rock falls between Queens Of The Stone Age and St. Vincent and made for an excellent performance. Driven by lush, sultry vocals set over fuzz laden guitar licks and a driving pulse, listening to Killer Virgins is reminiscent of bouncing around in a packed and sweaty club – something we are all long overdue for. Their ability to capture this sense, however, is immaculate. The band is the sound of edgy alternative rock of the last decade on the brink of chaos with just a touch of pop sensibilities in the songwriting: think if The Beaches had more of a rock flair, or if Nirvana played pop, then you’d have Killer Virgins. This is yet another band that we should all be aware of.

97.7 HTZ FM’s Rocksearch 2016 winners Revive The Rose took the stage sporting a true modern rock spirit with their song, “On You Own”. If you could imagine a Canadian Foo Fighters, you’d have Revive The Rose. As they continue to draw hype with recent releases such as “Need You Now” and their own brand of beer, Bar Down Lager, the band delivered a hard-hitting set that lived up to the excitement they’ve built over the last year. Among their fantastic set, songs like “Come A Little Closer”, “Moxie”, and the absolute anthem that is “Bar Down” truly demonstrate why Revive The Rose is a hard-rocking force worth all the excitement and more. Between Andy Colonico’s Grohl-like vocals and presence, the beast of a rhythm section, and the intertwining guitar parts, Revive The Rose is all killer with zero filler.

Closing off a strong night of live music is Fade Awaays. Hailing from Toronto, the band took the stage with a sound nostalgic of The Tragically Hip. Their set kicked off with the soaring vocals of “As They Do” before diving int the mid-tempo and slightly grungy “Meditation Medication”. The four-piece band created a balanced and full sound, largely thanks to their rich vocal harmonies from each member of the outfit. The band stood strong and brought a big sound that fell between alternative rock of today and the ‘90s to close out the night.

Over the last decade, Canadian artists have become a significant leader on the charts. Naturally, the independent scene within Ontario has blossomed and Oshawa Music Week’s This Is A Rock Show captured some of the best up-and-coming artists that Toronto, Durham Region, and the province have to offer. Among the strong six-band set, listeners should pay close attention to The Jailbirds, Cigar Club, Killer Virgins, and Revive The Rose as to what the future of Canadian rock looks like. While all bands performed well, these artists stole the show. If anything, after watching This Is A Rock Show, the urge to support local and independent music scene should be as strong as ever; Oshawa Music Week’s showcase was a fantastic sample of some of the best indie, alternative, classic, and hard rock that Ontario and, in some cases, Canada have to offer, each of whom are more than deserving of your time and attention.

A passion for music has always been a part of Gerrod’s life. As a young boy, he was raised on a steady diet of the music from The Chili Peppers, Aerosmith, The Stones, Prince, and others from his mum. Raised in the GTA, Gerrod continued to foster his love for music by attending a wide range of concerts and learning the drums. His unapologetic passion for music has no bounds and has spread to a wide variety of styles, whether it be the 90’s rock that sound tracked his teenage years, the jazz he studied in university, or his newfound love for hip-hop. He recently received his bachelors in music and education from York University and is passionate about writing and reviewing good (and less than good) music. Gerrod is also the drummer and songwriter for a Toronto based rock & roll band, One In The Chamber.
RELATED ARTICLES
cigar clubdull my brainfade awaays
8.0