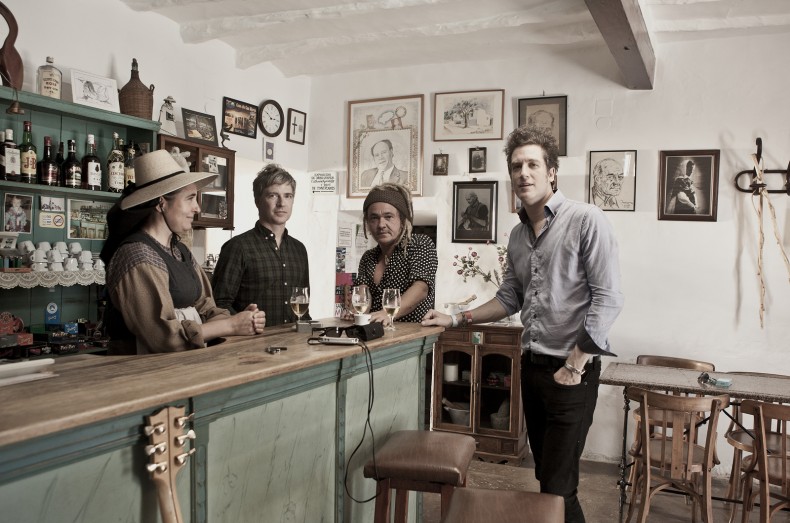 Just what we needed….Nada Surf delivering the existential goods!

At exactly 10:10pm, the band from New York City, New York brought a Horseshoe Tavern crowd back to where it all began in 1996, as the alternative bandmates Nada Surf played inspired songs from their 1996 – 2015 era, much to the delight of the sweaty, packed crowd. More than an hour and 40 minutes of relentless, unleashed vocals from magnetic frontman Matthew Caws showed us his effortlessly high energy professionalism and want to entertain the crowd.

The band filled the intimate area with warm vibes and tight instrumentals as they traded smiles and humourus vignettes with the contentedly mellow crowd, who seemed more like friends than an audience of music fans singing along to their favorite songs. At least Matt was honest about repeating the same playlist from New York and Washington over the last week, yet it was hard not to get swept up in the song memories of this band’s past. Although Nada Surf was fighting feedback from the speakers at the start of the set, Matt’s sense of humour, married with his centerpiece vocals, led the band to perform with a flawless backdrop. Frenetic bass player Daniel Lorca literally looked like he was making love to the bass (“Slappa da basssss, mon!”), while Doug Gillard’s nimble guitar playing was great to listen to. Ira Elliot brought the pain on the drums like there was no tomorrow with some solid shredding. Nada Surf kept the 20 song set fun and diverse with high octane standout songs like “Happy Kid”, “Baccardi”, and “The Fox” juxtaposed with heart wrenching ballads like “Believe”, “See These Bones”, and “When I was Young”. Medium tempo’ed songs such as “What is your Secret?”, “Teenage Dreams” , “Jules and Jim” and “Always Love” were contrasted with new songs such as “Friend Hospital”, much to the delight of the faithful audience. After a 5 minute wait, the beginning of the encore opened with THE ultimate “how it all began hit” from 1996’s High / Low album “Popular”. Amazing. They continued with “Always Love”, then ended with the party anthemed “Blankest Year” as the crowd sang along, not caring that it was a Monday night as the next work day was creeping up on most of us.

After an hour and 47 mins later with a few beers left on the stage, Nada Surf said goodnight, and exited, as they expertly avoided the disconnect that some bands go through while stopping through Toronto. The intimate atmosphere was well worth the price of admission. A great binge-worthy show for an underrated band. Well done, boys!