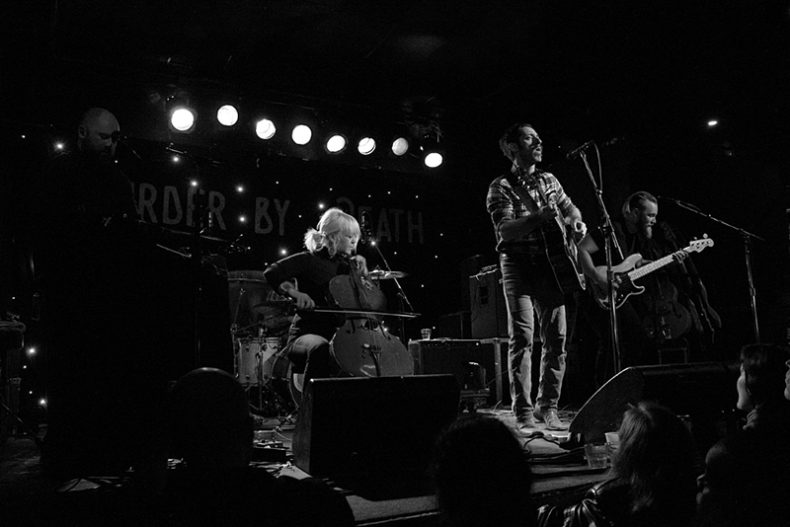 Lee’s Palace was packed with admirers eager to listen to the stories told by Murder By Death tonight.

A Murder By Death show is a remarkable affair. It’s easy to get lost in the music – it creates some uncanny nostalgia for a time past, or maybe another dimension. There is something familiar about the stories told through their inimitable musical style. It could be that recurring dichotomy between good and evil. Maybe it’s the songs about whisky drinkin’, gunslingin’, and being on the run. Even songs from their latest release, The Other Shore, which is partially set in the void of space, are tinged with that age-old tale of love, loneliness, and redemption.

The stories told by Adam Turla’s signature deep baritone voice create a singular atmosphere during their live show. The various and unconventional instruments provide a worthy soundtrack. Sarah Balliet’s cello features heavily in their set, and is at times used as a lead guitar, others as a driving bassline. David Fountain adds ornamentation on keys and trumpet, and eerie notes are created by steel guitar. A sturdy backbone is provided by gregarious bassist Tyler Morse and versatile drummer Dagan Thogerson.

The buildup up at the show was comparable to the buildups in many of their songs. Their set started with their newer, almost ethereal blend of folk and Americana, with songs off of recent albums. A major highlight was “Space,” which Turla described as one of their favourite songs to play live. During a goosebump-inducing crescendo towards the end of the song, Balliet utterly shredded the cello.

Murder By Death fans are always along for the ride, thoroughly interacting with whatever the band can throw at them musically. Newer material was interspersed with old favourites. With almost two decades of songs to choose from, they gave their collection due justice. Towards the end of the set they brought out some old guns: Rousing sing-along “Brother” was followed by the melancholic “Until Morale Improves the Beatings Will Continue,” and the ominous ballad “Comin’ Home.”

Despite a handful of songs Turla described as “incredibly depressing,” the mood at Lee’s Palace was light-hearted. Turla gave a shoutout to his dad in the audience, who had visited Toronto back in 2012 to see their rather rowdy show at the Bovine Sex Club. Later, at the request of a front-row fan, they played the quite obscure and entertaining “Pizza Party (At Gloria Estefan’s House).”

Turla mused that this was the most people they’ve ever had at a Toronto show… maybe even any show they’ve played in Canada. They were gracious and grateful, and before their encore, Turla explained their regret at not being able to stick around (presumably to sample more pizza). With good reason, however, as they are “skedaddling to Graceland” for their show Saturday evening with Frank Turner.