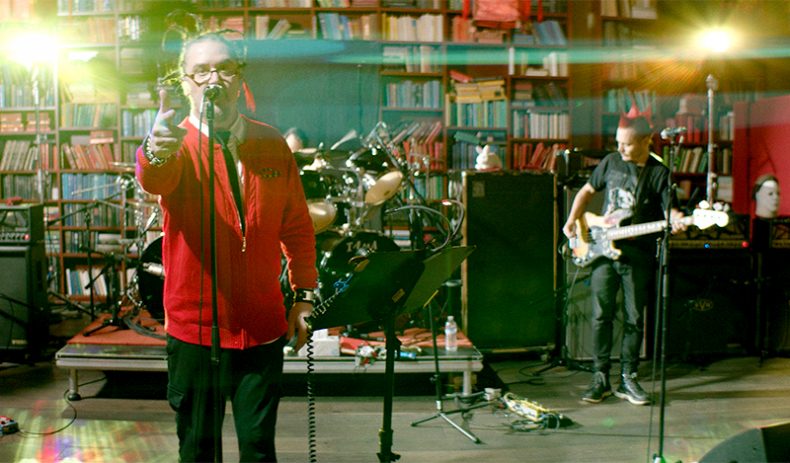 One of the best things to happen in 2020 was the resurgence of Mr. Bungle, the experimental band, whose release of California in 1999 left their fans on a high note before they disbanded over 20 years ago. Now they’re back, but as a thrash metal outfit which is perfectly suited for these loud and annoying times.

I was front row center for Mr. Bungle’s San Francisco show in February earlier this year to have my face properly melted, so when I heard they were putting together a Halloween show I was totally on board.

The Night THEY Came Home! welcomes the group back to their hometown of Eureka, CA where they honourably put on a rage-fueled performance in the Main Library. Their set consisted mostly of their newest release, The Raging Wrath of the Easter Bunny Demo, as well as some covers from their other bands (Slayer, Circle Jerks) and a brilliant tribute to Eddie Van Halen with “Tora, Tora” and “Loss of Control”.

The stream begins with some humorous BTS footage of the members getting ready for the show. Before the opening act, Neil Hamburger talks some illustrative crap on other bands while sloshing his drink around. Most of Hamburger’s jokes took jabs like these; “What did the first toilet say to the second toilet? Let’s call our group KISS.” “What is the only thing worse than Police Brutality? The Police Discography.”

The band arrives on stage to deliver an intense dynamic performance that only this incarnation of Mr. Bungle could deliver. The addition of Dave Lombardo and Scott Ian really put Mr. Bungle over the top, and added meticulous thrashing to Bungle mainstay members Trey Spruance, Trevor Dunn, and Mike Patton.

The use of Multicam recording and quality audio capture made me feel like I was right there in the room, and every song came through my speakers hot. “Bungle Grind” and “Speak Spanish Or Die” (Stormtroopers Of Death) were my favorites from the set and I was only a little disappointed they didn’t play their single “USA”, released earlier this year. Definitely check out their new album The Raging Wrath of the Easter Bunny Demo!