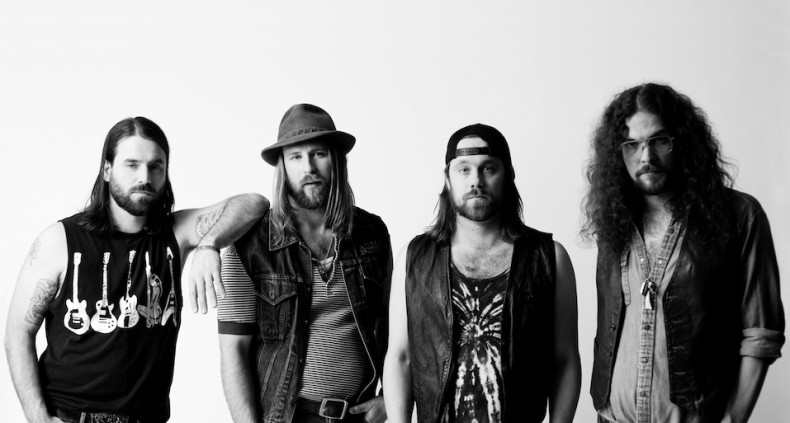 We all stood there by the end of a very long evening, ankle deep in sweat and spilled beer, wishing we didn’t have to go home.

All hyperbole aside, however, that is essentially what happened. Your beloved sons from Hamilton brought their incredible friends from Bishopbriggs, Scotland, to celebrate the release of their sophomore album Sittin’ Heavy, treating those lucky enough to be in attendance to an incredible homecoming.

Years from now, there will only be whispers and rumours. Whispers of piercing guitar riffs, and soul-penetrating voices.  Rumours of energy-pounding moshing, and daring crowd surfing. Yet you will be unfazed, and able to speak as though you were there, being lucky enough to read these few words that are bound to become a part of your subconsciousness.

The Phoenix Concert Theatre was sold out!  Someone rubbing up against you because there is just nowhere else to go kind of sold out. If you go pee, you might not find your friends again kind of sold out.

All this before the special guest The Temperance Movement played a single note.

The phrase you had to be there comes to mind, but that makes for terrible writing and short story telling doesn’t it?

The Temperance Movement was a wonderfully matched companion to the high octane, super duty, Monster Truck DFWTT-311.  They brought unlimited energy, tight musical cohesiveness, and are led by an incredible frontman. Phil Campbell was like a hybrid between Bon Scott of AC/DC, and Chris Robinson of The Black Crowes/ Chris Robinson Brotherhood. In his movements he resembled a marionette. He moved with grace and an eclectic style that was endearing to the crowd.

“Hey Mother-Fuckers.  You are amazing!  Thank You,” he told the crowd, and they shouted back in kind. The Temperance Movement is out on tour promoting their 2016 release, White Bear.

Monster Truck opened their set with deep penetrating road rage, and asked the deeply philosophical question, why are you not rocking?  It took but a moment for the audience to respond, and embrace the reality that rock ‘n’ roll would save their life tonight.

“How many people have our album?,” Jon Harvey asked the crowd and received an overwhelming cheer and witnessed a sea of waving hands, indicating that there were very few people in attendance who haven’t heard of Sittin’ Heavy. Based on the impressive number of fans dressed in the official Monster Truck jean jacket, patched like the cover of their album, this was not surprising.

“We are going to play a lot of those songs, but we’ll pepper in some of the old ones.  Don’t worry,” he added.

“For the People” was a fan favourite. It has a great groove and rhythm, and sounds phenomenal live. It has that big, feel good, festival vibe to it. It was responsible for the first sing-a-long, and brought on the first wave of crowd surfing. On the album, the song features Ian Fletcher Thornley as a guest guitarist, and last night, Paul Sayer of The Temperance Movement accompanied Jeremy Widerman to a delighted crowd.

“The Enforcer” was a gut-stomping hit that made the floors shake, but “Things Get Better” made a tremendous impression on me, and was perhaps the unsung hero of the evening. Not only does it have a wonderful hip-swaying rhythm, but it has a booming chorus that rings “I got a feelin’ things’ll get worse, before they get better.”  If it was any other band, any mention of sports or hockey would be irresponsible, and simply uninteresting, but this is Monster Truck.

Throughout the booming chorus, a young man who squeezed his way to the front of the stage sang his guts out repeating “things will get worse, before they get better.”  What made the moment special, however, was that he waved his Toronto Maple Leafs hat proudly in the air, hoping the band, or anyone else in the audience understood the irony. Hats off to the young man.

Once again, Monster Truck delivered a high tempo, explosive, and unforgettable performance. At the moment they are by far Canada’s best rock ‘n’ roll band, period.  This Juno Award-winning quartet is full of energy and deep friendship. Throughout the evening Harvey and Widerman spent much of their time interacting with the audience, but never did they abandon their bandmates who were stuck manning a powerful rhythm section that makes Monster Truck such a force.

At this point of the evening there are were waves upon waves of people surfing in a bottomless ocean of sweaty humanity. An honourable mention goes out to the young man who surfed while wearing a florescent yellow vest, and the enormously corpulent man who tested the strength not only of security, but all those that willfully carried him to his destination. It will remain a mystery how his ass didn’t end up anchoring the bottom of the ocean.  I won’t even mention the intellectual giant who decided to surf with a lighter.

Sadly, once again, fans couldn’t help themselves and continued the selfish, self-absorbed practice of taking terrible photos, or worse, horribly sounding video, in a vain childish attempt to say ‘I was there’. Widerman, on several occasions, climbed the speakers by the side of the stage, and serenaded the crowd with his guitar solos. He made a very generous attempt to get closer to his fans, yet some of them responded by not paying attention, and stabbing his eyes with their flash.  They were not the story though.

The story was the band.

Based on the energy and the smiles emanating from each band member, family and friends were in attendance.  I’m not sure who was all there, although it is safe to assume that this close to Hamilton, the entire Monster Truck entourage was definitely there. I spotted a woman on the balcony, near the right side of the stage, grooving along to every beat and note of every track. I would have missed her and never looked up, if it hadn’t been for Widerman’s outstretched hands, reaching out, trying to get close. It reminded me of the Blue Rodeo song “Lost Together,” when the band played a live show and their fans were on the other side of the river. Tonight, the energetic crowd was the river.

This was a very tender moment in a night full of ear bleeding, fist pumping, body slamming, and guitar shredding.

The encore featured “For The Sun” and “Sweet Mountain River.”  Surprisingly, I didn’t see many glowing objects in the air. I witnessed a surprising ocean of good old-fashioned lighters. The good news, if the glass if half full, is that maybe some value and respect for the art of music is returning in some small way, or if you are an eternal pessimist, you’re probably thinking there will be a lot more cancer patients in the years to come.

I leave that up to you.

Those lucky enough to have tickets for night number two, enjoy the show.

Grzegorz Kieszkowski originally hails from Bydgoszcz, Poland. After his father was released from prison in 1984, for his involvement with the Solidarity movement, Greg and his family escaped to Canada in 1985. He makes Cobourg his home, along with his wife and two small children. Greg is a graduate of York University, with a double major in English and Philosophy. Music has always been in his blood, and although his tastes have matured, he will always have a soft spot for the Metal days of the late 1980’s. He is a full time English teacher and a professional photographer. Part of the allure of writing is the possibility of conversation, and he would love to hear your comments and opinions. Please feel free to visit his personal website - grzegorzkieszkowski.com.
RELATED ARTICLES
live reviewmonster truckthe phoenix