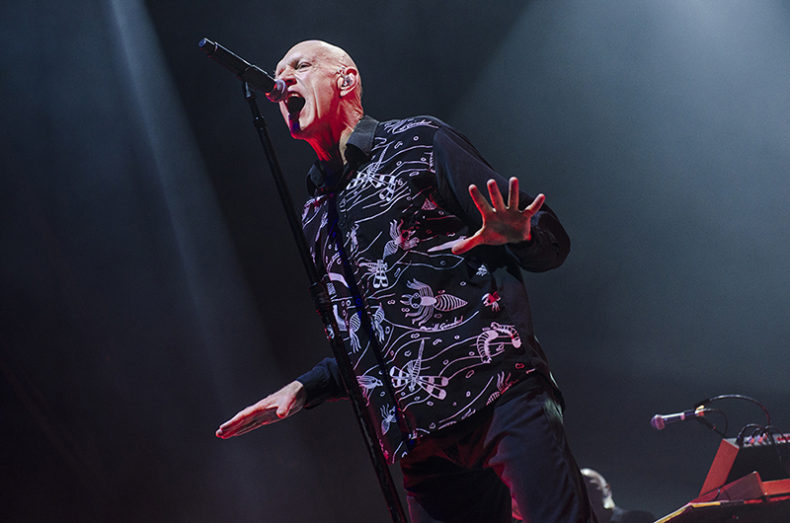 Who would have thought they’d be back so soon? Only three months after their last sold-out show in Toronto, the Australian political-rock powerhouse Midnight Oil made their proud return to the city. A huge venue upgrade, previously playing the Danforth Music Hall on May 20th, and an impressive supporting bill resulted in Midnight Oil’s largest Toronto show to date. Dedicated fans excitedly welcomed back ‘The Oils’, and during a time of such undeniable political unrest the Aussie rockers poignant lyrics and anthemic compositions hit home harder than ever.

With a sizeable gathering of fans, Matthew Good himself included prepped the eager Saturday night crowd for a great evening. With multiple crowd sing-alongs, and even a number being performed from within the audience, Good’s energy was infectious and left the whole place cheering for more. After a quick changeover and a minimalist stage set-up The Oils were raring to go.

The audience stayed on their feet singing along to the high-energy opening track of the show “Read About It” from The Oil’s breakthrough album 10, 9, 8, 7, 6, 5, 4, 3, 2, 1. Each member of Midnight Oil had their time to shine throughout the set but the irrefutable showman of the group was lead vocalist Peter Garrett. Right out of the gate Garrett broke into his rigid, fast moving dance moves and as he shuffled around the stage. You can’t help but draw comparisons to the quick seizure-esque movements of David Byrne, as Garrett robotically flailed to the powerful rock sounds The Oil’s so flawlessly performed.

There were multiple highlights of the world-class musicianship on stage that night; blistering extended guitar solos and impressive harmonica licks resulted in raucous applause. Not to mention drummer Rob Hirst’s show-stealing moments taking lead vocals on a couple occasions and even performing from a compact upright drum set from the front of the stage for a few tracks. The Oil’s live presence that gained them international fame all those years ago held up as strong as ever, captivating the audience with their unique brand of anthemic new-wave and hard rock.

The group has always been known for their strong political opinions, and Peter Garrett pulled no punches as he revealed a “Dump Trump” t-shirt midway through the set to huge applause, and even took a few jabs at Trudeau and Canada’s treatment of indigenous people between songs. We can assume we at least didn’t get lectured quite as sternly as audiences south of the border though.

Political rants were thankfully kept brief and to the point, allowing the group to rip through a career spanning set, satisfying every loyal fan in the house. Classics from the hit albums Diesel and Dust, and Blue Sky Mining garnered the biggest crowd reactions, with a full house of dancing fans singing along during tracks like “Beds are Burning” and “Forgotten Years”. Other highlights of the night included a stripped down version of “My Country” which served as a moving ballad, and a booming rendition of “When the Generals Talk”.

Midnight Oil’s live performance is undeniable, and their catalogue of thought provoking and passionate songs are more relevant now than ever. We can only hope The Oils continue performing and creating with the momentum of this past year, as their fans are clearly here to stay.

Growing up in the dull suburbs of Southern Ontario, Elijah gravitated towards the city at a young age. With a healthy addiction to live music, and a constant itch for discovering his new favourite band, he finds himself happily submerged in Toronto's music scene. With his work appearing thus far in Sock Monkey Sound, and The Spill Magazine, he's going to keep this writing thing going for a while.
RELATED ARTICLES
budweiser stagelive reviewmatthew good