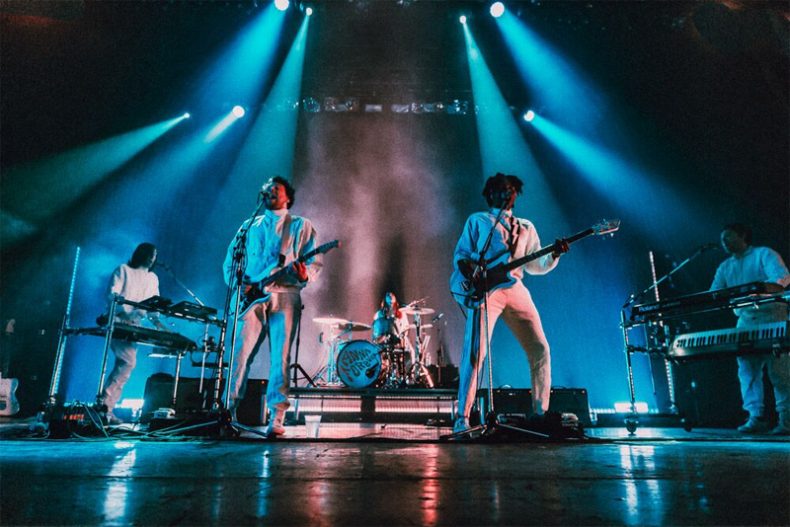 It was no surprise that there was a big buzz looming around tonight’s performance by Metronomy as their latest album, Metronomy Forever has been positively acclaimed by many reviewers. After touring Europe, Asia, and South America, the veteran band led by frontman Joseph Mount are now taking over North America with their eclectic mix of electronic and rock music.

Dressed in white jumpsuits, Metronomy played an impressive 21-song set filled with eye-popping sounds that got the crowd dancing all night. “Lately”, “The Bay”, and “Wedding Bells” were the perfect start to the night, as all three songs contain catchy beats with their wide range of synths.

All five members displayed their talents throughout the show. Drummer Anna Prior effortlessly showcased her clean vocals and drumming in “Everything Goes My Way.” Bassist Gbenga Abelekan kept rocking his bass guitar and hyping up the crow. The highlight of the night was keyboardists Oscar Cash and Michael Lovett performing their own DJ set of “Boy Racers” and “Lying Low.” As they move closer to each other and start rocking their set, the whole crowd’s energy level went up.

Though Metronomy played the majority of songs from Metronomy Forever, and also added some of their past hits, including “The Look” from The English Riviera, which got the crowd singing loudly to every word as if everyone was waiting for that moment. Mount gets the crowd singing proudly with “Love Letters” from the album of the same name to transition to the sultry “Sex Emoji”.  The audience loudly cheers on for more music before performing a stripped-down tune of “Upset My Girlfriend,” and ending the night with one of their classics, “Radio Ladio” from their 2008 album Nights Out.

Metronomy delivered a performance to remember, as it was evident everyone was feeling satisfied on the way out.

Andrew is an aspiring photographer hailing from Toronto, who is currently in his final year at OCAD University. Ever since he took pictures with his old iPhone at an Imagine Dragons concert in 2018, it began his goals and dreams to pursue a career to photograph live music, and to work in the music industry. He loves concert photography because it combines his passion for photographing memories and listening to music. His favourite genres of music are pop, electronic, and alternative rock.
RELATED ARTICLES
live reviewmetronomythe danforth music hall