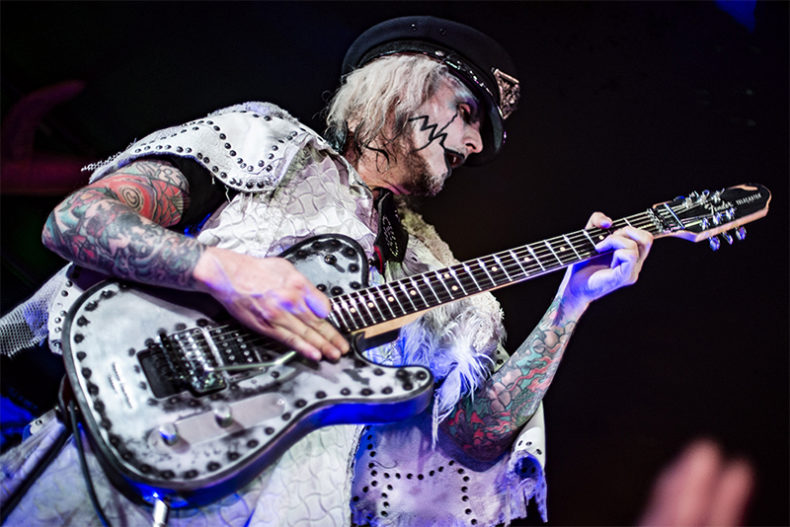 Having worked with both Marilyn Manson and Rob Zombie, he’s well known sonically as a guitarist, but most people don’t recognize the name John 5 when they hear it. John 5 and the Creatures have been around for quite some time though, and they’re just as heavy and just as theatrical as both Manson and Zombie, which is, of course, likely why they all work so well together. The only major difference is that they’re purely instrumental, but that’s because they’re good enough to not need a vocalist. He brings his own heavy guitar riffs and dark, out of the box persona to the stage when he joins bands like those, but the Creatures is his own beast and is a show like nothing you’ve seen before.

The tour they’re on now hit the Brass Monkey in Ottawa this past Friday, March 22nd, and the venue was jam-packed with all kinds of different people. A classic dive bar in the basement of a strip mall in the suburbs of Ottawa is a pretty unexpected place to host shows of this stature, but could you really think of a better spot for this show in particular? The Monkey brings in some of the biggest names that aren’t arena-ready or just would rather play a cool venue for a smaller crowd, but that’s a whole different review.

John 5 and the Creatures were joined by LA’s Dead Girls Academy and Wisconsin’s Jared James Nichols on the tour, which was an outstanding arrangement in all aspects. The two bands truly highlighted and contrasted the different aspects that are inside of the very diverse band that is John 5 and the Creatures. Dead Girls Academy kicked off the night heavy and got the crowd amped up with their polished LA post-hardcore, powerful aesthetic, and booming presence on stage. The energy in the room turned up nearly as soon as they began their set and was not in any danger of dimming down when Jared James Nichols took the stage.

Running onto the stage with big hair and an even bigger presence, Jared James Nichols and his band captured the crowd with vigour and didn’t let them go until they left the stage. Almost resembling Monster Truck, but with a blues-infused rock style and clear dedication to focus on pristine guitar prominence in their sound makes them an undeniably easy choice to join John 5 and the Creatures on tour.

While the opening acts were fantastic, when the John 5 and the Creatures stage crew started inflating the props and setting everything up for the show, you just knew it was going to be something unique. The doomsday vibe was clear with inflatable tombstones, ghosts, and carnival props intertwined with Marshall amps. Usually when you go to see a concert, you don’t expect that much of a theatrical aspect, but it was truly a full show. Fully loaded with beloved tracks by the band and a wicked slew of covers, it’s a wonder the amps didn’t blow up the inflatable props. While they didn’t wear the ape masks like they used to, there was no lack of killer makeup, glow in the dark guitars filled with green liquid and evil clowns and other creatures running around the stage with pitchforks.

All theatrics aside, there is no mistaking the guitar legend that John 5 is and to see him play in his own band outside of his collaborative work is something special. It’s undeniably outstanding when a show without any lyrics to sing along to captivates a crowd in the way that this one did.

Music makes the worst situations bearable and the best situations even better. I'm just here to share the inside scoop and anything you may have missed, while I establish my own voice in the industry. Born and raised in Ottawa, I never go anywhere without a set of headphones. Live music has been my vice for as long as I can remember and sharing stage side stories is a major bonus.
RELATED ARTICLES
jared james nicholsjohn 5live review