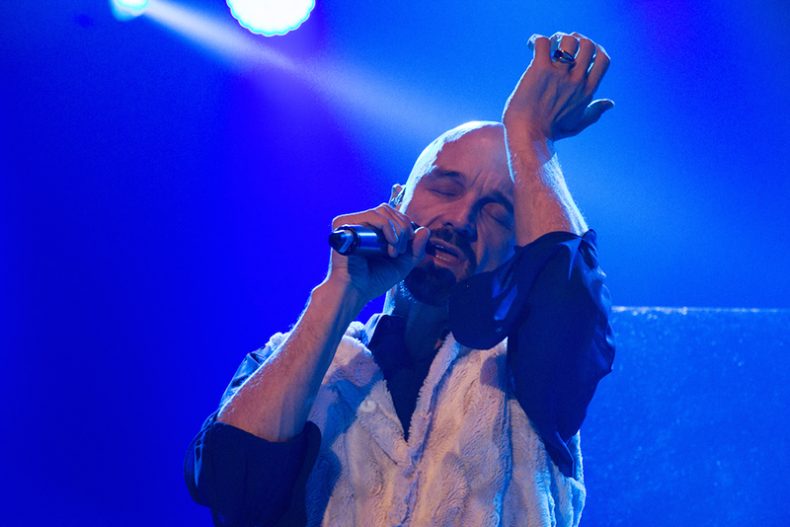 Generally when people reference legendary Manchester bands they just mention the Big Two – Stone Roses and Oasis. Occasionally The Fall may also get a mention but one band should stand comparatively alongside those aforementioned. James is so much more than one hit song (“Sit Down,” as if you didn’t know). Formed in 1982, some 25 million album sales later they are still selling out arenas in 2016.With the release of album number thirteen, Girl at the End of the World, the band embarked on a U.K. tour promotion for the release. I was fortunate to attend their “homecoming” show at the huge Manchester Arena, billed as “the largest indoor concert arena in Europe.”

Due to poor traffic regulation of patrons I only managed to catch the last two songs of the second support Jack Savoretti. My seat position actually proved an excellent view of the stage slightly on the left side and a few rows up from the standing area. Quite impressive with a myriad of styles overlapping, backed by his soulful and individual vocal style. It definitely piqued my interest into doing some followup musical research. 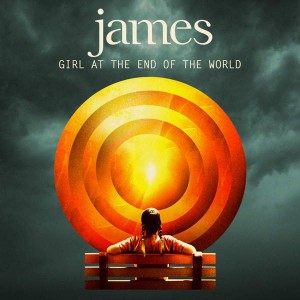 JAMES – GIRL AT THE END OF THE WORLD ALBUM REVIEW

Appetizers eloquently served and it was on to the main course. Opening with “Out to Get You” was an unusual choice. This song was actually the only non-single to make it onto the band’s “Best Of” compilation, starting life actually as a single B-side. Getting a second chance, it became the opening track on the Laid album and it subsequently became a staple in the band’s live set. First thing that immediately struck me was the instantaneous rapport between James frontman Tim Booth and the Manchester crowd. The outpouring of respect, warmth and genuine love was a two-way process. Instantly latching onto the chorus the whole arena immediately became engaged in the performance. After a brief introductory joke about Southerners (the north/south divide appears to be an English thing) “Move down South” (one assumes this is ironic) was the first song played from the new album. The James devotees, however, welcomed the track like an old favourite. No differentiation with new numbers that you would expect from most audiences.

The hero-worship that extended to singer Booth allowed him to walk into the crowd on the second song, walking on their outstretched hands. Track three, a beautiful version of a recent-years single “To my surprise,” saw him actually stage diving into the same crowd – their devotion seemed almost of messianic proportions. However, before engaging physically as well as musically he had a few cautionary words for his disciples. Apparently the previous night some over-imbibed audience members were too enthusiastic in their attentions – and he was clearly exhibiting the physical scars of the incident. Point made and fully taken on board he was off again engaging with the members in the gods’ seats in the rafters. While his bizarre self-expressive “dancing” – and I use the term very broadly – was bizarre to view it didn’t directly impact on his quite unique vocal style.

New single “Nothing But Love” allowed the band to utilize different musical instruments from the regular band format. Mandolin and trumpet built the tempo before the Manchester masses once again took over in the climactic chorus.

Many bands both current and longstanding rarely perform such an extensive set. James also varied their set on an almost nightly basis. This helped to keep it sounding fresh for both band and worshippers alike. There was, however, a special almost religious feel to actually being present in the band’s hometown show as part of their congregation. James continue to tour and release albums on their own terms. The shifting sands of musical change and trends just seem to pass them by.

A double encore featuring the iconic anthem in the first one ended with the classic “Tomorrow,” which when delivered acoustically was simply breathtaking. “Tomorrow” brought things to an end. Truly a magical evening, and one I thoroughly enjoyed. I never fully appreciated James’ iconic place in the legendary Manchester musical history before. I now do. A band with a quite brilliant back catalogue and they are not yet finished contributing to those classics.

I'm a 40 + music fan. Fond mostly of Rock and Metal my staple-musical food delights. Originally from Northern Ireland I am now based in the UK-Manchester. I have a hectic musical existence with regular shows and interviews. Been writing freelance for five years now with several international websites. Passionate about what I do I have been fortunate already to interview many of my all time musical heroes. My music passion was first created by seeing Status Quo at the tender age of 15. While I still am passionate about my Rock and Metal I have found that with age my taste has diversified so that now I am actually dipping into different musical genres and styles for the first time.
RELATED ARTICLES
jameslive reviewmanchester