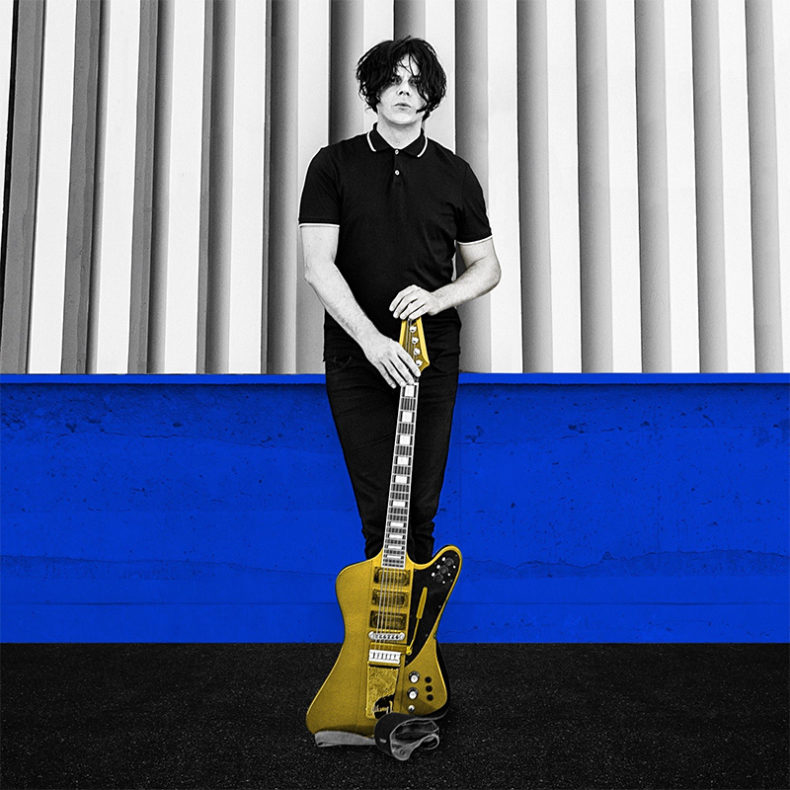 Jack White and his band of four came out strong last night to the largest audience on the tour thus far. Without making any eye contact with the crowd, White picked up his guitar and immediately led the band into “Over and Over and Over”- one of the more exciting singles off his newest album Boarding House Reach. While there have been mixed reviews for this album from fans (perhaps because of the risks it takes), there’s no denying its translation on stage. With everyone’s phones stashed in their Yondr pouches (a rule put together by White to avoid distraction), the attention was all on White.

With ferocious energy, White then slammed immediately into “Corporation” before slowing down a bit with “Dead Leaves and the Dirty Ground”, an old White Stripes number. White probably could have left the audience to do the singing on this track (and in some cases he did).  The energy definitely picked up from here and White began to interact and play to his audience.

For long time Jack fans, the real treat came early in the night when he played two White Stripes songs brought back on this tour. With a splash of anger, White kept the energy up as he thrashed his way through “I Think I Smell a Rat”. The whole band took on White’s chip-on-the-shoulder persona with simple riffs and steady drumming from Carla Azur.  From this tune, White went immediately into “Little Bird”, easily having the crowd sing the riff alongside him.

Fans were treated to songs from all of White’s projects in a predictable manner. Fans of The Dead Weather enjoyed “Cut Like a Buffalo” while lovers of The Raconteurs were dazzled by “Steady As She Goes” with Jack singing “Steady as she goes” and then crowd replying “Are you steady now?”.  Impressively, White’s band composed of new and old members kept the evening about White while showcasing their own skills. On bass, Dominic Davis acted as band leader, keeping soundmen and fellow players in check. On keyboard, Quincy McCray and Neil Evans brought new life to songs that White has been playing on stage for years.

Closing the main set, White’s band played “I’m Slowly Turning into You” with the same ferocity it started with, albeit with more smiles for the crowd. It wasn’t over though. A few moments later, they were back on stage for an eight-song encore. White shook his hips and had the crowd doing the same through “Sixteen Saltines”, “That Black Bat Licorice” and “Fell in Love with a Girl”.  The whole place was vibrating! “Ice Station Zebra” was the one song lost on the crowd. Sounding much different than earlier in the tour, and in part due to the bass at Budweiser Stage being way too full at that point, fans eagerly awaited the next song and they weren’t disappointed. This is where “Steady As She Goes” came around followed by a fantastic performance of “Icky Thump” that had the whole crowd shouting “You can’t be a pimp and a prostitute too!”

Slowing things down, with “Connected By Love”, White chose to speed it up to close the show with “Seven Nation Army”. As if you thought he wouldn’t! Picking up a beat up old guitar, this song left the whole crowd with sweat running down the back of their necks and cramps in their calves from jumping up and down. White was rugged as he bounded across the stage, encouraging the crowd’s chance and screaming into the microphone. Just like that, the first lag of the tour came to and end.

Likely the greatest advertisement for Jack White’s ability and appeal is in the make-up of his concerts’ attendance. Literally every demographic, every age group, every ‘tribe’ as Alan Cross calls the fans of alt-rock, is represented. There is no doubt that as we all filed into the recently rebranded Budweiser Stage, the one thing uniting all of the spectators was the simple love and appreciation for one of the most enigmatic (and some would argue “legendary”) performers in modern rock music. Based on appearances, it may have been the only commonality that we all shared.

Ever the showman, the build-up to White’s appearance on stage included a countdown on several big screens featuring White himself tinkering with the time before the band and then White walked on stage to thunderous applause. The thunder did not end with the applause though – this was a show built on the thunder created and perfected by White’s almost peerless guitar ability and blues-inspired fretwork, both band and audience seemingly breathing in inspiration with every shredded guitar solo and chord change. Though it was White’s guitar prowess that likely brought many in the door, and it was unquestionably on how throughout, it may have been his ability to conduct his whole band, managing every rise and fall throughout the 90-minute set that stood out the most. Clearly, the band have rehearsed a great deal together (especially considering the variety in their setlists from one show to the next) and there is an absolute abundance of talent in the four-piece ensemble. Perhaps most notable was drummer Carla Azar, whose pounding percussion was a constant throughout the show and one that White went to on many occasions to cue changes in tempo or volume.

If there is a negative here, it was in the way the whole performance sounded for the audience. Clearly White’s volume and levels were the focus, and drumming was never a problem, but to me there was a lot of unnecessary drone to the bottom end of the bass and keys, so much so that there was a constant sonic haze to every song which was set at far too loud a volume in what was already a very loud gig. Whoever was on the soundboard put too much focus on White and not enough on the sound of the band as a whole.

Seeing one of the legends of modern rock, especially one so closely tied to guitar, was both inspirational and somewhat of a relief in that it was a very successful and very passionate advertisement for the fact that guitar-rock, no matter what the media claims, is not dead.

The Spill Magazine is a Toronto-based online publication dedicated to covering the independent music scene with a strong focus on our thriving hometown talent. Our writers bring you up-to-date news, in-depth features on musicians and reviews for the latest CD releases. We also travel to the front lines for all local festivals including Canadian Music Week and North by Northeast. Don’t forget to check out our Facebook and Twitter pages for all daily Spill updates.
RELATED ARTICLES
budweiser stagejack whitelive review