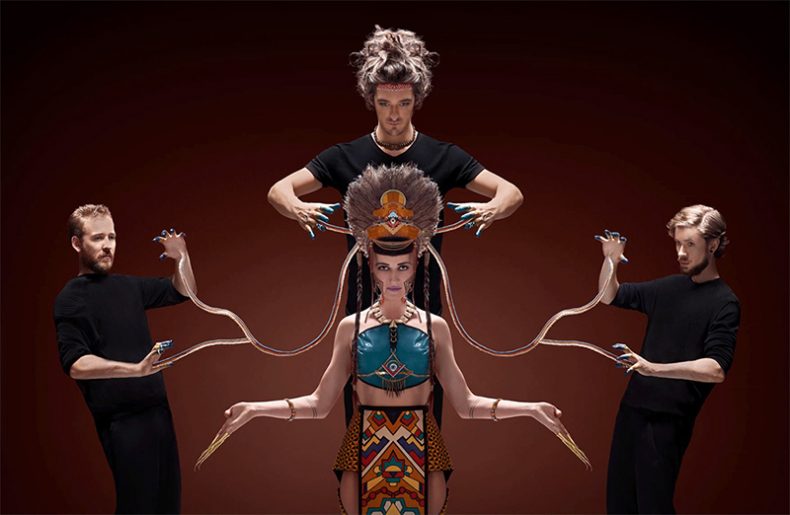 Hiatus Kaiyote (HK) tore it up in Toronto’s historical venue the Phoenix Concert Theatre on Friday, July 29. The band played to a packed house, but not before the majestic Tanika Charles showcased her debut album Soul Run. And the disjointed dancing begins…

Hiatus Kaiyote describes its sound as “multi-dimensional, polyrhythmic gangster shit.” This cannot be summed up more accurately by the Melbourne, Australian Future-Soul quartet. The rhythmic geniuses behind the project are Naomi Saalfield aka Nai Palm (vocals, guitar), Paul Bender (bass), Simon Mavin (keyboards), and Perrin Moss (drums, percussion). Nai Palm made her way onto the stage sporting sequined shorts, black tights, woolies, and black boots. And underneath her leather jacket was the best graphic T out there – Ned Flanders in zombie apocalypse form.

The almost 90-minute show was artfully curated by bringing in tunes from HK’s 2013 album Tawk Tomahawk, as well as their latest from May 2015 – Choose Your Weapon. Some memorable tunes that made the crowd go wild were “Shaolin Monk Motherfunk,” “Laputa,” “Borderline with My Atoms,” “By Fire,” and “Breathing Underwater,” which by the way, was nominated for Best R&B Performance at the 58th Grammy Awards. The band kept things real, jamming between songs, with Nai Palm doing some regular check-ins with the audience and their energy.

HK kept the audience in awe with some fresh new songs, whose titles were not disclosed. They had the memorable lyrics “Close to Your Molecules” and “The Words We Don’t Say,” respectively. As stated by HK fan Erik, “the best way I can sum it up is to say that about every three seconds, there was some sort of tasty curveball. There were so many unexpected twists, and just really creative choices. They are definitely pushing the envelope in a huge way. Their use of tension was amazing! And the release to the tension; a lot of the time, there was that Dilla swag feel, which is still full of tension! I felt like I was oscillating between dancing like crazy, to standing dead still staring at the stage with my jaw dropped.”

To bring the night to a close, Nai Palm whipped out the acclaimed Grammy-nominated Neo-Soul tune “Nakamarra” followed by the oh-so-gooey song “Molasses” to top off the set. The two-song encore really did the trick; according to serious HK fan, Nick, “this concert knocked my brain out of my skull, and as it began its slippery slide down my spine, the simultaneous stimulation of soaring vocals and rhythmic gymnastics combined with the loss of basic motor skills made for a sumptuous stew of ecstasy.” It doesn’t get much better than that, folks.

Originally from Toronto, Giselle is exploring the worlds of entertainment and social change through a musician's lens. With a background in Environmental Studies and Music Business, she works to establish her own voice in the music scene.
RELATED ARTICLES
live reviewphoenix concert theatretoronto