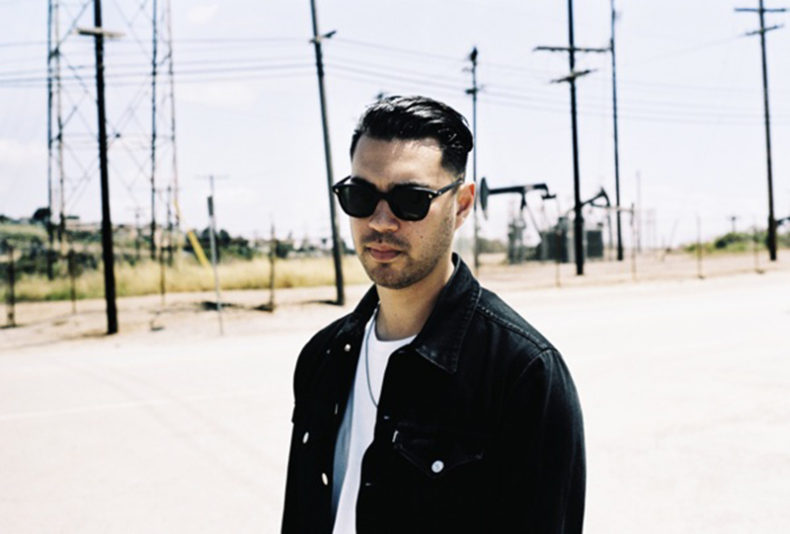 Abrasive…..assaulting…..in-your-face…..borderline-obnoxious – that’s what the evening of October 6th at the Horseshoe was all about…..and it was fucking fantastic because of it.

The Hanni El Khatib/Bass Drum Of Death North American leg of the tour hit Toronto with a resounding bang, bringing along with it the add-on bonus of local boys-of-Garage-mayhem Pet Sun. The triad of musical intensity this Sunday night proved to be much, much more than was expected – well, maybe it was expected by the roomful of fans that stopped by for just this reason. But for others who weren’t exactly ‘in-the-know’ of what is going on with each of these three bands this was truly an eye-opening experience.

Pet Sun, a relatively new face on the scene of Garage-Rock, sauntered in with a whisper and set themselves up quietly behind their gear. The humbled, soft-spoken Parth Jain (drums) subtly introduced the band to the crowd, while the remaining three silently took their positions on the stage. This relatively uneventful entry was soon shattered beginning with the first chord of their set. Blaring and reverberating, pounding and crashing, the boys managed to reveal their true selves beautifully through their own music. The subdued presence that the four members of this Hamilton-based band exploded into a lyrical and musical insanity with each and every song they put forth to the slowly-increasing crowd. The set proved so electrical, in fact, that onlookers in the seated area fast became immersed into the music so much as to provide a standing-room-only area directly in front of the stage. Muddled lyrics simply screamed out over the crowd, all brought forth by the tongue-wagging and charismatic Stéphane Senécal-Tremblay. A wonderful surprise is what Pet Sun provided to the evening through their performance, and it was only about to get wilder.

As the floor began to collect more and more fans of the second act, Bass Drum Of Death managed their way onto the stage, to finally blast into song with almost no warning whatsoever. It was a welcome shock, and the night developed more into a Garage-Rock retrospective than just your everyday plain ol’ rock show. The distorted vocal-styling and vintage-guitar wailing of John Barrett married brilliantly with his two band-mates right from the get-go. The guitar/guitar/drum combo forced their way into waiting ears with an assault of auditory bliss. Absolutely no pauses or dead-air were to be found; neither within each song nor in-between any of the numbers for almost the first half of their performance. Bass Drum Of Death managed with just three members an electric performance that filled the room with an abundance of organized noise and managed to work the crowd into an onlooking frenzy. Noted by Barrett was how pleased they were to be performing alongside Hanni El Khatib on this tour, and their intensity + knock-em-dead performance helped to prove that they were an obvious pick to tag along. Through their entire set they exhibited equally powerful levels of musicianship as the headline act to follow. 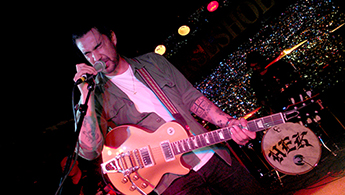 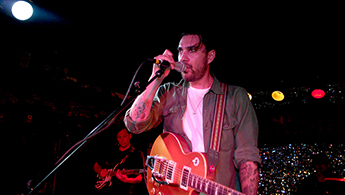 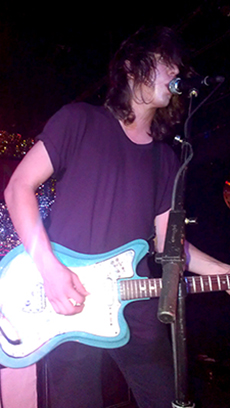 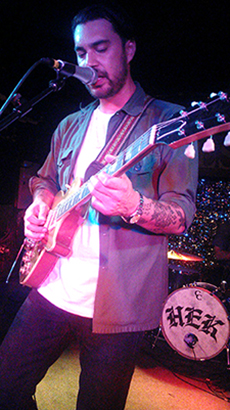 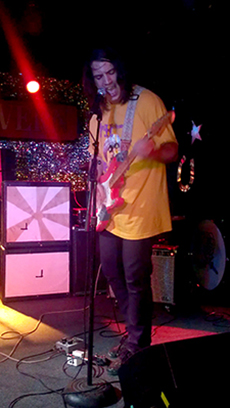 Rounding the 10:30-mark of the evening, Hanni El Khatib and his crew slickly entered their setup. With his hair gelled back and an almost-perfect collection of loose strands poised down over his forehead, Hanni appeared as a sharply-dressed Elvis Presley of modern-day proportions….with subtle Mick Jones accents for good measure. With polished showmanship and a strong sense of professionalism, Khatib hit hard from the first note of “Head In The Dirt” (the title track from his latest release) straight through to the end of the night. The music, vocals and primo guitar-work in the forefront, instantly made you aware of just why he and his crew were the headline act for this tour. Bouncing back and forth playing tracks from this and his 2011 debut release Will The Guns Come Out, Hanni El Khatib ripped through the room with an amalgamation of auditory force, rhythmic flair, and a wonderful semblance of finesse and style. Already fan-faves were revealed through performances of “Penny” and “Skinny Little Girl”, songs that instantly resonated with the now full room. The crowning glory of the show was the triad of “Fuck It You Win”, “Sinking In The Sand” and the crowd-pleasing “Family”, a finish to the set that left you breathless and longing to keep the night going. For a Sunday night crowd, nobody seemed to give a rat’s-ass that they might have to work the next day – tonight was all about the music. And considering the band’s 2-album history, it was nothing short of remarkable when Khatib resurfaced on-stage for a single encore, joined mid-way with the rest of the band for a final ‘thank you’ and a bow. Out of breath and all played out, the stage emptied for the last time that night – leaving a roomful of fans with endless ringing in their ears.

Hanni El Khatib continues the US leg of their tour through to the end of this month before embarking to the UK for a handful more shows. If they’re somewhere near you during this time it’s highly recommended that you grab a ticket and get schooled in the art of modern-day Garage-Rock the way it’s meant to be heard. Barring this, if you can’t make it out to the show it’s possible that you may hear the echoes of the music resonating throughout your own neighbourhood – if you should be so lucky.

This Toronto-based artist has worked as a photographer, graphic designer, web designer and motion-graphics designer for the better part of ten years. His love of music both old and new shines brightly through his dedication to The Spill Magazine as Editor and Creative Director.
RELATED ARTICLES
live review