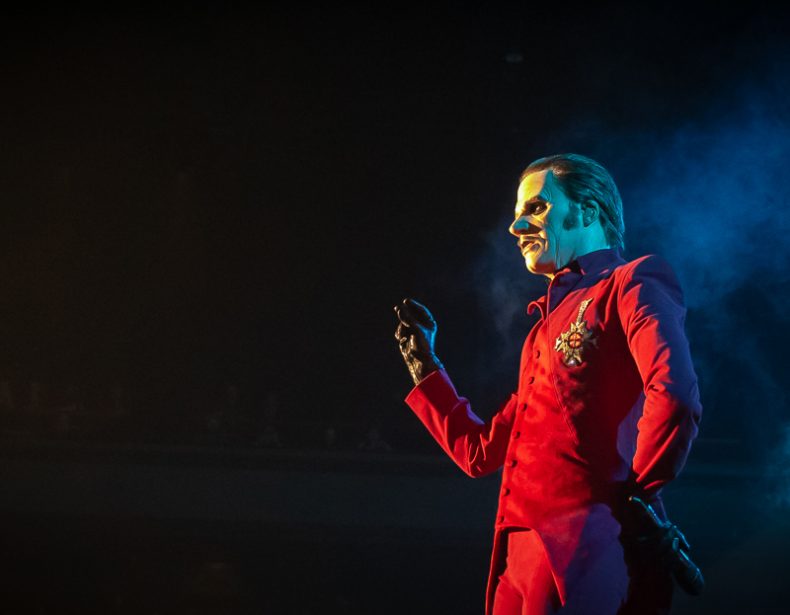 Saturday October 5th, 4:45 PM, outside The Armory in downtown Minneapolis, two lines formed from each of the main entrances in the drizzling rain for the 93X Haunting featuring Ghost.  “The Ultimate Tour Named Death” is a 32-city North American tour with supporting act Nothing More. The Armory is an 8,400-person capacity music and events venue that has historical significance since it was the home of the NBA Minneapolis Lakers from 1947-1960 was declared sold out before Ghost took the stage.

Nothing More took to the stage right on time to a well-packed house. From 10 to 12 feet above the stage, perched atop what can be best described as a diving ladder, vocalist Jonny Hawkins sounded the rotary air-raid siren to kick off their 10-song set with “Let ‘em Burn” the latest single from The Stories We Tell Ourselves.

Their passion and ferocity was infectious and quickly whipped the audience into an excited sing-along frenzy through what we could consider their greatest hits to date.“Don’t Stop”, “Go to War”, and “Jenny” followed. What was missing from this set were “Mr. MTV”, “Here’s to the Heartache” and “Do You Really Want It?” making way for fan favourite, “Christ Copyright” and deep cut  “Fadein/Fadeout”.

Guitarist Mark Vollelunga, bassist Daniel Oliver, and drummer Ben Anderson were tight, energetic, and playful while interacting with the fans when their hands weren’t full. Albeit difficult to take one’s eyes off of the front man, doing so reveals the skill and precision the remaining members bring to the live experience. 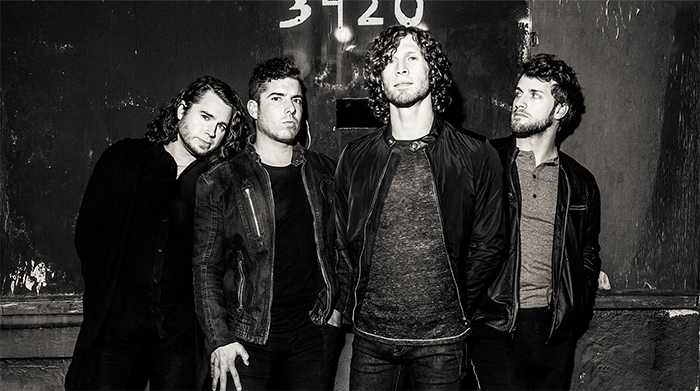 The most expected moment of Nothing More’s time on stage came when “Ocean Floor” began and the audience erupted into cheers knowing that the thunderous sound of “This is the Time (Ballast)” would immediately follow. The collective crowd jumped along as the breakout hit of 2014 boomed through the packed venue. Jonny used the infamous Scorpion Tail (a platform designed to lift him and his custom drum set) to levitate above the stage and add to the rhythmic element of the set. Smiles were abundant throughout the crowd as they moved onto a Skrillex cover “First of the Year (Equinox)” to end their set.

Darkness fell across The Armory and the familiar sounds of “Ashes” began to fill the air, enticing the crowd into singing along with the a rendition of the childhood favourite “Ring Around the Rosie”.

As the Cardinal led the evening with mischievous banter and spirited segues that kept the audience entertained, many in attendance weren’t as familiar with the Ghost back catalogue as the band may have hoped. Songs like “Ghuleh/Zombie Queen”, “Ritual”, “Spirit” and “He Is” were met with lukewarm reactions. During those songs, the well-executed use of intelligent lighting design, fogging, boom charges, and confetti kept the concert goers on their toes.

Things really started to heat up as the set began to wind down with “Satan Prayer”. A hell-inspired, heavily fogged, pyro-filled stage show that kicked the final act of this show in to high gear. Then a crowd favourite “Mummy Dust” soon followed with confetti cannons blasting gold foil confetti and Ghost themed currency depicting the past Papa’s.

The final three songs were crowd favourites: The recently-released, psychedelically-themed “Kiss the Go-Goat” warmed the crowd for the dance party that ensued with “Dance Macabre”. Even security and the bartenders were seen singing and dancing along to the unequivocally, ubiquitous hit from Prequelle.

They ended the evening with “Square Hammer”, and graciously thanked their loyal “parishioners” and the newly anointed that made the evening such a success.

Scott was raised in southern Minnesota, attended the University of Wisconsin – Stout, spent some time abroad and currently resides in Minneapolis, Minnesota with his wife and their two daughters, only son and two dogs. Long time music lover and concert-goer, Scott has attended countless concerts and festivals since 1996. His fondest concert memories include meeting the love of his life at his first music festival. Sneaking into Linkin Park’s first Minnesota show. Hosting the second stage on the Projekt Revolution stop in Somerset in 2004 and pretty much every show he’s attended with his concert cohort, Scott. Yes, there’s two of them! As of late, Scott has started making memories and sharing his love of attending concerts with his children. Shinedown was his oldest daughters’ first show thanks to his cohort, The Interrupters was his youngest daughters’ first show. His son’s first show is still to be determined.
RELATED ARTICLES
ghostlive reviewminneapolis