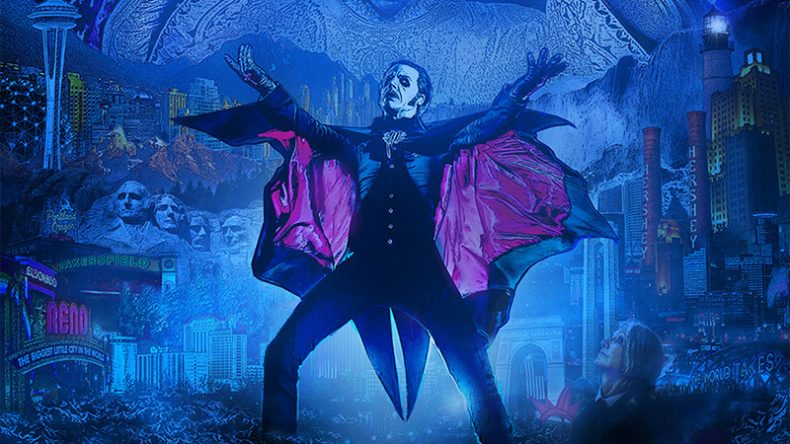 The almighty Ghost returned to Edmonton on their Ultimate Tour Named Death with an astonishing display of live instrumentation driven by top-level showmanship.

I was blown away at the surprisingly low attendance for what is arguably one of the best live acts touring today. Rogers Place was only set up for about half of its capacity, maybe less, and still there was a plethora of empty seats.

The fans who did attend were the ones who know a good show when they see one. You can always tell when the Nameless Ghouls and their fearless leader, Cardinal Copia, are about to strike the stage because you’ll hear the ominous church music start building. It’s a sign that the Clergy is about to warp your brain with a spectacle of a performance you won’t soon forget.

The performance started with a brief dusting of the intro “Ashes”right before the band took the stage with a bang, diving right into “Rats” off of their most recent album, 2018’s Prequelle.

The crowd bought in immediately, and Cardinal Copia’s stage presence was undeniable. He commanded the crowd with such intensity and precision that by the time one note slipped out of his mouth, he had Rogers Place in the palm of his hand. He is metal’s corrupt rendition of Freddy Mercury onstage.

Even more impressive is that the band was so tight and on point, they could be off on their own without the Cardinal and it would be just as impactful. The stage show was mesmerizing with smoke machines, explosions, and an incredible stage design.

The band continued to dive into their immaculate catalogue, keeping the crowd moving with tracks like “Cirice,” “Ghuleh/Zombie Queen,” and “Spirit.” In between a few of the tracks, the Nameless Ghouls showcased their abilities with consciousness-altering guitar solos that sent the entire building into cheers.

The 20-song set-list ended with one of their biggest hits, “Square Hammer.”The night was over, and the crowd roared. The Clergy came and conquered. If the opportunity presents itself for you to catch Ghost while they’re on tour, you’d be doing yourself a huge disservice by not attending.

J.D. McIvor is a journalist covering Arts & Entertainment whenever possible. Serving a genuine passion for the arts, McIvor is constantly looking to bridge the gap between creativity and the importance it plays in our everyday lives.
RELATED ARTICLES
edmontonghostlive review