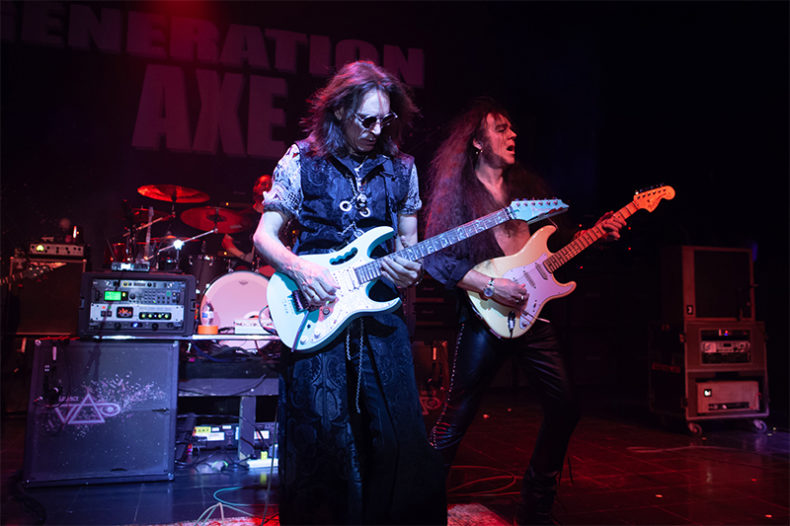 The Generation Axe tour, starring Nuno Bettencourt, Zakk Wylde, Steve Vai, Yngwe Malmsteen, and Tosin Abasi entertained the audience for nearly four hours, which is extreme by any standard. I’m not sure if the five axe-wielding gentlemen are friends in real life but it sure felt like it from my vantage point. There were lots of smiles, fist pumps, unbridled energy and a real, general sense of gratitude from everyone to everyone.

It could have been the American Thanksgiving weekend, or Black Friday hangover, or just a general sense of tension in our broken world because despite the doors opening at seven, it took a very long time for everyone to make it into the venue. The lineup of people wound itself around the Rapids Theater, but eventually, everyone found a warm spot to stand or sit, and a cool beverage or two to go with it.

All five members opened the show together. They played purposefully. They played magically. They established their divinity from the first note and this is why they are part of an axe generation and why rock ‘n’ roll will never die.

Surprisingly, there was a great number of young people in the audience and several times during the performance, the gods shared their journey of climbing the electric mountain. They kept encouraging everyone in the audience who cuts his or her path in life with an axe to keep dreaming and keep playing. Dreams do come true.

After the opening number, the stage was Tosin Abasi’s. I knew very little about Tosin going into the performance despite some research as he is a relatively new artist, but he is indeed a very talented and much seasoned one.

The guitar he played was most unusual. It seemed to curve and looked like a bass guitar. At times he would pound it as if he was a bass player. Other times, his quick fingers drove up and down the frets, to the glee and excitement of the crowd.

Nuno Bettencourt, the guitarist from Extreme, joined Tosin for his final song and remained on stage demonstrating that his abilities are more than words (pun intended). Half way through his set he sat down and teased the audience with a few notes from “More than Words”. He mentioned that there were are a lot of babies born because of that song and that some of them might even be here tonight. There would be no soft melodies here this evening, he remarked, because he came to Niagara Falls to earn his pay, and all the guitarist are getting paid by the note. He’d be damned if he let the other fellas keep most of the money.

Zakk Wylde followed Nuno Bettencourt and thanked Father Bettencourt for sharing the stage that night. He called him the Boston basher or busier (some of the night is a bit misty) and told the fans that not only does Nuno write, play, record, arrange, and produce, he also cooks, cleans and does the dishes. Something that every Irish boy can be proud of.

If you have never been to a Zakk Wylde concert, either as the lead guitarist for Ozzy Osborne, or as a member of the Black Label Society, you need to remedy the situation and take in that spectacle as soon as possible. There are simply not enough words to describe the passion and love Zakk Wylde has for his guitar and the dedication he has to his fans.

The sweat and his passion poured out of him for the entire night. He couldn’t thank the crowd enough for being there and kept saluting the Niagara Falls chapter of the Black Label Society. He kept pumping his chest and whispering thank you the entire time. 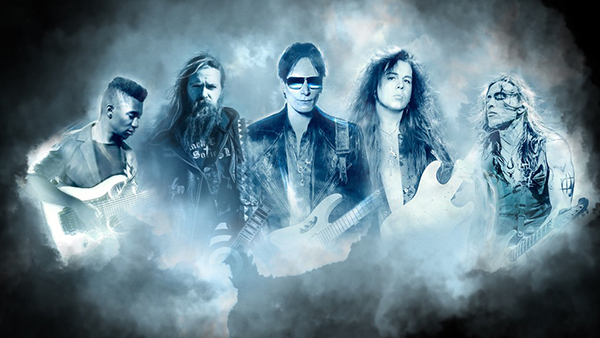 Zakk Wylde was followed by Steve Vai who made his guitar talk and I don’t mean this metaphorically. The sound Steve Vai can make with his guitar is simply amazing. He can make you hear things no other guitarist can. He fooled my ears on many occasions and I swear I heard his guitar utter words, scream with pain, laugh with pleasure, and most certainly gently weep.

At one point out of curiosity I checked the time and noticed that we were three hours deep into the show, and so I assumed that Yngwe Malmsteen must not have been feeling well and that the other members of Generation Axe simply extended their set to compensate, but I was mistaken.

The lights dimmed. The smoke began to gush from every direction and the piercing sound of a proud guitar announced Yngwe Malmsteen’s arrival.

I have to be honest that I was a touch disappointed. All the previous acts had this unquantifiable magical cohesion and the crowd was feeling good and loving the music, but Yngwe Malmsteen was different.

He wore tight leather pants, studded boots, and his tight opened shirt revealed his hairless chest. He kept kicking the guitar picks into the audience with moderate success, and twirling his guitar at his techs between songs. To be honest I felt disappointed, but by the end of his performance I was not only won over but will make the bold statement that despite how amazing everyone else was, I was particularly most entertained by Malmsteen’s style and his attention to detail.

It was like watching a modern-day Bach or Chopin perform at a beautiful concert hall. Except this was dirtier, darker, louder, and smokier, but I don’t think it was any different. Yngwe Malmsteen is an artist’s artist and it was so amazing to see how far he can push his instruments. By the cheers of the crowd, I wasn’t the only one that was won over.

After Yngwe Malsteen’s set, all the members of Generation Axe came out for a few more songs. They played some Deep Purple, Black Sabbath, but the treat of the night came as when Nuno announced that they would commemorate the passing of the late, great, Freddy Mercury’s whose anniversary happened to be this evening. In his honour, all five members performed a recently arranged and very unrehearsed “Bohemian Rhapsody”. It was unbelievable. Each guitarist played his part seamlessly and played it beautifully.

I don’t think anyone wanted to go home and it’s fascinating how quickly four hours of your life can disappear when you are standing and listening to the divine.

The Generation Axe tour continues to hammer down throughout North America until the end of the year.

Grzegorz Kieszkowski originally hails from Bydgoszcz, Poland. After his father was released from prison in 1984, for his involvement with the Solidarity movement, Greg and his family escaped to Canada in 1985. He makes Cobourg his home, along with his wife and two small children. Greg is a graduate of York University, with a double major in English and Philosophy. Music has always been in his blood, and although his tastes have matured, he will always have a soft spot for the Metal days of the late 1980’s. He is a full time English teacher and a professional photographer. Part of the allure of writing is the possibility of conversation, and he would love to hear your comments and opinions. Please feel free to visit his personal website - grzegorzkieszkowski.com.
RELATED ARTICLES
generation axelive reviewniagara falls