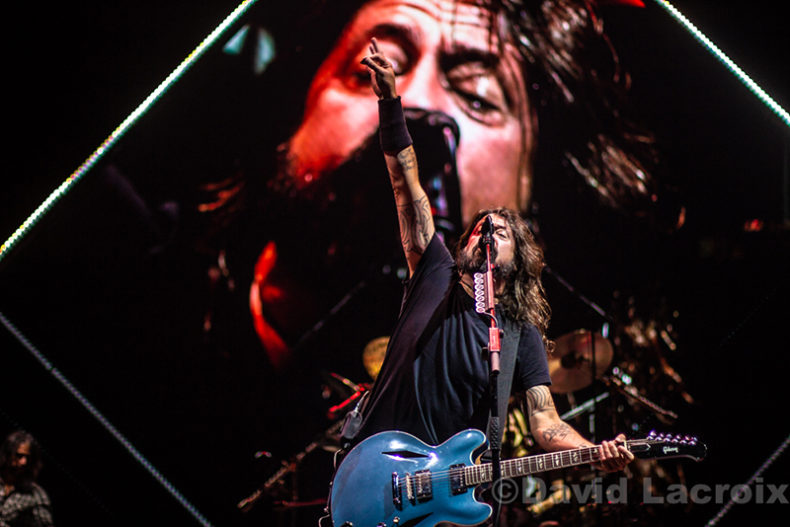 The Foo Fighters love ‘70s rock’n’roll. Performing to a massive crowd at one of Vancouver’s Rogers Arena, the Concrete & Gold tour featured two hours and 45 minutes of arena-sized rock and roll. Pulling at least one song from each album back to his most excellent debut album, Dave Grohl led his cohorts with limitless energy, spending much of the concert ricocheting back and forth like a pinball. From the set’s earliest moments, Grohl forged an intimacy with the sold-out audience and pumped out friendly vibes for the entirety of the riff-filled night.

“All My Life” from One By One served as a springboard and launched the evening into full rock ‘n’ roll mode. Crunching through the robotic guitar riff, Grohl and company oozed with a theatric enthusiasm with the first of a bullet salvo that best defines what the Foo Fighters do. Following up, the soaring, humming guitar melody of “Learn to Fly” struck with immediacy before Grohl and company churned through a sizzling, urgent take of “The Pretender”, before adding on a giant and particularly evil sounding instrumental extension. If you like your rock ‘n’ roll shows to start with a bang, the Foo Fighters do not disappoint.

Well into his third decade of music with the Foo Fighters, Dave Grohl has a tremendous back catalogue of deep cuts; with so many albums, it is unavoidable that many favourite songs not make the Concrete and Gold setlist, however the tour’s musical content is extremely heavy on the singles. Tour merchandise, including a gorgeous poster print, vinyl and an array of shirts, were not only not overly but expensive was extremely affordable compared to the merchandise at your average arena show.

For the uninitiated fan, the Foo Fighters are offering just about everything that they could hope for but the pickings left some of the more dedicated grunge and ‘90s rock fans wanting some deeper cuts in place of radio-worn singles. The Concrete & Gold tour celebrates the band’s most commercial and accessible materials. Grohl’s obvious talent for writing memorable radio-friendly singles is matched by his punk-rock rooted capacities for great rockers like “Hey, Johnny Park” or “Stacked Actors,” which didn’t make this tour’s cut. Of course, the band can’t play everything but the evening’s many ‘70s rock covers (Alice Cooper, Queen, Van Halen crossed with the music of John Lennon’s “Imagine”) were sometimes fun but ultimately non-essential endeavors. On one cover, some audience members were invited onstage and an eager young woman added some unexpected vocals to “Under Pressure” by Queen. It was provided a certain spontaneous charm but in the end the sound mixing did not match the quality of the rest of the show.

Taylor Hawkins, longtime percussionist for the Foo Fighters, is the band’s backbone and secret weapon. Contributing lead vocals on a few covers, Hawkins allows Grohl to take an occasional breather from his marathon runs across the stage and rest his excited vocal chords, but his real talent is of course his drum work; sharp, keen, and of seemingly limitless energy. Taylor Hawkins is a percussion monster and a greater drummer than even the celebrated Nirvana drummer.

The stage lighting featured a large video screen hanging on a diagonal angle which effectively emphasized the musicians without obscuring them. Well into the set, the screen was lowered to create a more intimate stage space, which spurred one of the night’s best songs on a spirited take of “Breakout” with a fuzzed out, shiver inducing wah-wah intro. “Dirty Water” presented a more laid back, dreamy style and was the most compelling song of the new material.

Grohl does not hold back in his performances; there have been occasions when his voice wears out during an extended performance but this was not one of them. “Everlong”, perhaps the band’s most celebrated and enduring track marked an end to the night with it’s iconic intro riff and received a keen execution and offered further definition to the Foo Fighter’s magic. Laying out a heaping offering of rock ‘n’ roll goodness, the Foo Fighters astonished new fans and satisfied the faithful. Almost 25 years into their career, Foo Fighters plan to rock until everlong.

The Spill Magazine is a Toronto-based online publication dedicated to covering the independent music scene with a strong focus on our thriving hometown talent. Our writers bring you up-to-date news, in-depth features on musicians and reviews for the latest CD releases. We also travel to the front lines for all local festivals including Canadian Music Week and North by Northeast. Don’t forget to check out our Facebook and Twitter pages for all daily Spill updates.
RELATED ARTICLES
dave grohlfoo fighterslive review

by Ryan Sagadore on September 15, 2016
NEVERMIND TURNS 25 As the 1980s came to an end, popular music hadn’t changed all that much. In the first few years of the ’90s, Synthpop, New Jack Swing and Hair Metal still dominated the airwaves [...]