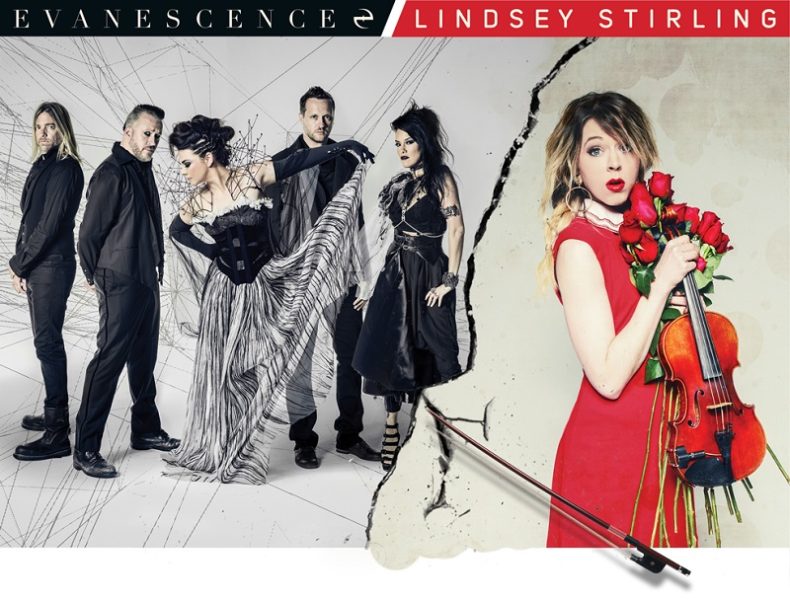 This is a case of two great forces coming together to combine strengths and create something miraculous. The highly anticipated co-headlining tour featuring the YouTube sensation hip hop violinist Lindsey Stirling with American goth rockers Evanescence made their Toronto stop at the Budweiser stage to a packed house. With their efforts combined, as fans had already seen in their joint effort with the track “Hi Lo”, and accompanied by a full orchestra provided the perfect opportunity for these two acts to showcase exactly what they do best.

Lindsey Stirling is no stranger to the Toronto stage having toured here numerous times before. This is the first time she’s had the chance to perform with a full orchestra allowing her talents on the violin to truly shine. Her performance this evening was in top form – with numerous costume changes, dancers, and new arrangements to old favourites. The production value in her show has increased exponentially making this show feel that much more refined and polished, in particular when her riser took her high over the stage in “Take Flight”.

It seems Lindsey has taken a more concerted effort to work on choreography with her dancers and it shows in numbers like her opening song “The Arena” and “Roundtable Revival”, which also featured a great “violin versus guitar” showdown, and “Mirage”.

The standout moment for Lindsey’s performance was when Amy Lee of Evanescence joined her on stage for “Shatter Me”, the stunning performance featured Lindsey and Amy haloed with glowing blue orbs, while a ballerina danced between that. It was simply beautiful to watch.

Having had multiple album releases under her belt, it’s great to see Lindsey reach back into the years and perform songs that started her journey into YouTube stardom, like “Crystallize”. Her playing on her own, pirouetting across the stage without missing a single note, while the dazzling ice cave footage where she shot her music video played on the screens behind her reminded me just how I felt when I first saw the video and knew there was something quite special behind this young lady with the violin.

Another element that Lindsey is also known for are her medleys that pay tribute to video games, musical theatre, and other facets of “geek culture”. Not to disappoint her fans, Lindsey capped her performance with her “Phantom of the Opera” medley that sent the crowd to their feet.

After an intermission, Evanescence took to the stage with a full orchestra; the band spent most of the performance seated in front with Amy Lee taking center stage in a resplendent dark green ball gown, commanding the stage like the prima donna of an opera. Fans who are used to Evanescence being a hard rock act would have found this performance a departure from the norm. Rather than being a show that would be heavy on the guitars, the orchestra – featuring musicians hand-picked specifically for this performance only with arrangements that they had only just recently learned – and Amy’s richly emotive voice were the pinnacles here with the band blending in.

This created the perfect backdrop for Evanescence’s more symphonic songs like “Lacrymosa”, “Lost in Paradise”, and “Lithium” which the orchestra took to beautifully.

This performance featured a number of songs off Evanescence’s latest album Synthesis which is comprised predominantly of darker, moodier, and slower paced tracks which came to life in this setting.

It has been well over ten years since I’ve seen Evanescence perform live. Generally, they were a band that I loved at a younger age and had grown out of. Seeing them now, with the new lineup, they are a band that has certainly matured with age and fare better as a melodic orchestral band with rock elements rather than a heavy rock outfit. This performance allowed for the best parts of Evanescence to shine – grandiose and wide-sweeping anthems that take fans on a journey into their inner darker selves.

Taking fans back to the very beginning of the Evanescence journey, they had the crowd cheering with “Bring Me to Life”. Having not been as on the pulse with all things Evanescence as I used to be, I didn’t know that “Bring Me to Life” no longer contained the male vocal parts which I was surprised to hear.

Taking fans even further back, I was surprised to hear them perform “Imaginary”, a song that was included on their Origins album that was released long before “Bring Me to Life”.

Further surprising their fans, Evanescence dove into a few covers including The Beatles’ “Across the Universe” which the crowd loved. If ever a moment could be described as ‘magical’, this would be one of them.

A couple of other highlights during the show included “Hi Lo” where Lindsey Stirling took the stage again to offer her violin to the collaboration to a rather intense and dramatic song, and “My Immortal”, which is as heartbreaking and gorgeous now as it was years ago. The crowd responded by breaking out their cell phone lights creating a sea of stars.

During the encore, Lindsey joined Evanescence on stage again to perform a certainly unexpected mash up of Ozzy Osbourne’s “No More Tears” and Sia’s “Alive. Lindsey’s intro into the mash up featured what I will always remember as the music from the De Beers’ diamonds commercial (actually Karl Jenkins’ “Palladio”) which immediately brought the crowd to their feet.

For fans of Lindsey Stirling or Evanescence, this was a show not to be missed. For fans of both, this was a monumental performance. This was a fantastic show brimming with great music and unique memorable moments that fans will hold on to.

Samantha is both a writer and a fan of the arts and has been able to find numerous ways to pair the two. Eager to dive head first into writing for Spill, Samantha is an avid partaker and reviewer of live art in Toronto serving as an editor at Mooney on Theatre exploring live local theatre, she's a photojournalist for Been Here Done That, a travel, dining and tourism blog that focuses on Toronto and abroad and previously for Lithium Magazine. She's passionate about music, theatre, photography, writing -- not necessarily in that order. She drinks tea more than coffee, prefer ciders over beers, and sings karaoke way too loudly. You can follow her on various social media including Facebook, Twitter, and Instagram.
RELATED ARTICLES
budweiser stageevanescencelive review