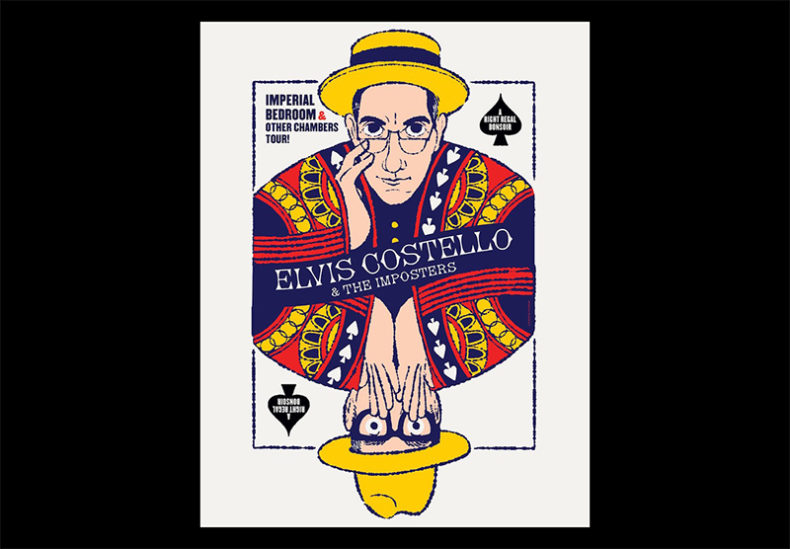 When Elvis Costello & The Attractions first released Imperial Bedroom in 1982, it stood out. It wasn’t Thriller. It wasn’t synthpop. The album sounded nothing remotely close to what was happening in the pop scene. Even in a discography as vast as Elvis Costello’s, it is one that sounds like no other. It’s a mature record that explores genres as varied as jazz and baroque pop. The album of course, like every other album he released during that era, it was well received but due to its ‘60s sound and depressing overall lyrical themes, the album never took off. So, when Costello announced that he was taking the 35-year-old album on tour, it seemed a rather odd choice. But a good one nonetheless.

Costello, along with the Imposters and two female backup singers took the stage at Toronto’s Sony Centre a few minutes after the scheduled show time and jumped right into a pumping version of “The Loved Ones”, which was quickly followed by “…and in Every Home”, and song which he blended the Beatles “All You Need is Love”.  From the first two-tracks he had the packed Sony Centre in his pocket.

Taking a break to chat, he cracked a few jokes about the not so lighthearted topics of Imperial Bedroom and decided to give the audience a break from the “songs of misery and heartbreak” and played “Accidents Will Happen”. After a few throwbacks from the ‘70s, Costello went right back into an uplifting set-list that included “The Long Honeymoon”, “Shabby Doll” and “Tears Before Bedtime”.

After only an hour, Costello and Co. waved and walked off the stage. Costello, would soon reappear for his encore (which would last over an hour) with his backup singers and go into a goose bump inducing rendition of “Alison”.  While mostly playing renditions of Imperial Bedroom tracks, Costello and his band did throw in quite a few classics like “King Horse” and “Watching the Detectives”, the latter beginning with a gimmicky police siren, but somehow seemed to work.

Not only was the show sonically brilliant, but visually appealing too; above the band was a digital screen  which displayed album covers of his past, such as Get Happy!! and Spike; all which had been adapted to the cubist style that Imperial Bedroom’s dawned.

After wrapping up the Imperial Bedroom material with “Man Out of Time”, Costello sent the audience home with spine-tingling versions of “Everyday I Write the Book”, “Pump it Up” and “(What’s So Funny ‘Bout) Peace, Love and Understanding”. By this time everyone was out of their seat, either clapping singing or dancing or all of the above. It was a terrific send off to a truly moving evening.

As a child growing up in the suburbs, Ryan found music as a way to soothe his boredom. After first hearing AC/DC at the age of 10, he was hooked on music. Tracing its roots to the ‘50s, he became obsessed with Elvis, Buddy Holly and Chuck Berry. Somehow that led to grunge, then psych-rock, then jazz, etc. The list goes on and on and his collection of vinyl records continues to grow.
RELATED ARTICLES
live reviewthe sony centretoronto